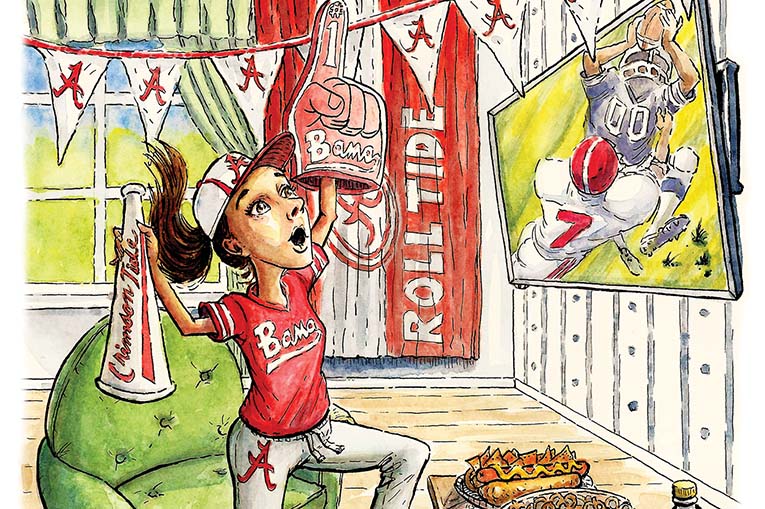 This time of year, I start counting down the days until college football, the CBS Sports theme song playing in my head. Maybe it’s because it’s so hot, and football means fall is coming. Or maybe I’m just getting nostalgic, thinking of all the memories tied to football, the same way people feel around the holidays.

My apologies to the Gators, Knights and Seminoles, but I’m a Bama girl. In Alabama, team loyalties are decided at birth. Our elementary school was divided into two groups of students and teachers: the Auburn fans and the Alabama fans. Every Friday, our cafeteria was a blur of orange and blue, crimson and white. On Saturdays, if my dad wasn’t watching the game on TV, he listened to Alabama play on the radio. Everyone loves their home team’s commentator, and Eli Gold has been ours since I was 8 years old. Hearing his voice today brings back a flood of memories—and a hankering for Golden Flake potato chips.

I can still remember the 1993 Sugar Bowl when Alabama beat the Miami Hurricanes to win their first national championship since Bear Bryant. I was 12, jumping up and down as Alabama’s George Teague stripped the ball from Lamar Thomas to prevent a touchdown.

When I was 18, I went off to the University of Alabama like many relatives before me. For the first game day weekend, my blind date picked me up in the lobby of my freshman dorm. We made an entire weekend of the games, starting with band parties Friday night before going with our dates to the Saturday game, always wearing our best outfit. My date, Bryan, was a Sigma Nu, the same as Bear Bryant, so his fraternity actually wore a suit and tie to every game in his honor, even in late August. Bryan was a year older than I in school, so he taught me the fight song and filled me in on all the returning players—although we were not great in the late ’90s.

Bryan and I ended up dating for five years and then got married. This fall will kick off our 23rd season together. So as not to interfere with football, we were married in August and back from our honeymoon in time for the first game.

Back then, football was the center of our lives. We lived for the games. I can still taste the stadium dogs slathered with ketchup, mustard and kraut washed down with a Coke and two miniatures of contraband bourbon.

In my younger days, I went to every game no matter what. I nearly passed out in the blazing sun at a September game against Vanderbilt and nearly froze to death in the sleet against Auburn one late November. During time-outs, I ran to the bathroom to warm my fingers and toes under the hand-dryer. We lost 9-0, but Bryan and I stayed until the end, along with my brother, who was attending Auburn at the time. Like many families at the Iron Bowl, we were a house divided.

Over the years, we’ve attended fewer and fewer games in person. While my passion hasn’t waned, I’m too tempted by my comfy sofa, my big-screen TV, the virtual yellow first-down lines and convenient instant replays. There are no parking headache nor traffic snarls, and we still yell just as loud, pretending the players—and coaches—can hear us.

Many experts are predicting that because of COVID-19, fans won’t be allowed in stadiums this fall. Others are saying there won’t be college football at all. Saturdays down South may never be the same. After a spring and summer of social distancing, it seems unlikely 100,000 people will cram into a stadium, hug one another after touchdowns or share tailgating food.

The last time college football was disrupted was in 1918 during World War I and the Spanish flu pandemic. The season was actually postponed until November. Just like in 2020, schools, churches and many public places were closed. The Atlanta Journal Constitution printed an article earlier this summer about a Georgia Tech game in 1918 where the fans wore masks and were told they could not cheer.

But football went on then, and eventually it will for us, too. When the time is right, we will come together again. One day soon, we will emerge from the dark into the bright sunshine of the stadium. We’ll once again feel the anticipation, energy and electricity of game day. Our loud cheers will tune out the rest of the world, and for a few hours, strangers will unite, and nothing else will matter but football.