Extra Pulp: Beneath the Surface

For her final column in Orlando magazine, Laura Anders Lee explores the impact of systemic racism and broadens her perspective. 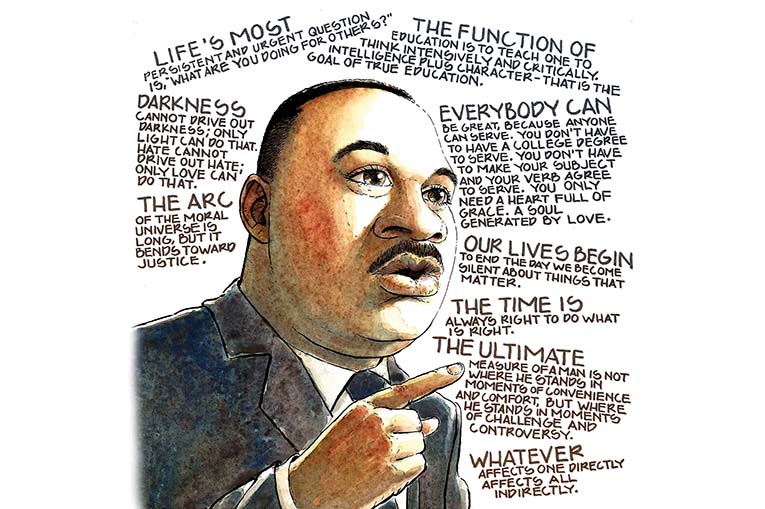 My sons attend an elementary school that implements Franklin Covey’s “Leader in Me” program, focusing on the seven habits of highly effective people. Habit 5 is seek first to understand, then to be understood. We all see the world differently, but the problem is we think we see things the same. We don’t often consider the experiences of others who are different from us.

An African American family recently attended an event at our mostly white church, and they looked a little uncomfortable, even nervous. We smiled and greeted them, and later I asked my 10-year-old how he would feel if he were the only white person in a room of 100 Black people. He paused for a moment and answered honestly, “I would feel a little odd.”

Growing up in the ’90s, I was taught to be color blind. I went to public school, where I had Black friends. But I never thought to ask them about their experience as an African American. I never considered what it felt like for them to be the only Black student in a classroom, at a party, on the volleyball court, or on our class trip to Europe. I never considered if they felt uncomfortable or even mistreated. I assumed we were all equal.

Years later, as an adult, I was interviewing a Black woman for an article and told her I believed we were all the same. She laughed and shook her head. She took my hand and ran it through her hair. “Does my hair feel the same as your hair?”

It didn’t. As we continued to talk, I realized how naive I’d been all those years. It wasn’t just our hair or our skin color, but our day-to-day experiences—our access and opportunities—that were different. More than 50 years have passed since the Civil Rights Movement and still segregation is everywhere—in our neighborhoods, our schools and sororities, our churches, even our grocery stores and voting sites.

The year 2020 was like a bad storm that wreaked havoc everywhere. But it also exposed big issues at our very foundation. Events in 2020 certainly opened my eyes—not just to the cases of George Floyd, Breonna Taylor and others, but to the personal experiences of my non-white friends. The Black Lives Matter movement emboldened them to share their stories of prejudice on social media.

Dear friends of ours in Orlando who are a mixed-race family confessed they are often asked to show their neighborhood association ID card at the community pool, something that has never happened to my family.

Another friend of mine, a Black pediatric surgeon, shared that when she went to a hotel conference room to take her medical board exams, she was mistaken for staff. And later, when she was getting ready to operate on her patient, the 4-year-old white girl told her she wouldn’t let a Black person touch her.

Systemic racism is rampant, and not only have I been immune, I’ve been blind and deaf. I was only seeing the world through my own eyes.

Both my friends were in places where they belonged, but were questioned and misjudged because of their skin color. On several occasions, I have sneaked into swimming pools and posh hotels where I wasn’t even a resident or a guest, and I was given the benefit of the doubt.

I recently heard an inspiring sermon about how there are two worlds: the world that is and the world that should be. And it’s our job as good human beings to be the bridge.

It’s the start of a new year and the perfect time to ask, “What do we think the world should be?” Are we giving every child, every person an equal opportunity at success? Can we be kinder and more accepting to those who are different?

No two people experience the world in the same way. My boys are 8 and 10, and already they are learning to listen to people who are different. They are learning the importance of understanding another’s point of view before sharing their own perspective.

One of my New Year’s resolutions is to start having open conversations with others. Instead of avoiding sensitive topics, I’m ready to ask important questions. I’m ready to listen to people with different experiences than my own—whether they are a different race, social status, sexuality or have a different political belief.

When we start listening to one another and seeing the world through a different lens, we’ll get closer to the world that should be.

This article appears in the January 2021 issue of Orlando Magazine.
Categories: Column
Tags: extra-pulp, laura anders lee
Want to read the whole issue? Download and read this issue and others on Magzter.

Editor Letter: Happy Birthday All Around