Extra Pulp: An Ode to Magic 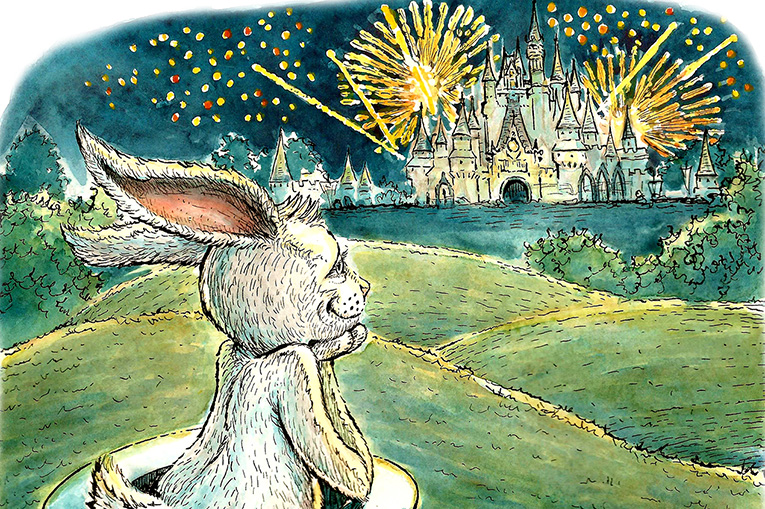 Orlando kids are the luckiest on the planet. Some families grow up around the beach, forest or mountains, but we have the magical world of theme parks. Local kids don’t have to wait for a once-in-a-lifetime vacation to live out their wildest fantasies. Magic can be found all around the city, with or without a theme park ticket—you just have to know where to look.

This time of year, you can gaze up in the sky south of town and see a bouquet of hot air balloons. In the still quiet of dawn, you might even hear the breath of fire as the balloons lift higher and higher in a brilliant kaleidoscope of colors. Every night of the year, fireworks can be seen and heard from Kissimmee up to Windermere. Any parent within a 10-mile radius of Disney World can set their bedtime clocks to them.

When my husband and I first moved to town with two young boys in tow, we rented a small apartment, our youngest sleeping in his Pack ’n Play in the kitchen. Instead of joining a country club, a tennis complex or a gym, we bought Disney annual passes. We escaped our close quarters three or four times a week to embark on wonderful family adventures.

Not knowing anyone yet in our new town, our family of four spent all our free time together. Orlando gave us a passport to see the world without ever leaving the city. We shivered with Antarctic penguins at SeaWorld, marveled at model trains at Epcot’s Germany, and went on African safari at Animal Kingdom. We discovered worlds made entirely out of LEGOs, wandered the streets of Harry Potter’s London and entered Beast’s castle through a secret passageway.

Unlike our out-of-town friends who endured hot, marathon days at the theme parks, we came and went at our leisure. Going to Disney World became part of our weekly routine. Instead of buying theater tickets, we introduced our sons to Broadway at Festival of the Lion King. Instead of paying zoo admission, we found tigers and Komodo dragons on the Maharajah Jungle Trek. Rather than visiting a playground for a Sunday picnic, we took our Publix fried chicken to Tom Sawyer Island. As frequent visitors, we were able to appreciate the nooks and nuances of the parks. We could spend an afternoon solely at the Epcot aquarium or a morning at Magic Kingdom simply completing a scavenger hunt.

When my children were younger and still wide-eyed and enchanted, seeing the magic of the parks through their eyes never got old. They were utterly amazed that we could watch Toy Story and Star Wars or read Curious George and Cinderella, then actually meet their favorite characters in person. The pages and the screen came to life before their very eyes.

On weekends, we set out to discover magical spots around town to transport ourselves to faraway places. We visited Animal Kingdom Lodge to spot zebras and giraffes, savored sugary beignets at Port Orleans, and took water taxi rides from CityWalk to Portofino Bay for gelato. We watched fireworks from Disney’s Boardwalk, rode ponies at Fort Wilderness and took our little Cars fans for a walk through Radiator Springs at the Art of Animation resort.

On our outings together, my husband and I got to be the carefree, fun-loving versions of ourselves. Work was far from Bryan’s mind as he sped through Aerosmith’s Rock ’n’ Rollercoaster over and over. While I always brought in our own snacks and drinks to save money, I allowed everyone to splurge on a Mickey Mouse ice-cream bar.

The holidays have been especially magical in Orlando. We’ve oohed and aahed at the Macy’s Holiday Parade at Universal Studios and filled our souls on Christmas Eve at Epcot’s Candlelight Processional. Orlando has spoiled us for being anywhere else during the holidays. It’s difficult to be impressed with a mere display of 100,000 lights when you’ve seen the Osborne’s 5 million that lit up Hollywood Studios for two decades. And driving around an ordinary neighborhood at Christmastime is underwhelming when you’ve visited Celebration, where snow falls in downtown nightly and where residents light up entire streets with elaborate displays, special effects and animatronic characters all synchronized to music.

Orlando’s enduring magical spirit gives us permission to be silly, childlike and forget our grown-up responsibilities not just at the holidays, but year-round. In a world where reality can be hard to swallow, Orlando is a refreshing reprieve. Our children can escape to a special place that encourages their dreams, fosters their imagination and allows them to play pretend. And a little pixie dust is good for us all.

This article appears in the November 2019 issue of Orlando Magazine.
Categories: Community
Tags: anders, extra-pulp, fantasy, laura, laura anders lee, Magic
Want to read the whole issue? Download and read this issue and others on Magzter.