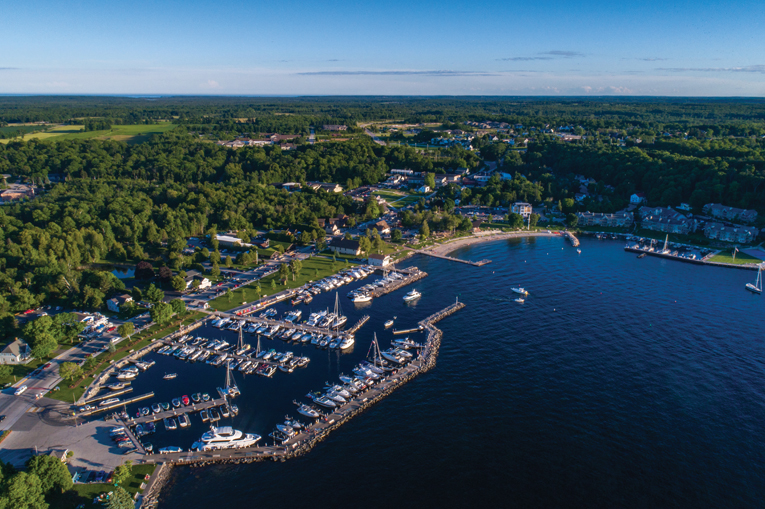 The beauty of a trip to Door County, Wisconsin, the peninsula nestled between Lake Michigan and Green Bay, is that you won’t encounter any golden arches. No McDonald’s, no Dunkin’ Donuts, no Taco Bell. Instead, a drive on country roads alongside pastoral scenes of red barns, glistening silos and verdant pastures dotted with black-and-white dairy cows will have a relaxing utopian effect on anyone eager to escape urban life.

The villages along both coasts exude a storybook enchantment created by Scandinavian farmers who settled here in the late 19th century and, more recently, folks looking for artistic outlets and entrepreneurial opportunities. Although summer’s peak season draws crowds, the shoulder months of April and May, with cherry orchards in full bloom, and late-September through October, when fall foliage pops with color, are ideal for a visit, too. And during the frozen winter months, ice fishing is a popular pastime.

Once you fly into Green Bay (Titletown USA to Green Bay Packer fans), hop into a rental car and head north.

From Sister Bay, one of the more popular villages, pontoon boat captains with Sister Bay Scenic Boat Tour depart for sunset cruises on Green Bay. Sail past towering bluffs of jagged limestone, known as the Niagara Escarpment, a massive layered cliff stretching as far as Niagara Falls. Jutting from its crevices are northern white-cedar trees. The boat glides past Peninsula State Park, home to Eagle Bluff Lighthouse, with its distinguishing red roof peeking out from the forest. Farther into bay waters, the captain pauses at Little Strawberry Island, where white pelicans spend the summer before migrating to Florida’s Gulf Coast. 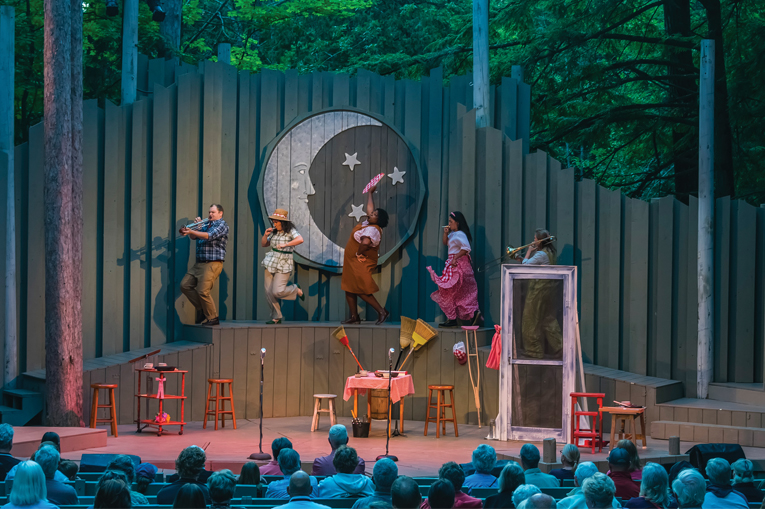 Sister Bay is also home to Door County’s most famous eatery: Al Johnson’s Swedish Restaurant and Butik. Crowds congregate in the biergarten to gaze at the shaggy goats perched on the restaurant’s sod-covered roof. As the story goes, in the 1970s Al Johnson had the building constructed with Norwegian yellow pine in Norway and shipped in pieces to Sister Bay. Keeping with Scandinavian tradition, he covered the roof with grass. A friend playing a prank put goats on his roof; to this day, the wide-eyed, bearded creatures remain, providing visitors with an Instagram moment. Dining here is just as much fun. Dirndl-clad waitresses serve Swedish meatballs, pancakes with lingonberries, and the most delicious perch, plucked from Lake Michigan and fried to perfection.

A must-stop in Sister Bay is Seaquist Orchards Farm Market & Bakery. Octogenarian Dale Seaquist and his family have been growing Montmorency tart cherries since his grandfather bought 700 trees for 6 cents each in 1896. Today the Seaquist farm’s annual production is about 6 million pounds of cherries, and the canning kitchen turns out 300,000 jars of jams, jellies, sauces and syrups. However, it’s the fresh cherry pie, with its tart-sweet filling set in a flakey crust that will send your taste buds to heaven. 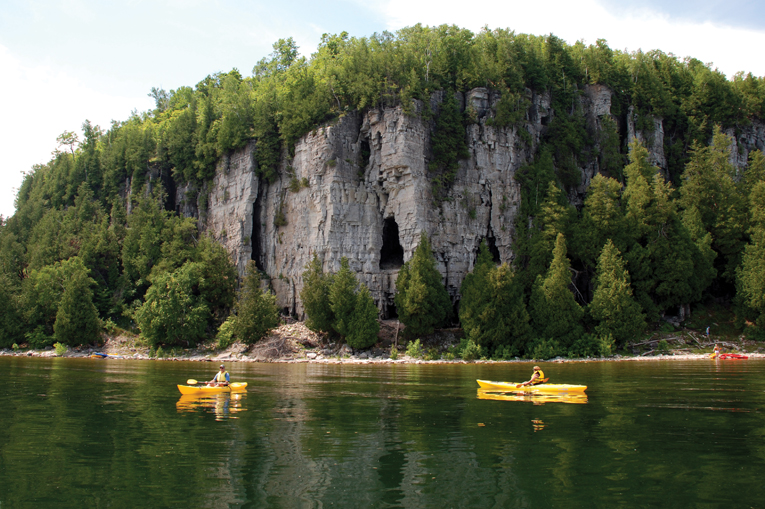 Just south of Sister Bay lies Fish Creek and Peninsula State Park. Tucked among the park’s trees is a pine-rimmed, 650-seat amphitheater, home to the Northern Sky Theater. Evening productions are written for a local audience, providing out-of-state visitors with a window into Wisconsin’s culture. An old-fashioned popcorn wagon helps to give this dog-friendly venue its laid-back vibe.

Another performing arts group to take advantage of Door County’s nature is Peninsula Players Theatre in a Garden. Situated on the edge of the water, its open-air lobby with views of Green Bay, a Door County Brewing Co. beer truck, and bonfires at intermission adds to the summer-theater experience. The professional company attracts quality actors from as far away as Los Angeles and New York. Broadway-
inspired shows are performed in an open-side theater surrounded by a cedar forest.

Although more than 20 art galleries are scattered throughout Door County, Fish Creek’s Edgewood Orchard Galleries is noteworthy for its Sculpture Garden. A figure-eight path weaves through white paper birch trees. Life-sized metal sculptures of foxes, bears and birds, as well as contemporary geometric pieces, are strategically placed for viewing. 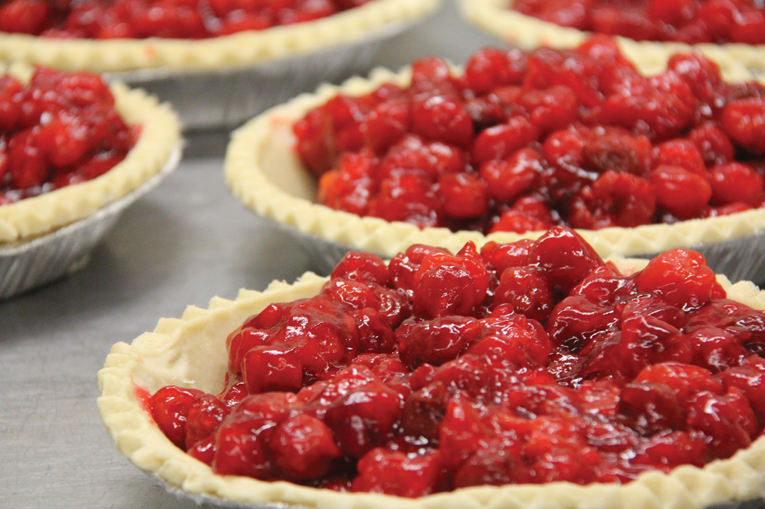 Wisconsin scores big for cheese and beer, and you’ll find both in Egg Harbor. At Wisconsin Cheese Masters, a display case is filled with artisan cheeses produced throughout the state, and a big board lists some 66 cheeses by category, from Wisconsin originals and cheddars to blue cheese and Gouda. Be sure to sample Colby and brick, two classics created by Wisconsin cheese makers.

One Barrel Brewing was Madison’s first nanobrewery. After success in the college town, the company opened a taproom in Door County. Topping their list is Door County Trolley Red, a German-style light lager brewed with cherries. Other favorites include the malt-forward Sturgeon Bay Scotch Ale and hoppy Penguin Pale Ale. 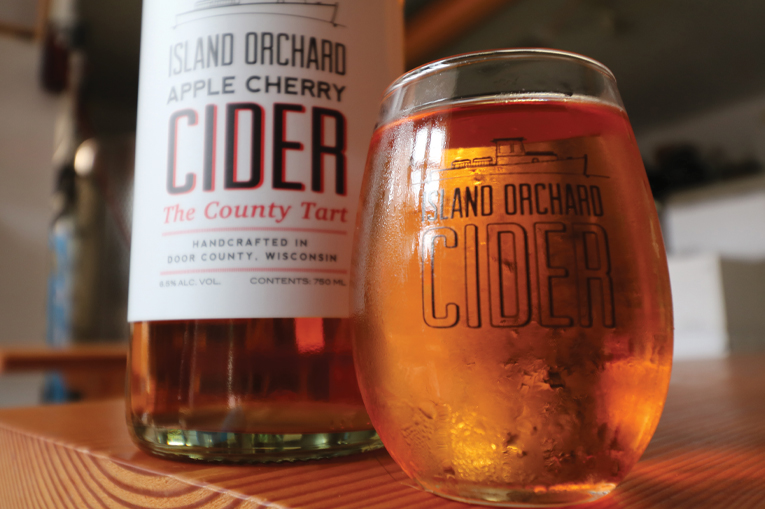 Travel to the village of Ellison Bay for apple ciders. The area’s orchards were the inspiration for Bob Purman, owner of Island Orchard Cider and a 40-acre farm on nearby Washington Island. In 2011 he launched his commercial production and soon after, his Door County Cider House where you can sample Brut Apple Cider, a 14-apple-blend champagne-style cider, and other varieties.

Catching whitefish in the neighboring waters is what Charlie Henriksen has been doing for some 40 years. Today, he and his son continue the tradition at Henriksen’s Fisheries and Fish House. In fact, diners can expect Henriksen’s morning catch to be on their dinner plate that evening in local restaurants. You can buy fillets, fish cakes and spreads at his retail store. doorcounty.com

In 1974, Door Peninsula Winery opened in an old school house built in 1868. Over the years, the Carlsville-based company added a distillery and kicked production up to include 64 wines and ciders and 18 liquors. store.dcwine.com/winery

Go to Door County’s Lake Michigan side for dinner at Clover & Zot, a chic Euro spot in Baileys Harbor. Beer drinkers love the extensive menu of European beers, including 16 Belgian brews. Share plates of arancini and duck poutine near the water’s edge. cloverandzot.com

Fly from Orlando’s MCO to Chicago, followed by a connecting flight to Green Bay. Rent a car and drive north on Highway 42/57, which eventually splits with 42 going west along Green Bay’s side and 57 east along Lake Michigan’s side.

This article appears in the January 2022 issue of Orlando Magazine.
Categories: Travel
Tags: Door County, Green Bay, Lake Michigan, wisconsin
Want to read the whole issue? Download and read this issue and others on Magzter.