Orlando boasts a half-dozen attractions that challenge you to think outside the box in order to leave the room. Puzzled? Read on.

It’s Saturday afternoon and Autumn Sirmeyer has just spent the last 59 minutes and 50 seconds searching through every inch of a room on the second floor of a downtown Orlando building. She, her husband and seven of her co-workers at Freedom Middle School have thrown open cupboards, turned over props and peered under tables in a space strategically designed to challenge the group’s sleuthing powers of intellect, logic and creative thinking.

With 10 seconds left on the clock and the background music intensifying to an audible climax, her husband finally pounds the correct combination into a lock box, pops open the key and unlocks the door. “Everyone is cheering,” says Sirmeyer. “And then you realize you can’t wait to go back and do the next one.”

This is Sirmeyer’s second visit to The Great Escape Room, a real-life escape game in downtown Orlando that places participants in a locked room with 60 minutes to think their way out.

It’s one of six such attractions in the Orlando area, all slightly varied iterations of a concept popularized by video games and gaming apps such as Myst, Doors & Rooms, Forever Lost and The Room, which challenge players to uncover clues and solve puzzles in order to advance or escape.

In 2007, some savvy techies in Asia got the idea to bring these electronic games into the real world. Now these entertaining tests of wits have popped up all over the U.S.

The concept is pretty simple: Participants enter a room filled with hidden clues and puzzles, which, when found and solved, lead to the opening of the door or the solving of the mystery. (Don’t worry: Fire code mandates that participants have the ability to exit at any time.)

Wherever you go in Orlando, you’ll never encounter the same story line twice. It’s a Trap!’s “Imprisoned Creatures’’ game follows a fantasy theme of wizards and dragons with a real character that enters the room. Inside Escapology’s “Shanghaied’’ room, you’re on a boat trying to flee a life of accidental slavery. And with “Crisis at 1600’’ at America’s Escape Game, you’ll be trying to disarm a missile inside The White House and thwart the plans of a devious paramilitary group.

“Each room has puzzles and clues that link to different padlocks that will eventually get you out of the room,’’ says Kimberly Shepherd, Escapology’s marketing director. “And we have game masters who watch from outside of the room and will come in to give hints if you need them.’’

The Great Escape Room uses a Sherlock Holmes theme and lots of bygone artifacts—like a turn-of-the century phonograph and a replica antique telephone—to set the tone in each of two rooms. Creator Howard Sakowitz, with help from his son, crafted dozens of clues and codes to crack. 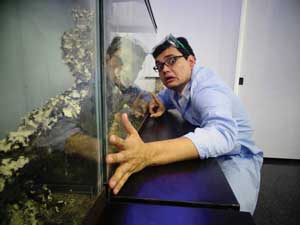 courtesy of it’s a trap!

Performer Henry Gibson is part of a story line at It’s a Trap!

“The people who do the best are the people who do it as a team effort,” says Sakowitz, who touts only a 20 percent success rate for his puzzles. He books up to 10 participants per room, placing smaller groups together to max out each time block. “Enthusiasm helps and being a keen observer. And you can’t get caught on one logical train of thought.’’

He estimates about 10,000 people have played his Orlando game, thousands more in his expansions in Tampa, Miami, and in Royal Oak, Michigan.

Sakowitz wasn’t the only one to notice the trend. Within a few months of The Great Escape Room’s opening in June 2014, It’s a Trap! debuted in Winter Park, followed by Escapology on International Drive in December. Three more openings followed in the spring.

Most of the attractions use some sort of camera monitoring system to watch participants and give hints when needed via a screen or microphone. Some use one room filled with props while a few feature elaborate sets with multiple chambers. The size of the groups and the minimum age requirement vary, with some escape room games being more family-friendly than others.

There are also varying degrees of difficulty. At Escapology, for example, it doesn’t take much to get a helpful hint and kids as young as 6 are welcome. Staff at America’s Escape Game aren’t so forthcoming: Participants get three hints gratis, and anything after will cost them time off the clock. No cell phones are allowed inside any of the venues to ensure participants don’t cheat.

While Winter Park and downtown’s escape rooms focus primarily on the local market, the four attractions in the International Drive area are banking on interest from the massive number of tourists flocking to Orlando each year and the seemingly endless stream of convention-goers hungry for new and interesting team building activities.

“It’s unique. It gets people using their imagination and searching all around. There is nothing else that compares to it,” says Sakowitz. “When you do this, you’re doing a different experience, something you’ll talk about for weeks after.”

Adds Debra Beardsley, co-owner of It’s a Trap!: “I think we are so attached to our screens that we’re craving interaction again. People want to touch things and talk to people.”

This article appears in the June 2015 issue of Orlando Magazine.
Categories: Art & Entertainment