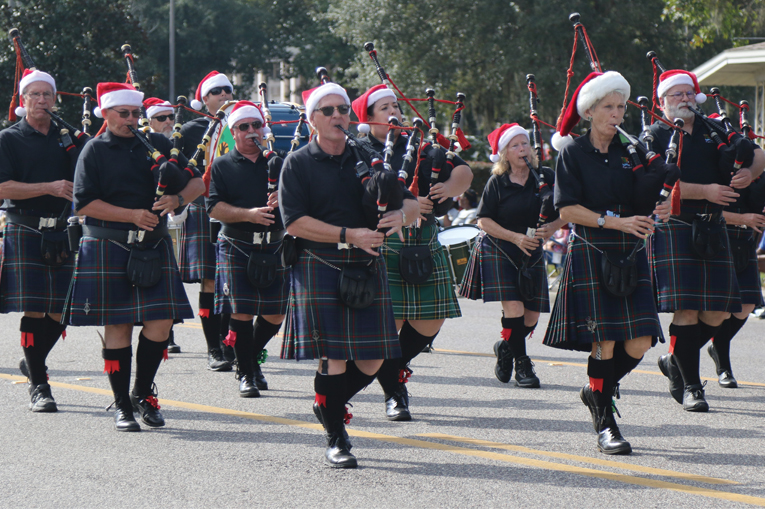 At 70 years, Winter Park’s holiday parade is the oldest in Central Florida. It’s a big deal, and the celebration rolls for an hour and a half.

The parade attracts thousands along its route from Park Avenue south to New England Avenue, where it finishes at Hannibal Square. Over 80 organizations take part, including scout troops, elected officials, dignitaries, marching bands, and schools, such as Winter Park High School and Full Sail University.

Parade sponsor The Winter Park Chamber of Commerce is presenting its special float this year, one that announces an upcoming milestone.

“The Winter Park Chamber of Commerce turns 100 in 2023, and we will kick off that celebration with a Centennial float carrying our current and past board chairs at the Ye Olde Hometown Christmas Parade,” says chamber President and CEO Betsy Gardner Eckbert.

This year’s Grand Marshal is David Odahowski, president and CEO of the Edyth Bush Charitable Foundation. Emceeing the action is the always-entertaining Scott Maxwell, an Orlando Sentinel columnist.

They invite parade participants and viewers to wake up to a pancake breakfast with all the fixings at 7 a.m. in Central Park, hosted by the chamber’s Leadership Winter Park team. 9 a.m. Saturday, Dec. 3. winterpark.org CV

The Apopka Christmas Parade is one of the premier community events of the year and easily draws over 25,000 people each December to see the rolling celebration.

For some perspective, the city has a population of about 57,000 people. So, a crowd of almost half the population size flocks to the Indoor Foliage Capital of the World to immerse themselves in the joy of one of the largest holiday parades in Central Florida.

The Foliage Sertoma Club of Apopka and the City of Apopka sponsor the parade, which is judged this year by Ybeth Bruzual of Spectrum News 13 and Trudy Wild, director of Public Grants & Advocacy for United Arts of Central Florida.

“This year’s parade theme is ‘A Festive Florida Christmas!’ and I am certain we will not be disappointed in the community’s creativity when it comes to parade entries,” says Lorena Potter, club president, and parade chairperson.

The parade begins at 10 a.m., and spectators line Park Avenue at least two hours before for the best viewing and odds of catching holiday goodies being handed out by participants. 10 a.m. Saturday, Dec. 10. foliagesertoma.org CV