For most of us, the I-4 Ultimate reconstruction project is something to be endured. But for one photographer, the massive man-made project is nothing short of a visual feast.

For Orlando commuters, the I-4 Ultimate Improvement Project is a gauntlet to be feared and endured. For Steven Benson, it might as well be a national park.

Benson, an award-winning photography professor who teaches at the Southeast Center for Photographic Studies at Daytona State College, has a longtime interest in capturing the images that emerge when landscapes undergo rapid, large-scale transformations—from majestic to quirky, from awe-inspiring to poignant.

Fifteen years ago, he chronicled the construction of the Three Gorges Dam, a project that submerged 250,000 acres of Chinese farmland along the Yangtze River beneath a 90-foot-deep reservoir, displacing millions of people. One of his favorite photos is a portrait of a small group of villagers who had welcomed him into their doomed farmhouse. On impulse, he left the lens open for five seconds. Some of the people in the photo, having shifted their positions just slightly in those few seconds, are blurred as if already fading away.

Benson, who lives in downtown Orlando, is considerably closer to home with his latest project, which encompasses both the I-4 improvements and other roadway construction vistas that catch his eye between here and Daytona Beach.

For the past three years, he has patrolled the construction zone in a 2012 Honda Insight with 125,000 miles on it, carrying two Nikon D750 cameras so he doesn’t have to switch lenses in the midst of the dust, decked out in a typical construction-zone ensemble featuring hardhat, bandanna and work boots.

Which is not to say that he fits right in.

“At a certain level I’m comfortable in the environment,” he says. “On the other hand I have totally different goals from anyone else who’s there. Everything they are focused on has to do with physics—weight loads and gravity and water runoff. I’m looking at it from a creative standpoint. It’s like a left brain versus right brain thing.”

Construction engineering is all about predictability. Benson wants to be surprised—actually, “enthralled” is the word he uses to describe the feeling of discovering, say, a circular arrangement of upright rebar that will eventually be encased in a concrete column.

Benson has a soft-spoken, contemplative presence. When he talks about his meanderings through borrow pits and storage facilities he can sound like Thoreau dreaming away in his cabin by the lake, and he clearly has considerably more patience than the commuters zipping by alongside his construction hunting grounds.

He took a series of photos of rebar and support columns from a low angle, looking straight up at the sky. Once, noticing the presence of low-flying airplanes during a nearby sporting event, he waited until he could capture an image of one of the planes, dead center in the sky above the metallic grove below.

One of those times was the moment he sensed rather than saw a perfect circle of blue materialize amid a bank of clouds to hover, just above the horizon, at the end of a stark pathway cut through piles of bulldozed dirt. It looks like a runway to heaven. 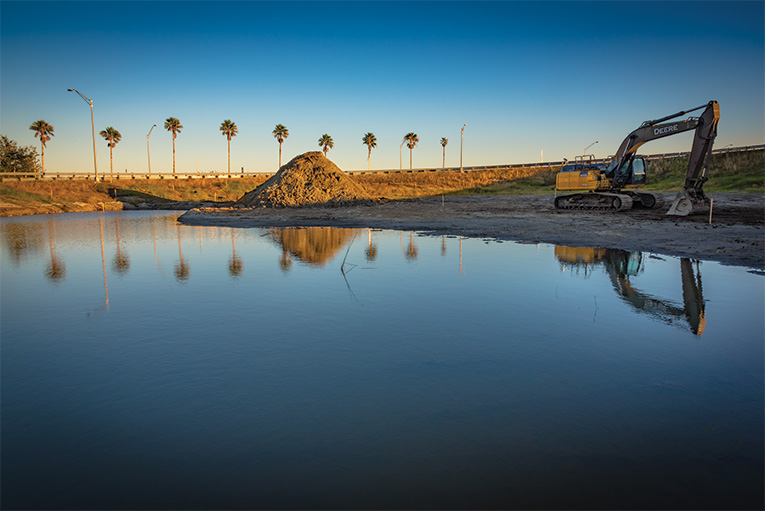 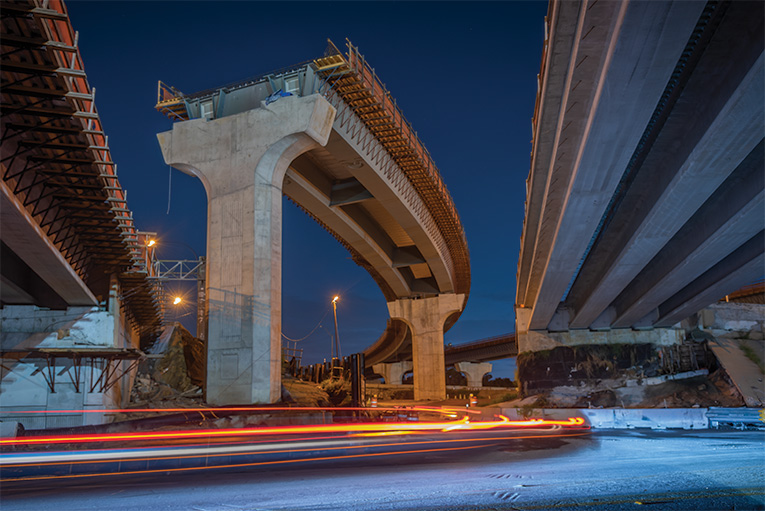 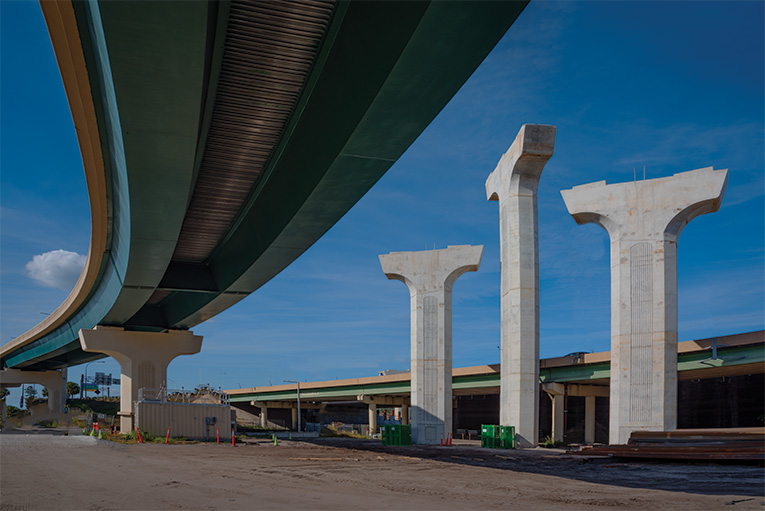 Benson says many of the images he runs across give him a sense that he’s getting an otherworldly anatomy lesson rather than simply documenting an earthbound construction project. Here, there’s a hint of the biomorphic and an odd sense of a vulnerable underbelly in the metallic reinforcing ribs beneath an overpass in the making. 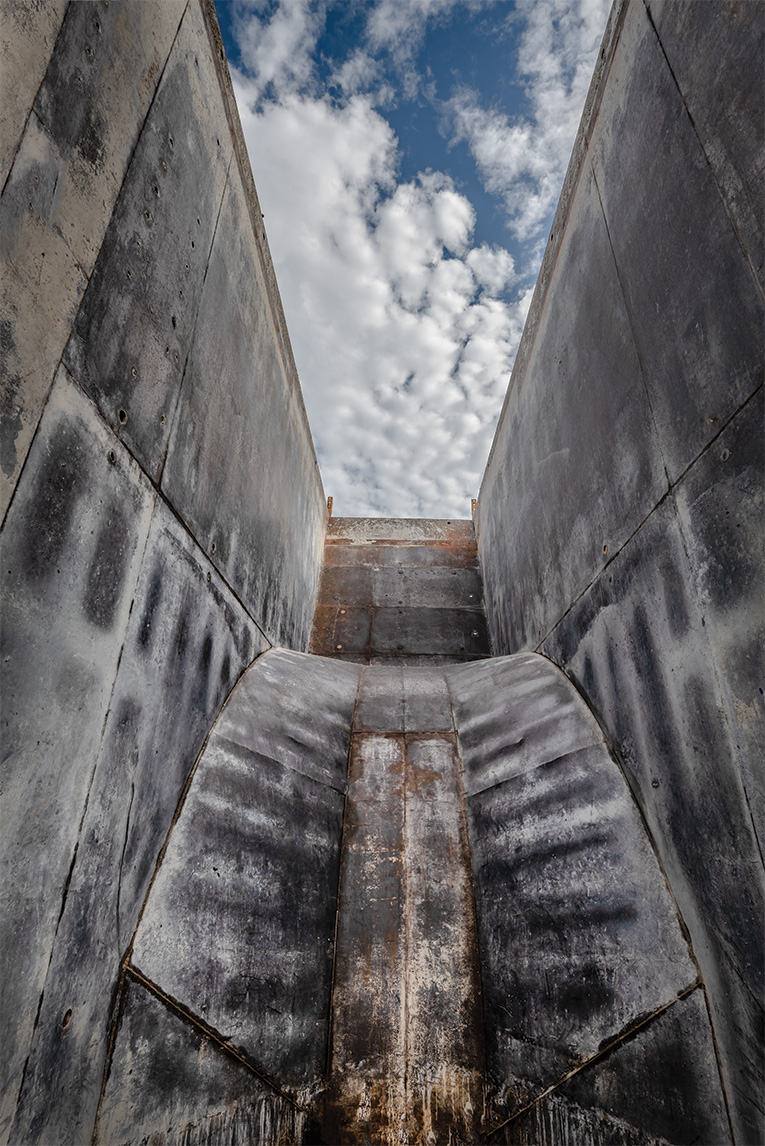 An artist friend told Benson that the massive mold above, used to cast the concrete support columns, looked like a painting. He had the sense, when he saw it, of stumbling onto the set of a science fiction movie. “It looks like Mad Max and Alien spawned  a child,” he says. “Or that I stumbled onto an alien spaceship, and they left the door open.” 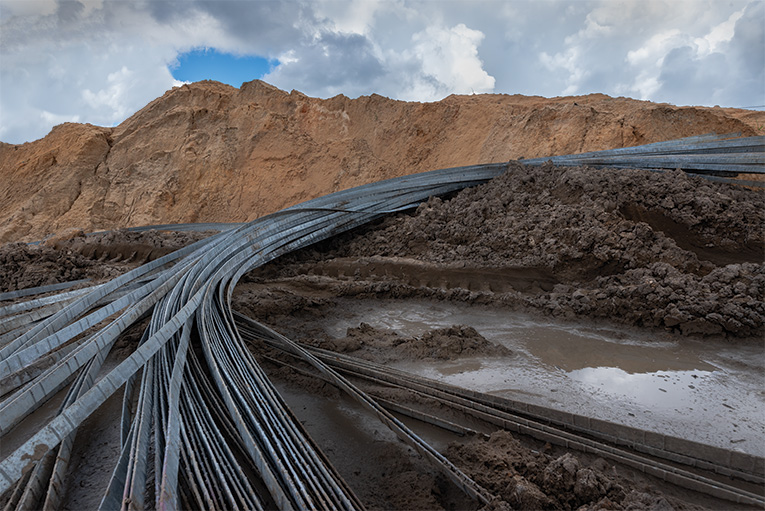 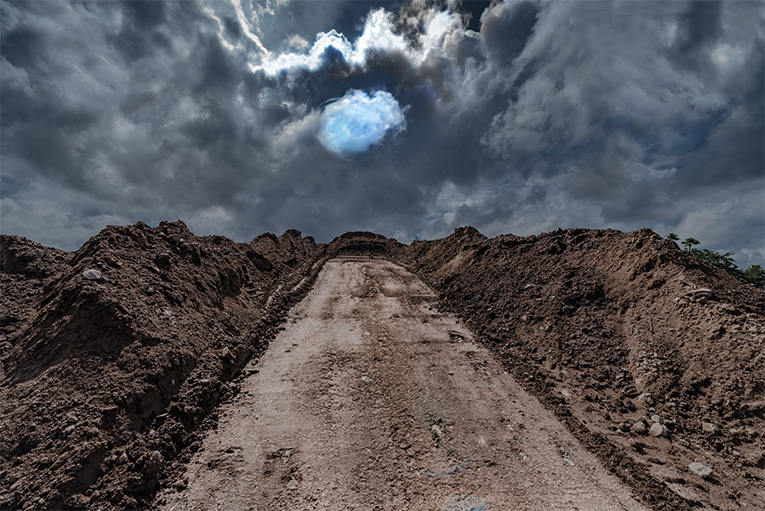 “There’s something about the clouds in Florida,” says Benson, who talks about them as if they are children trying to get his attention, working their way into the frame as he captures the businesslike efforts below—the signs, the walls, with their air of solidity and permanence. “More and more,” he says, “it’s about the clouds.” 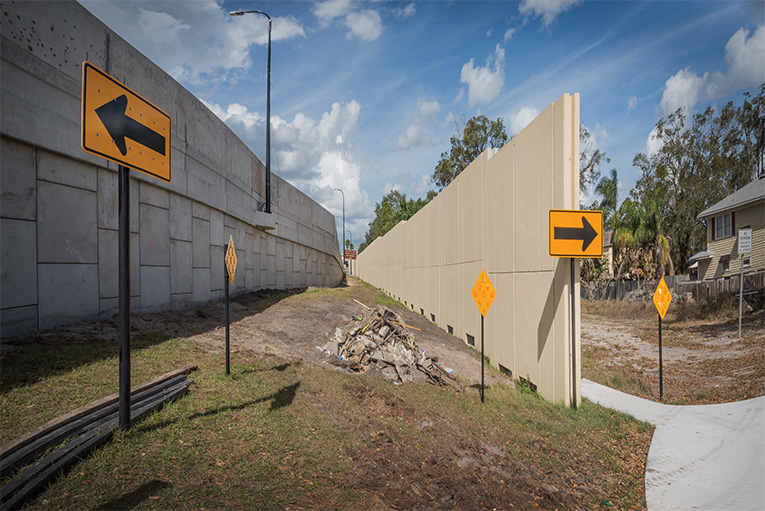 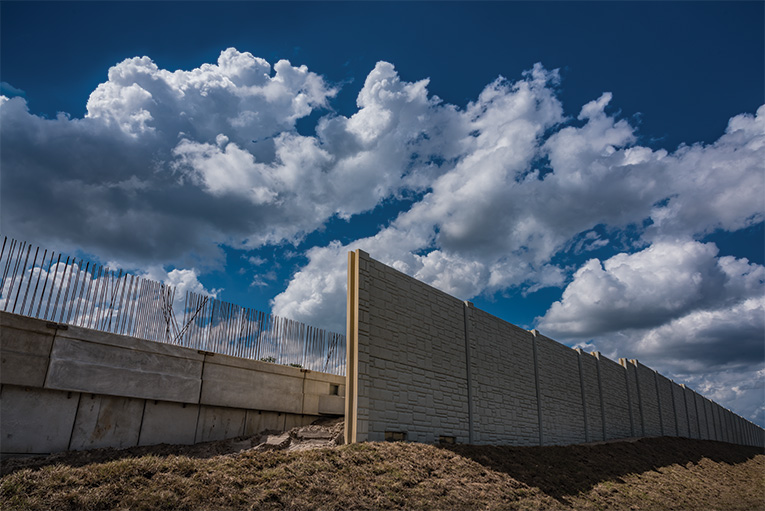 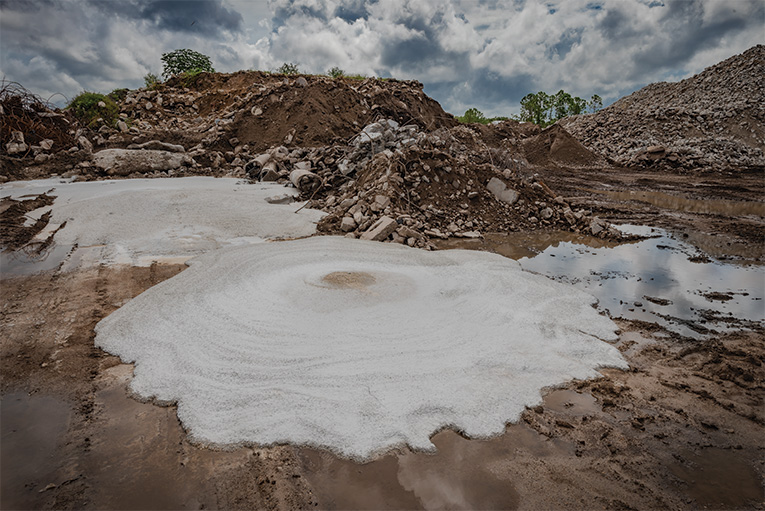 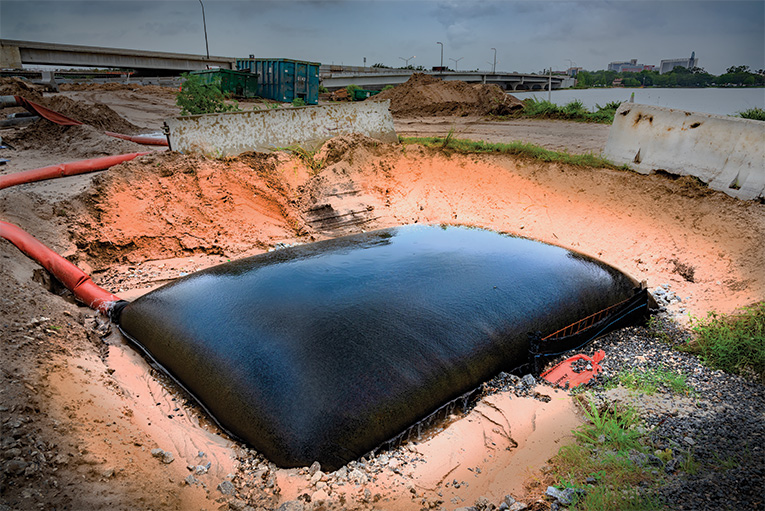 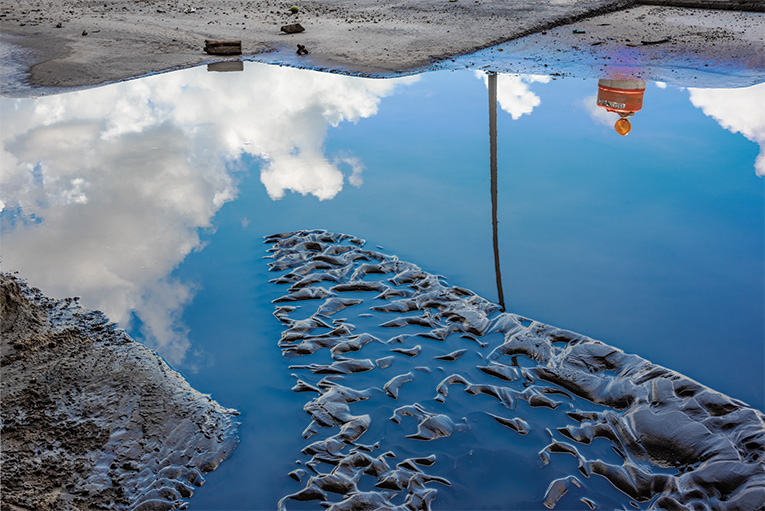 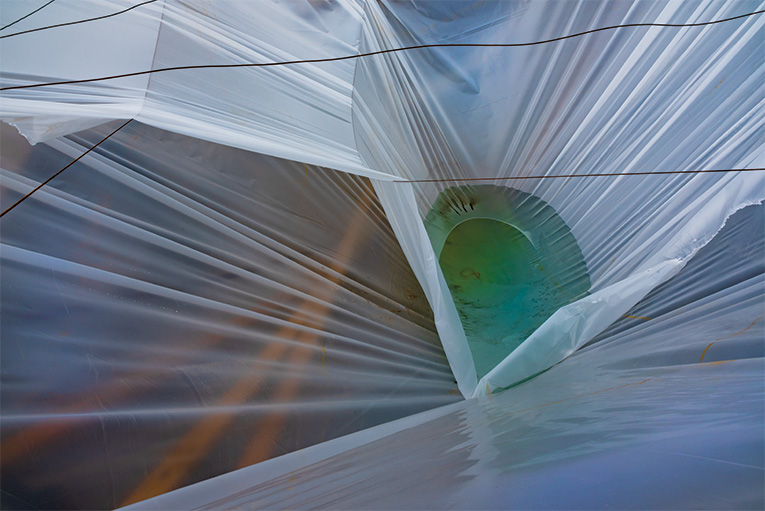 Benson says he often has the feeling he is encountering “unintended sculptures” — a sense of discovery that overtook him when he came upon stacks of a perforated, cast-concrete drainage system that will be incorporated into the new roadway. “Someone told me, when they saw this picture, that it gave them the sense of looking at a cathedral.” 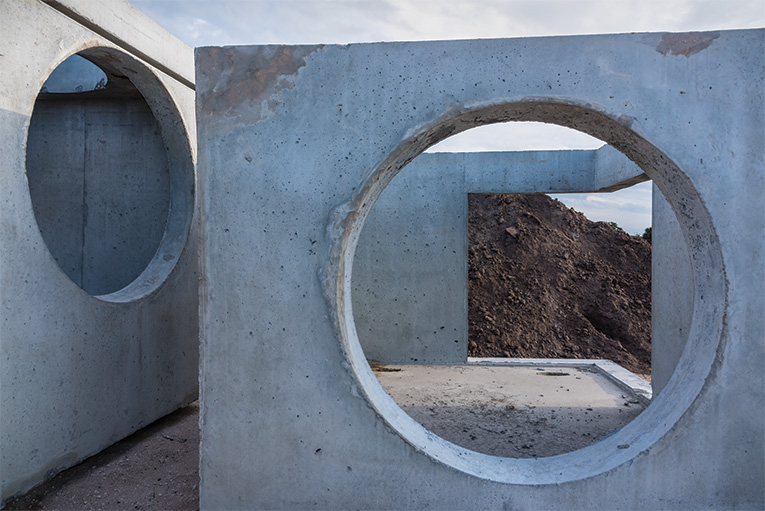 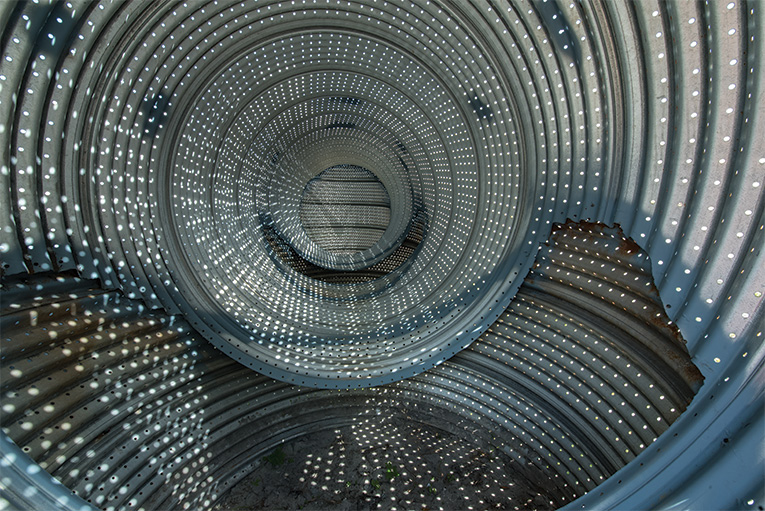 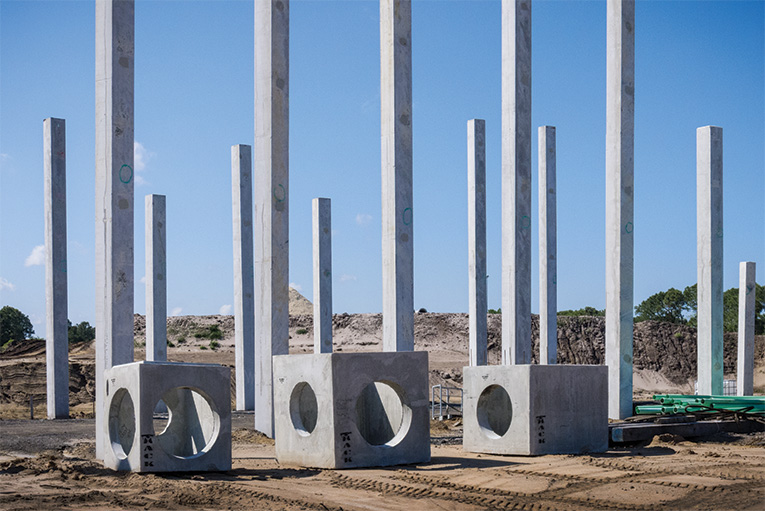 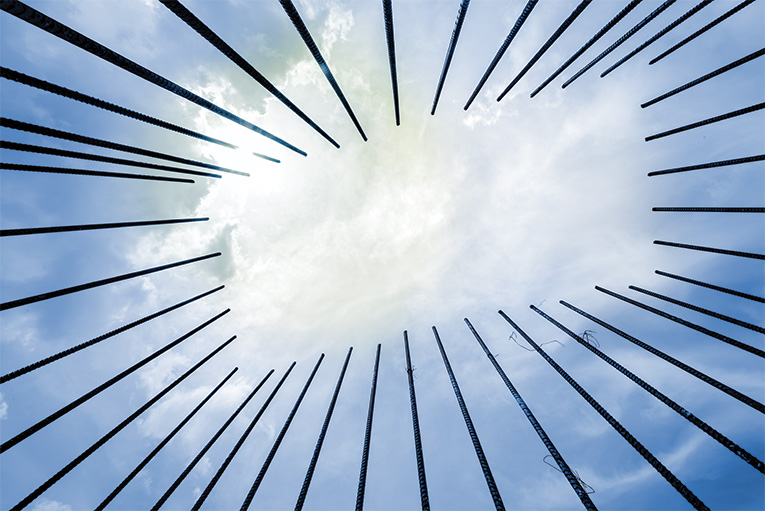 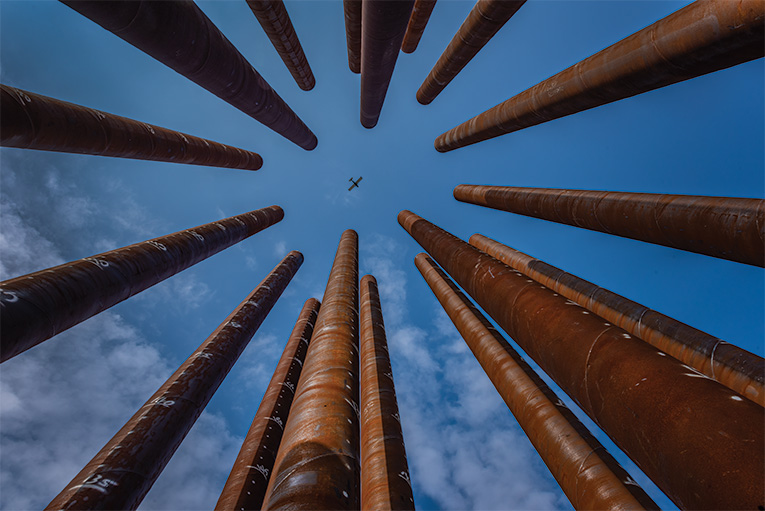 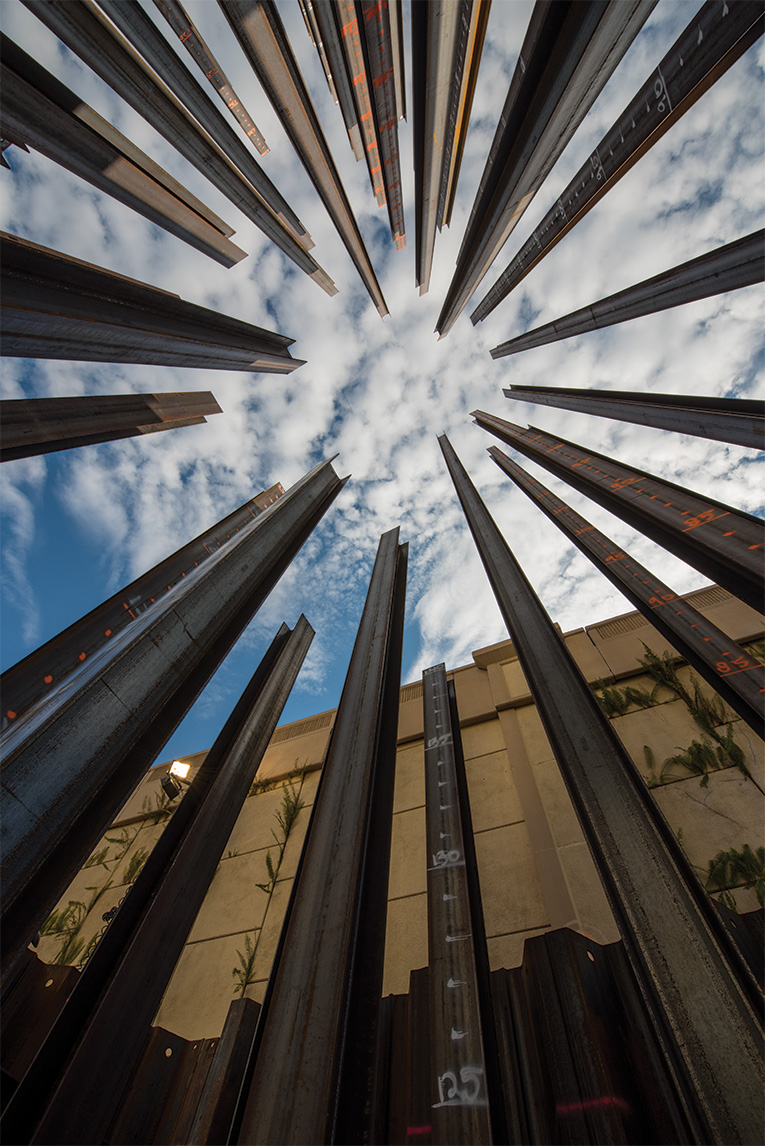