Model railroad hobbyists create miniature worlds they control at the flip of a switch. 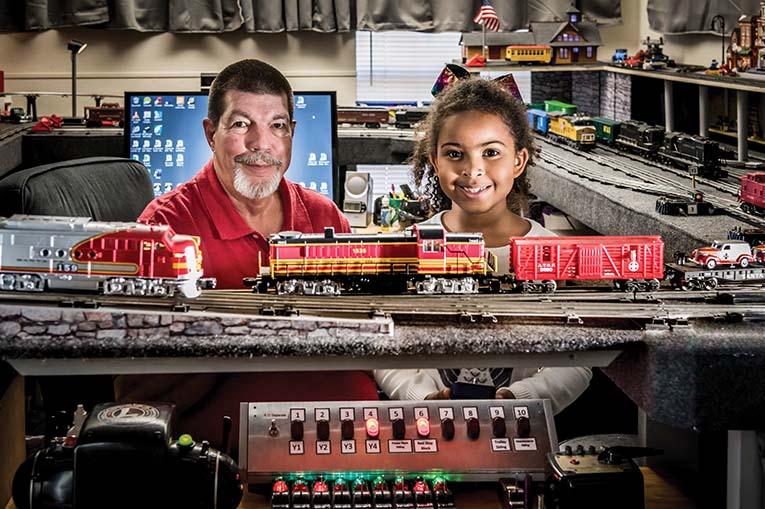 Eight-year-old Aliya Copeland pays careful attention as her grandfather, Greg Barker, coaches her on how to check signals before launching her engine along the model railroad track that runs a loop around his Winter Springs office.

When Barker started building the new layout (the term for the track and scenery), “I started helping. He had an old trolley. I could control it with this transformer over here,” Aliya points proudly. “I like running trains. I like fixing problems. It helps me learn about things” such as “energy and how it works,” she says.

Her grandfather’s father got Barker started 56 years ago as a teaching tool. “He asked a friend, ‘How do I help my son learn about electricity without hurting him?’ And he said, ‘Buy him a Lionel train because they reduce the voltage. If he gets it wrong, it will stop. And if he touches anything, it will tingle,’ ” Barker recalls.

Like other model railroad hobbyists, Barker can’t put a number on his investment or the number of engines and cars he owns. And like other hobbyists, he keeps many in storage, rotating what goes on display and occasionally springing for new pieces. “I’m a discriminating shopper,” he says. Prices can vary from $400 for a ready-to-run set to what Barker describes as “engines that do everything in the world” priced at about $1,500 each.

Harvey Kelber of DeBary, a retired IT manager, uses one of his four bedrooms to display his trains. But he lends some of his collection to a massive layout designed and maintained by members of Central Florida Railroad Modelers, with headquarters in an Orlando warehouse. Members pay dues to maintain and expand the layout, and they share pieces from their collections. Each month, members run their trains on a schedule, like their real-world counterparts.

Kelber is in charge of the meticulous scenery throughout the club’s layout, a reflection of 1960 West Virginia. When he would drive from his native Ohio along Interstate 77 into West Virginia, “I would look at the mountains. That’s what I try to create. I love doing the scenery probably more than I love running a train.”

Club president Jeff Strigaro, a mechanical engineer, adds: “Almost every town except one is a real place in West Virginia.”

Businesses along the layout are lighted and furnished to an almost unnerving degree of realism. Kids play on the swings in a schoolyard. Vintage cars are parked at a dealership. Women in period clothing window shop for dresses. “That’s what we’re known for—the level of our detail,” Strigaro says. He points to a shack on the layout and laughs, “That’s my house, because I’m here so often my wife kicked me out.”

Strigaro was fascinated with model railroads at a young age, even building a layout in his family’s attic. “My uncle was a yardmaster for Long Island Rail Road. From early on, he took us on his days off to ride on the trains.”

All the modelers attest to the hobby’s enduring, addictive and expensive nature. “When a UPS truck comes down the street, my wife says, ‘What did you order now?’ ” laughs Kelber.

This article appears in the April 2021 issue of Orlando Magazine.
Categories: Community
Tags: hobbyist, model trains
Want to read the whole issue? Download and read this issue and others on Magzter.