The Orlando physician relates his story of painful childhood loss and recovery, while our writer shares her memory of the tragic event. 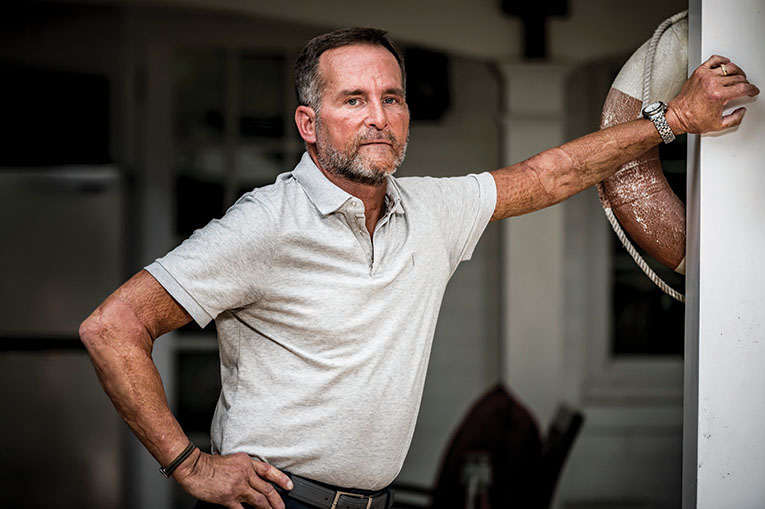 The summer of 1976 was a more welcome respite than most to me and my fellow students at Fairview High School, nestled in the quiet westside Cleveland suburb of Fairview Park. The previous year had brought three deaths to our 1,000-student school, including the sudden passing by heart failure of my longtime paperboy and fellow band member as we marched off the football field. Students and teachers had been more than ready to leave the previous year behind and start fresh.

I was especially ready. Though quirky and bookish, I had made it onto the junior varsity cheerleading squad my sophomore year. Our squad members would meet by the bleachers on summer afternoons to rehearse cheers for the upcoming football season.

One sunny afternoon, a 6-year-old boy interrupted our practice with questions and taunts typical for a kid his age. A big sister to a baby brother, I was unfazed. One of my fellow squad members did not share my sentiment. “Go home, Toby!” she yelled. He did.

“That’s Toby McDonough,” she replied. I didn’t know that would be my first and only time seeing him.

The McDonough family was well known and respected throughout our small community. Toby’s brother, Tim, had sat behind me in homeroom. Their older brother, Mark, was one of the first people I had noticed when I moved to Fairview in fifth grade. A year ahead, he had piqued my interest, seeming enigmatic and more self-assured than other sixth-graders. But by high school, our paths had become divergent: Despite being a cheerleader now, I was still a geek; Mark was more of what Fairview kids called a beat, the kind who enjoyed parties more than school.

And then, even before our new school year began, tragedy struck our community once again. This time it would find the McDonough family. It was Aug. 3, just a few days after I had met Toby. An electrical fire during the night had overtaken the McDonoughs’ home, just four houses from our school. Little Toby was dead. Their, mother, Dorothy, was on life support. In his attempt to save his family, Mark had been burned over at least 60 percent of his body.

Tim and younger brother Dan escaped. Packy, several years younger, broke an arm as he climbed out his bedroom window. Thornton McDonough, their father, was in San Francisco on business, having left six smoke detectors uninstalled on the kitchen counter.

“I wasn’t thinking anything about my physical self whatsoever,’’ recalls Mark McDonough, who went on to become a plastic surgeon in Orlando. “I ran right through the fire to get to the back of the house’’ trying to save his mother and little brother. In the ambulance, “I kept asking them if they got my mom and my brother out, and they weren’t answering. My biggest concern was whether or not they survived.” 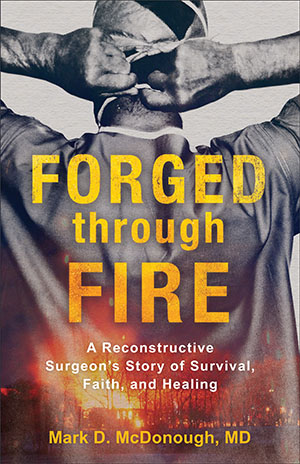 McDonough shares his story in Forged Through Fire: A Reconstructive Surgeon’s Story of Survival, Faith, and Healing, published in 2019 by Revell Books. Though I had known his experiences had led him to help others like him, there was more to the story than I had ever been aware.

This was not McDonough’s first fight for life. As a 5-year-old, he battled Guillain-Barré syndrome, a virus that attacks the myelin on peripheral nerves, leaving McDonough too weak to move or even breathe on his own.

“Little did I know it was going to be such a long course of rehabilitation and recovery. It was months before I was functional again—before I regained my strength, balance and coordination,” he recounts. The experience somewhat prepared him for what he would endure as a 17-year-old; in many ways, it made it more terrifying as he recalled the pain, isolation and lack of compassion he had suffered at the hands of medical professionals as a little boy.

In the fire’s aftermath, McDonough continued to pray for death as he went through excruciating dressing changes and tests that required moving his searing body. But despite his pleas, God didn’t take him. Then, on Aug. 13, 10 days after the fire, McDonough at least temporarily got his wish: Anesthesia left him paralyzed but fully aware during a debridement surgery to remove dead tissue. Terrified and bleeding to death, McDonough says he experienced euphoria in the presence of God with his mother, his brother and his grandfather. His heart had stopped.

But somehow he knew this: “I could not remain where I was. Nor would I be passing over the threshold to what I perceived to be the preferred ultimate state of existence. It was not my time,” he writes. He revived, surviving the first of 30 surgeries he would undergo over many years.

That day became a second birthday of sorts, as McDonough would later tell Joan, the woman he would eventually marry, on their first date. “He says, ‘On Friday the 13th, my dad always wishes me happy birthday because I died and came back [that day],’”  Mark’s wife of 29 years recalls. “I said, ‘Which month?’ He said, ‘August.’ I said, ‘Aug. 13? That’s my birthday!’”

Though that summer day marked a new beginning in his life, McDonough’s struggles continued for years to come. His father plunged further into alcoholism after the fire, with McDonough himself recognizing beer’s numbing effects as he recovered from his injuries. As a physical therapist working in Orlando before embarking on his plastic surgery career, McDonough went through treatment for alcoholism in 1986. His father had gotten clean six years earlier.

Now sober, McDonough prayed about going to medical school. “When I started to heal myself not only physically but emotionally and mentally from alcoholism, I started to appreciate that kind of discipline with a new kind of maturity; maybe I could handle the challenge.”

His experiences were “the inspiration for going into the healthcare field. The best and most rewarding parts of it are when I can share my experience with patients who can identify in one way or another with the idea of a life-changing event like that.” But he adds, “I never say, ‘I know what you’re going through,’ or ‘I’ve been there.’ But I can identify with what you feel or what you’re going through because of what I went through.”

An internship initially brought McDonough to Orlando, where he met his wife and would establish his roots. He launched his plastic surgery practice, McDonough Plastic Surgery and Rehabilitation Consultants, in Orlando in 2003. Meanwhile, I had come to Orlando in 1985 to work as an editor at the Orlando Sentinel. It wasn’t until decades later, while reading a magazine article about McDonough at a doctor’s office, that I would learn about the career path that also led him here. However, I didn’t connect with him or his family until 2019, when I accidentally—or providentially—began talking with his wife in a mall checkout line and saw her pull a copy of his book from her purse as she retrieved her wallet to pay for her purchase, a sweater identical to the one I held.

“One of my classmates wrote that book,” I commented.

“My husband wrote that book,” she responded. We since have learned of a multitude of connections including friends and even a mutual editor.

Before arriving in Orlando, McDonough and Joan had welcomed three sons—Connor, Riley and Toby, named for the little boy I met and who had died so many years ago. The family enjoys an active lifestyle, and the boys inherited their father’s love for music, eventually forming the pop band Before You Exit. But the family continued to experience heartache. 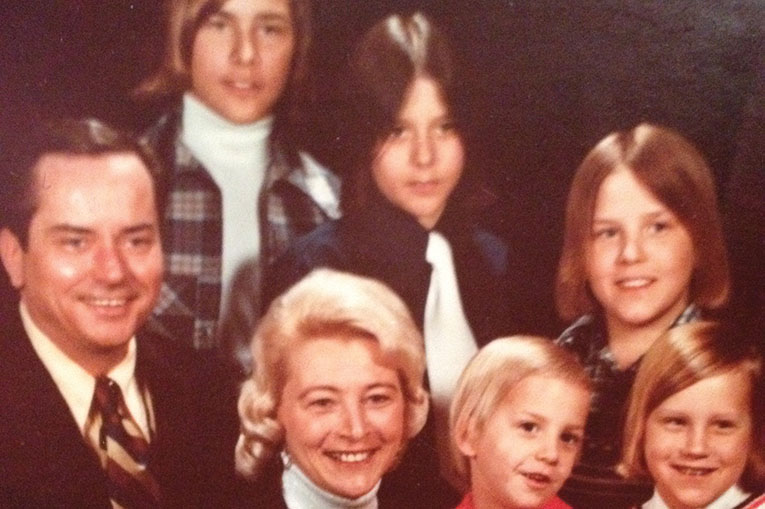 Mark’s brother Packy took his life in 1987. Thornton McDonough died of prostate cancer in 2002. My classmate Tim, who had battled and overcome his own addiction to alcohol, died in 2013 from complications of a stroke. Only Mark and Dan, who has recently battled lung cancer, remain.

Mark McDonough’s own health challenges didn’t end with his reconstructive surgeries. He suffered a paralyzing stroke on the anniversary of his mother’s death, at just 35 years old. “Physically I really began to appreciate the emotional strain. That’s not a coincidence I had a stroke on that day. Who knows what other effects the fire had on me?” Years later, congestive heart failure led to open-heart surgery that brought an end to his work as a surgeon. Today, “I do volunteer work and see a few private clinical patients,” he says.

When McDonough decided to share his story of faith in the face of adversity, the process initially was cathartic, but it caused him to revisit the sources of his deepest pain. “I felt so raw for about a month after the book came out,” he says. “In truth, I think it traumatized him,” Joan McDonough adds.

Just when he thought his story was written, he would add another painful chapter: the story of singer Christina Grimmie’s murder by a gunman on June 10, 2016, after a concert she performed with the McDonough boys at The Plaza Live in Orlando. Mark McDonough fought to save the life of their family friend. Her death haunts him still. “I’d have happily given my life to spare my sons the traumatic loss they endured,” he says.

Grimmie’s death marked a second time when McDonough questioned if he did enough to save the people he loved. “I will always wonder if there was something else I could have done or if my years of training could have saved her,” he laments.

Despite lingering physical and emotional pain and the monumental losses he has suffered, “God wants us to know we can do anything with His help. He will help us through anything, but He doesn’t just dump stuff on us so we can prove how strong we are. He does that so we can be sculpted and molded and forged into the being and character He’d like us to be. Sometimes I think that’s only possible through struggles. The biggest lessons I ever learned were some of the hardest and most painful.

“I want people to realize the joys way outweigh the pain, and it’s worth it,” he says. “I’ve had such a good life.”

This article appears in the August 2020 issue of Orlando Magazine.
Categories: Community, Home Page Features, News and Features
Tags: burn doctor, burn victim, Forged Through Fire
Want to read the whole issue? Download and read this issue and others on Magzter.