Explore this unique ecosystem in the Gulf of Mexico. 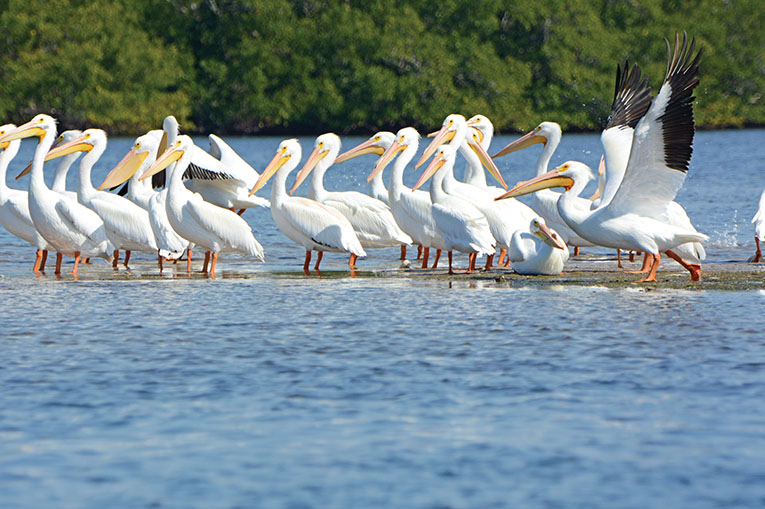 Often referred to as “the seashell capital of the world,” Sanibel Island is part of a plateau that extends for miles into the Gulf of Mexico and acts as a shelf upon which shells gather until winds, waves or storms wash them onto the barrier island’s beaches. Collecting seashells is so popular here that the term “Sanibel stoop” was coined to describe the pastime (bending to comb through heaps of bivalves and gastropods) that draws visitors to this Southwest Florida island.

Residents work hard at maintaining their paradise by nurturing a culture of conservation. Their aim is to protect and preserve natural resources and most importantly avoid overdevelopment, a fate of so many coastal communities. Towering resorts are nonexistent here. Instead, you’ll find properties dating back to the 1940s and ’50s that blend vintage style with modern comforts and technology. Gulf-front small motels and pink, green and yellow cottages are tucked behind thick tropical foliage. Don’t expect street lights after dark, you’ll have the starry night sky to guide you. If you’re looking for a lively nightlife scene, you’ve come to the wrong island.

The J.N. “Ding” Darling National Wildlife Refuge, one of the country’s largest undeveloped mangrove ecosystems, covers 5,200 acres of the island. It sits on the north side of Sanibel, facing the inky waters of Pine Island Sound. Tarpon Bay Explorers, the park’s concessionaire, runs tram tours on Wildlife Drive, the refuge’s eight-mile loop designed for motorists, bicyclists and hikers. The sanctuary is especially popular with birders who are often weighed down by binoculars and cameras with telescopic lenses. They stake out spots along the bayou hoping to photograph anything from a yellow-crowned night heron to a flock of white pelicans.

Keeping with conservation efforts, Sanibel is bicycle-friendly, and at Billy’s Bike Shop everything from cruisers to tandems is available. A well-planned asphalt bicycle path crisscrosses the island. Ride along the main thoroughfare Periwinkle Drive, stopping at ice cream shops and poking into fashion boutiques and souvenir stores. You can also reach the beaches on two wheels or pedal to the east end to visit the Sanibel Lighthouse, the island’s oldest standing structure, built in 1884. fortmyers-sanibel.com

More than a restaurant, Doc Ford’s is a destination for anyone familiar with author Randy Wayne White’s novels set on Sanibel. His protagonist, Doc Ford, is a biologist and ex-government agent who takes readers deep into island life on fictitious adventures. An adjacent boutique carries White’s books from his first, Sanibel Flats, to his latest, Salt River, as well as his hot sauces and logo merchandise.

A leading authority on Florida’s shells, this museum features rare junonias, fig snails, pen shells and many others. Some of the world’s largest shells are on display here: the goliath conch, lightning whelk, Atlantic trumpet triton and horse conch. To learn even more about seashells, book a morning beach walk with a museum guide.

This article appears in the April 2021 issue of Orlando Magazine.
Categories: News and Features, Travel
Tags: Florida, Sanibel Island, Travel
Want to read the whole issue? Download and read this issue and others on Magzter.