This state park is a must-see! 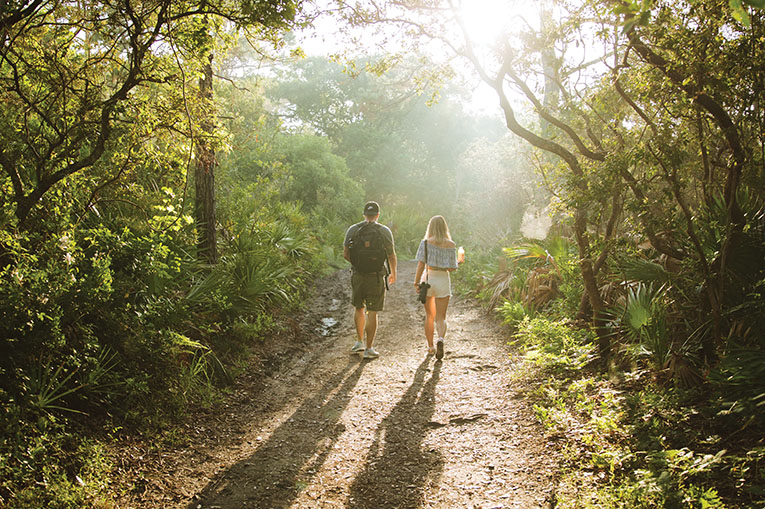 There is a small island off Northeast Florida’s Atlantic coast with no throngs of tourists, no traffic jams, and no buildings, except for a lone ranger’s station. Instead, what you’ll find is a rare slice of unspoiled Florida: a glowing alabaster beach, shapely sand dunes, rolling salty surf and peaceful tidal creeks. It’s called Little Talbot Island, and every inch of it is a well-preserved state park.

A stay on this undeveloped barrier island may not be for everyone, since the accommodations here would be your own tent or RV. But spending the day on this slice of paradise is another story, as Amelia Island with its diverse lodging options is just a few miles up the coast.

Lying on Little Talbot’s warm white beach, staring at an azure sky and mesmerizing waves, is a heavenly way to unwind. As tempting as it is to while away the entire day, there’s exploring to do, starting with the Dune Ridge Trail. On the island’s north end, the circular path’s first two miles travel through a mature maritime forest and across ancient dune ridges. Arching live oak branches, laden with Spanish moss and dwarfed by loblolly pines, shade the way. Hikers pass palmetto, cedar, holly and spicy bay trees. Gradually the landscape changes from thick woods to dunes covered with the long shoots of flowering railroad vines, whose purpose is to prevent beach erosion. On the trail’s last two miles of beach, driftwood skeletons appear on the shore and wandering gopher tortoises camouflage in the sands.

The west side of the island, with its tranquil salt marshes, is bliss for kayakers. Narrow Myrtle Creek, tucked between Little Talbot and Long Island, offers paddlers a peaceful stretch of estuarine grasslands—and light tackle anglers a chance to catch redfish, flounder, trout and black drum. More adventurous kayakers can take the wider Simpson Creek north past Big Talbot Island and the bluffs of Half Moon. Or they can head south to Fort George Island, home to the historic Ribault Clubhouse and the Kingsley Plantation, circa 1700s.

Another great way to enjoy the island is to bicycle its main asphalt road, Dune Ridge Trail or hard-pack sandy beach. Birders can spy shorebirds along the Atlantic coast, waders in the marsh, and songbirds in the forest. visitjacksonville.com

There are two historic sites worth visiting on this neighboring island. The Ribault Club, a country club constructed in 1928 on top of a 3,000-year-old Native American shell midden, now serves as the Fort George Island Cultural State Park visitors center. At the Kingsley Plantation, which produced sea island cotton, you can tour the main house built in 1797 and tabby slave cabins.

Rent a kayak or paddleboard from Kayak Amelia, Little Talbot’s official outfitter on the island, or join one of their eco-tours. The Salt Marsh Tour explores a series of tributaries that wind through wetlands; spot wading birds and observe the ecosystem close up. The Bar Hopping tour stops on sandbars exposed as the tide goes out, revealing indigenous critters.

This article appears in the April 2021 issue of Orlando Magazine.
Categories: News and Features, Travel
Tags: Florida, Little Talbot Island, Travel
Want to read the whole issue? Download and read this issue and others on Magzter.