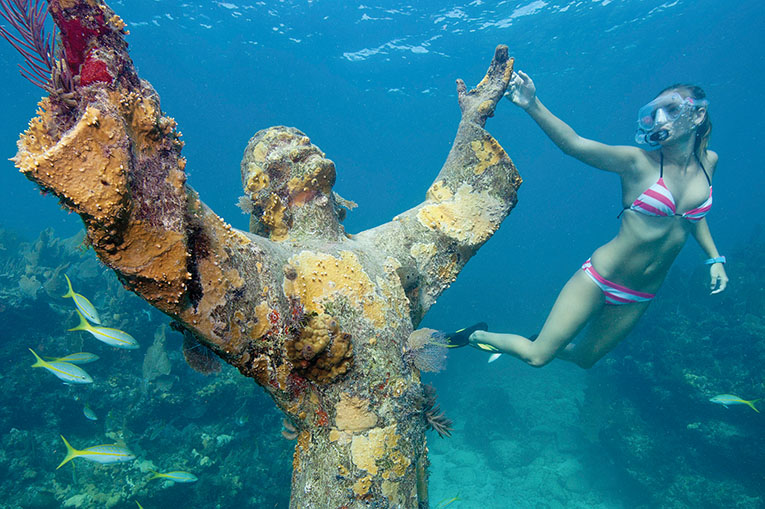 If you dream of heading to the Florida Keys for diving, snorkeling and other water delights, you’ll find what you’re looking for at the northernmost island: Key Largo. The sparklingly clear blue-green waters that surround the island chain make it easy to explore the living coral barrier reef lying off Key Largo’s eastern shore. The only such reef in the continental United States, it’s part of John Pennekamp Coral Reef State Park, America’s first undersea park.

Snorkel boats depart daily for the reef. Jump into the Atlantic waters, and feast your eyes on huge brain corals, flowing sea fans and sculpted elk horn corals. Schooling fish like feisty sergeant majors, identified by black bars reminiscent of military insignia on their sides, are plentiful. Rainbow-colored parrotfish and sleek silver barracudas populate the waters, and spiny lobsters poke out from under ledges. Those who don’t want to get wet can opt for a glass-bottom boat tour.

Serious aquatic adventurers can go deeper to not only observe marine life but explore shipwrecks, too. Dive boat charters depart from the state park, as well as from marinas scattered across Key Largo. Their destination is the Florida Keys Shipwreck Trail, a treasure trove of nine sunken vessels dating back to the 18th century. A regular stop near Key Largo is the Benwood, which sank in a collision during World War II. Divers descend 40 feet and swim along its fractured hull where purple sea urchins cling to its sides and goliath groupers lurk in its cracks and crevices.

On the Florida Bay side of the island, parasailing 475 feet in the air provides a bird’s-eye view of green mangrove islands that dot Everglades National Park to the west, the Atlantic Ocean to the east, and the long string of skinny islands.

A day on the water works up anyone’s appetite. So stop at the landmark Fish House Restaurant, a go-to spot for fresh seafood from local commercial fishermen. Strung across its ceilings are fishnets and strands of colored lights shaped like conch shells, flip-flops and tiki gods. An extensive menu makes it hard to choose, but you can’t go wrong with grouper, mahi mahi and yellowtail snapper fresh off the boat. fla-keys.com

Docked at Marina Del Mar, a restored African Queen, the 30-foot riverboat that carried Humphrey Bogart and Katharine Hepburn in the eponymous 1951 film, awaits nostalgic cinephiles who want to relive the Golden Age of Hollywood. The steamboat plies the waters of Key Largo’s canals en route to the Atlantic Ocean for a 90-minute sightseeing cruise.

At Mrs. Mac’s Kitchen, a neon sign hangs outside advertising their “World Famous Key Lime Pie.” The recipe, in use since 1976, was handed down from the original owner’s mother, who is the namesake of the restaurant. Don’t miss sampling the sweet, yet tart, pies that are baked the traditional way, with a graham cracker crust and fresh whipped cream topping.

This article appears in the April 2021 issue of Orlando Magazine.
Categories: News and Features, Travel
Tags: Florida, Key Largo, Travel
Want to read the whole issue? Download and read this issue and others on Magzter.