High-quality cuisine on the high seas helps make for a memorable weekend jaunt on the Disney Dream.

The first Disney cruise I took was in 1972, a no-frills excursion that featured no stateroom, no food, 15 to 20 passengers and a wisecracking captain. And lasted all of 10 minutes.

Today, Disney has substantially upgraded the waterborne experience from the Jungle Cruise that I enjoyed at Walt Disney World six months after it opened (and, yes, that beloved ride still exists). Its cruise line now has three ships sailing out of Port Canaveral on multiday excursions. Not sure which to take? Start with the three-day Bahamas adventure on the Disney Dream. 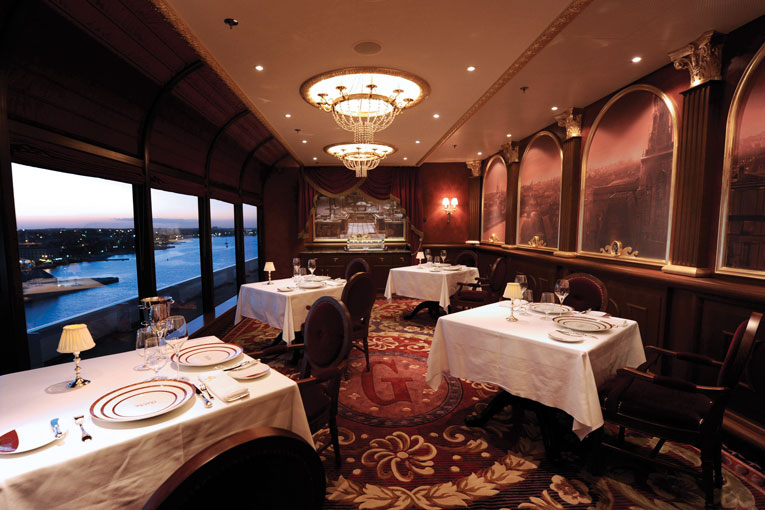 A getaway on this enormous vessel—it’s 40 percent bigger than sister ships Magic and Wonder—can provide as much fun as spending time at the theme parks. No oppressive heat or tired, whiny kids here. A Dream cruise includes clubs for small fry and teenagers, pools, a one-of-a-kind water slide, character meet-and-greets, and superb shows that would be right at home on a Broadway stage. And there’s lots geared toward Mom and Dad—or couples without kids—including a champagne bar, a sports bar, a dangle-your-feet-in-the-pool bar, and an adults-only spa.

And food, glorious food. Leave Lady and the Tramp to their spaghetti and meatballs. Disney takes its high-seas cuisine seriously, and you should make it a point to splurge during your sojourn at one of the Dream’s two fine-dining restaurants for adults—the French-inspired Remy or the Italian-themed Palo. At Remy, the masterpieces of chefs Arnaud Lallement and Scott Hunnel (yes, that Scott Hunnel from Disney World’s Five-Diamond Victoria & Albert’s) are on display in the form of eight to nine courses, ranging from smoked buffalo with jicama to scallops with black olive and fennel. At Palo, you start off with cold and hot antipasti selections, then move on to dishes that include pappardelle with lobster, and pan-seared turbot with porcini, pancetta, and fennel with walnut butter. 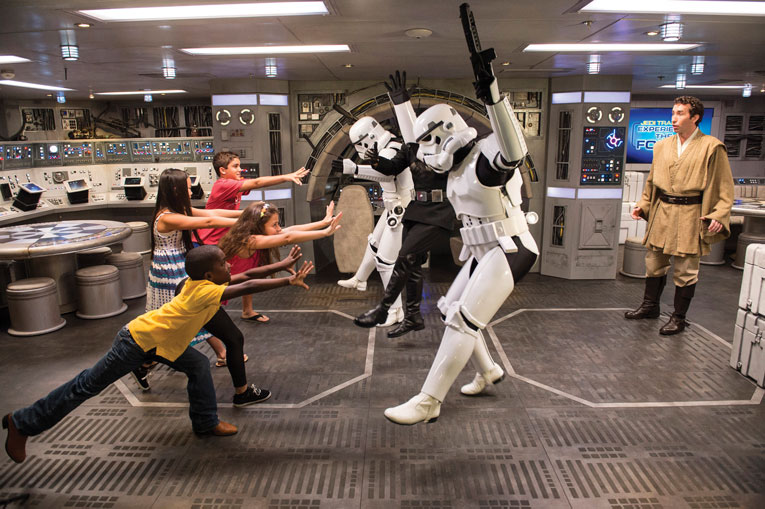 As if those indulgences weren’t decadent enough, there are two intimate dining room tours that give you a taste of the culinary magic. Petites Assiettes de Remy, or Small Plates of Remy, is offered on the first day of the cruise with samplings of the restaurant’s dishes, paired with wines. Then there’s Pompidou’s Patisseries Dessert Experience, with tastings of six desserts, such as French praline topped with milk chocolate mousse and dark chocolate glaze. And for more adventurous wallets: a selection of truffles and caviar at Remy.

The more informal sit-down dining options—Animator’s Palate, Royal Palace and Enchanted Garden—also are winners. At Animator’s Palate, kids are delighted by the characters from the Finding Nemo movie that “swim’’ throughout the restaurant via video screens, interacting with guests. There’s also Flo’s Cafe’s, where you can grab pizza, burgers, hot dogs, and all the soft-serve ice cream your heart desires.

Day 2 of your cruise includes a stop at Nassau. But if you’ve already been there, done that port of call, don’t follow the throng. Stay on board and take advantage of the less-crowded pools and bars, and the shorter lines at the exhilarating AquaDuck, a 765-foot long combination water slide/tube/coaster that rises 45 feet above the deck.

On Day 3, though, you’ll definitely want to touch dry land. That’s when the Dream stops at Castaway Cay, the 1,000-acre Disney-owned island where your family can enjoy a full day of beach relaxation, walking trails, all the barbecue you can eat, bicycling and snorkeling, among other things. (Trivia break: 130 Disney employees actually live on the island at any given time.)  Want your own private pad? Pony up an extra $500 for a cabana that will hold 10 to 16 people looking for relaxation or revelry.

Back on board, there’s clubbing aplenty for all ages. Kids can learn to be a pirate, join Professor Make-O-Mess exploring the world of sloppy science, or play in Andy’s room from the movie Toy Story. The latest fun activity: A Star Wars interactive area where youngsters can climb into the cockpit of the Millennium Falcon ship and fly through the galaxy. Meanwhile, Edge (ages 11-14) and Vibe (ages 14-17) offer everything from high-tech games to dance parties. And adults have their choice of eight clubs in a section called The District. A favorite: Pink, the champagne bar that offers the icy pop cocktail (a glass of Moet & Chandon with a popsicle dunked therein). Grownups also have separate areas on three decks with their own bars, restaurants and pools.

The Port Canaveral cruise terminal is just an hour’s drive east of Orlando via the Beach Line Expressway. There’s a parking garage just steps away.

Rooms with a View
Disney offers a variety of cruises from the port, with the three-day Dream excursion leaving Friday afternoon and returning Monday morning. Rates start at about $600 per adult for an interior room, with ocean views and verandahs commanding higher rates. Check out the pricing and more at disneycruise.disney.go.com. Even the interior rooms boast a view of sorts through a “magic porthole,’’ which features a real-time look outside the ship from four video cameras that correspond to each stateroom’s location.

In Character
Character appearances? Need you ask? There are as many as 18 a day at four locations. Sometimes Mickey dresses as, well, Mickey, sometimes as a pirate. Watch for Captain Hook and Peter Pan, as well as Anna and Elsa, the ever-popular sisters from Frozen.

Memories You Can Make
Relaxing in heated mosaic tile lounge chairs at Rainforest Spa. Unwinding in a hot tub on the deck. Sitting on your private verandah with a cocktail and gazing across the never-ending sea. Being dazzled by the quality of the character-filled stage shows. Ordering room service at no extra charge. Achieving coolness with the kids by taking the AquaDuck challenge.