Tired of the same old seasonal side dishes? Try these new flavors to brighten your holiday feasts.

Ah, tradition. It’s the shiny, gossamer web that holds holidays together, connecting people and places and memories from one year to the next.

Food often serves as the iconic centerpiece of Thanksgiving-through-New Year traditions. And far be it from us to suggest that anyone abandon Nana’s signature cornbread stuffing, Uncle Charlie’s green bean casserole or Mom’s hand-grated latkes. We know it “just wouldn’t be (fill-in-the-blank)” without fresh pumpkin pie, six different kinds of cookies, and yes, even canned, jellied cranberry sauce, complete with ridges.

But maybe, just maybe, there’s room for a bit of surprise this year. Keep the turkey, the prime rib or the brisket centerpiece, and certainly keep your fave side dishes. Then, add something new to the rotation. Just for fun. Make it a one-time frivolity, or start a new tradition of trying out a different holiday dish each year.

To get you started, here are a few appealing options. Nothing to bump Nana’s stuffing off the table, but definitely conversation starters. 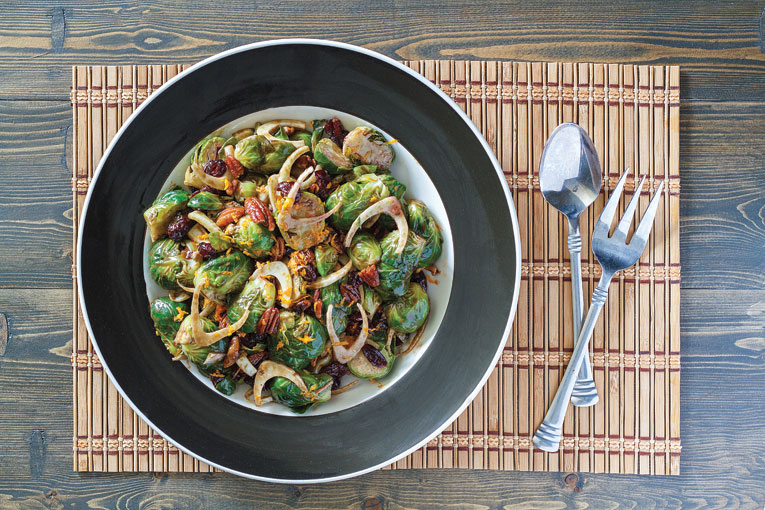 Bring a large pot of salted water to a boil. Add the Brussels sprouts and blanch, cooking only until the outer leaves turn bright green and halves can be pierced with a fork, about 3 minutes. Drain sprouts, then plunge into cold water. Drain well, gently pat dry with paper towels, and place in a large bowl.

In a skillet over medium-high heat, melt 1 Tbsp. butter and add half the pecans. Cook, turning pecans frequently, just until pecans are fragrant and golden brown. Remove pecans to a plate lined with paper towels and repeat the toasting process with remaining butter and pecans.

Add cranberries, fennel and pecans to the Brussels sprouts. Whisk together oil and vinegar. Drizzle one-third of the dressing over the sprouts mixture and toss to coat. Add more dressing to taste.

Season with salt and pepper and garnish with orange zest.

Can be served chilled or at room temperature. Makes 12 servings.

NOTE: Raw fennel has a crisp texture and a mild licorice flavor. If you prefer, celery or jicama slices can be substituted. 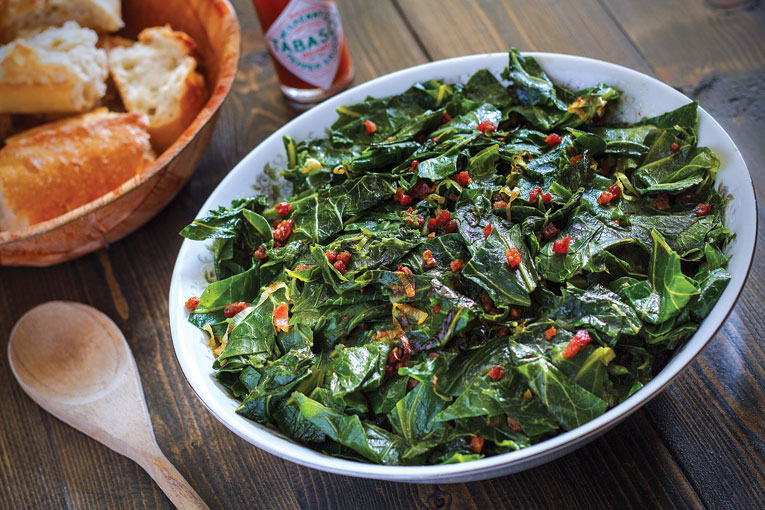 Wash and trim collard greens, removing spines and cutting leaves into one-inch pieces. Add leaves to the boiling water and cook 10 minutes. Drain collards in a strainer and, using the back of a cooking spoon, press out as much liquid as possible.

In a large skillet or flat-bottomed wok, heat olive oil and butter over high heat. Add pancetta and cook 2 to 3 minutes or until the cubes of pancetta begin to brown. Add leeks and continue to cook, stirring frequently, for another 2 minutes. Add collards to the skillet and toss until ingredients are well mixed and collards are hot. Season with salt and pepper to taste and serve with Tabasco or pepper vinegar. Makes 12 servings.

NOTE: This is a great dish to serve alongside cornbread stuffing and black-eyed peas. The amount of collards specified refers to greens sold by the bunch, untrimmed. If you buy ready-to-use collards in a bag, figure two to three bags for this recipe. Other types of greens—as well as rapini—can be substituted for collards in this recipe. However, most other greens will blanch in just a few minutes, rather than 10 minutes for collards. 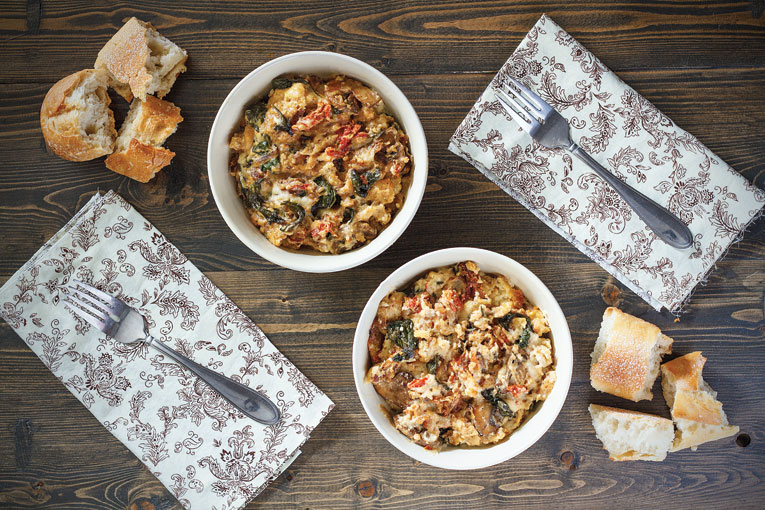 Place three cups of bread cubes in a large bowl. Pour milk over the bread and press top cubes into the milk. Let stand. Using one Tbsp. of butter, generously coat the inside of an oblong glass baking dish or casserole. Distribute remaining bread cubes evenly over the baking dish.

In a large, deep skillet, heat the remaining 2 Tbsps. of butter and the olive oil over high heat. Add the onion slices and cook, stirring, until onions begin to wilt. Reduce heat to medium and cook, stirring occasionally, for about 10 minutes or until onions begin to caramelize. Add mushrooms and return heat to high. Sauté for three minutes. Add the spinach and cook just until leaves wilt.

Carefully pour the contents of the skillet, including liquid, over the bread cubes in the baking dish. Use a spoon to distribute onions, mushrooms and spinach evenly over the dish. Sprinkle sundried tomatoes over the vegetables and bread.

Add cumin, salt, pepper and Italian seasoning to the bread and milk in the bowl. With an electric hand mixer, beat the bread and milk together to form a thick liquid. Pour the liquid over the bread and vegetables in the baking dish. Bake at 350 degrees for 40 minutes or until top is lightly browned and a knife inserted in the center comes out clean. Let stand 10-15 minutes before serving. Makes 12 servings.

NOTE: This bread pudding makes a great stuffing alternative, particularly for cooks who traditionally serve two different stuffings at Thanksgiving. But it’s also a great side for prime rib or pot roast. If your bread is very soft, leave the slices exposed to the air for an hour or so before preparing the dish. 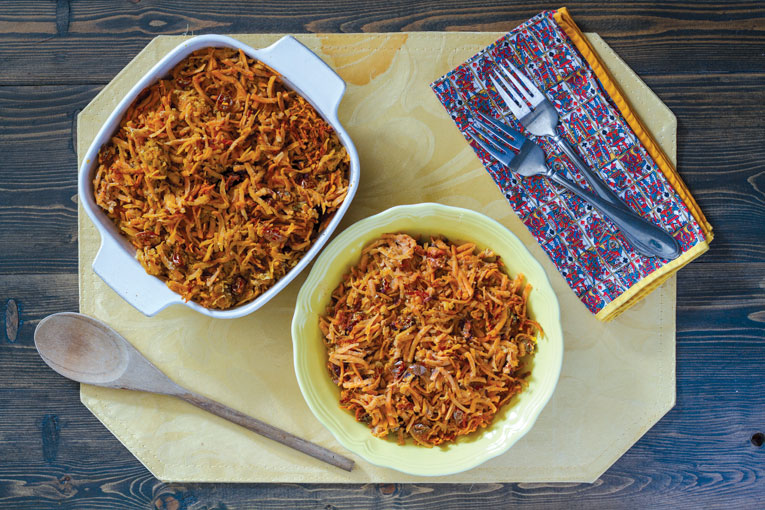 Peel sweet potatoes and cut into large chunks. Using a food processor and working in batches, grate the potatoes. In a large bowl, combine sweet potato shreds, sultanas and cinnamon. In a separate bowl, whisk together eggs and orange juice. Whisk in a pinch of salt.

Pour kugel mixture into a large, well-greased baking dish. Dot the top of the kugel with butter or margarine. Bake at 350 degrees for one hour, or until the kugel is nicely browned on top and tender in the middle. Makes 12 servings.

NOTE: This dish makes a nice alternative to sweet potatoes covered in marshmallows at the Thanksgiving table, and it’s also a great offering for a Hanukkah or New Year’s Day brunch. 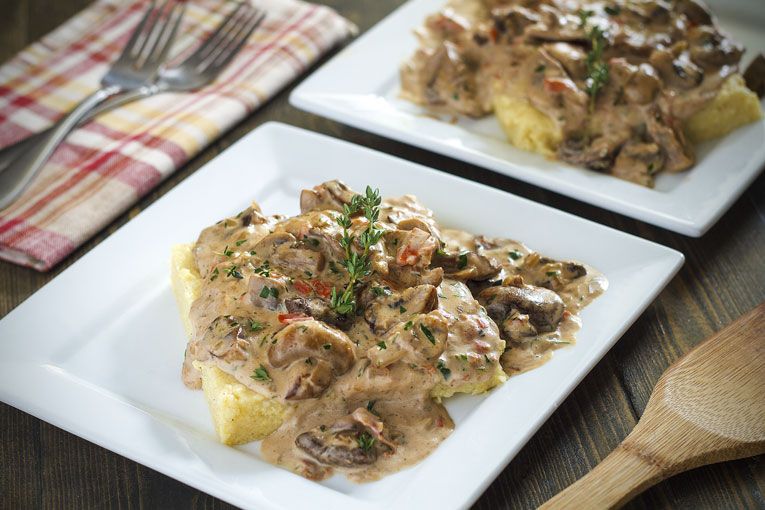 In a large, heavy skillet, melt butter over high heat. Add shallots and sauté for 2 minutes. Add mushrooms and continue to cook, stirring frequently, for 5 minutes. Add diced tomatoes to the pan, reduce heat to medium-high and cook until tomatoes begin to release juices. Sprinkle flour over the mushroom/tomato mixture and stir to blend.

Slowly add cream to the skillet, stirring constantly to dissolve flour. Bring mixture to a boil, then reduce heat to medium. Add brandy and simmer 10 minutes.

NOTE: Polenta is not unlike grits, although it’s made with a finer grind of cornmeal. Depending on where you buy it and what type you buy, it can take anywhere from a few minutes to 30 minutes to cook. Instant polenta is available at most supermarkets. To make firm polenta, just boil 3 cups of water for each cup of polenta. Whisk the polenta into the boiling water, then stir constantly for five minutes until the mixture is thick and bubbly. Remove from heat. Add salt, pepper and butter, plus a bit of Parmesan cheese if you like. Pour polenta into a buttered heat-safe dish and let stand until mixture is firm. Cut into squares and serve. For this recipe, you’ll need enough polenta for 12 servings.

Maybe you’re looking for a change, but don’t have time to search for and try out new recipes each year. Here are a few quick and easy cheats that can add variety to your usual holiday menu.