You might want to say ho-hum to this stretch of beach that’s less than an hour’s drive because you’ve been there before, but for an all-round destination on a lazy Sunday afternoon, you can’t beat it. Serious beachgoers bring their pop-up canopies, coolers and chairs and just hang out all day. Nearby food trucks—the slightly rusted-from-salty-sea-air variety serving burgers and hot dogs—provide that traditional beach-town vibe.

The bonus here is the wide 13-mile expanse of hard-packed sand that allows you to drive on the beach and park your vehicle steps from the shore. There’s a fee, but it’s so worth it. It’s also what makes power-walking, bicycling. skimboarding and sandcastle-building so popular here.

New Smyrna is also a surf spot that doesn’t get a lot of publicity, which is why those in the know love it. The best waves are near Ponce Inlet, where an exposed beach and a jetty break deliver consistent surf action almost year-round. The town also has its share of surfer-centric spots like Nichols Surf Shop. The brightly painted beach shack has been an icon with surfers since 1969. It’s packed with longboards, bodyboards and skimboards, plus beach cruisers for those who prefer to pedal—all for rent.

Of course, New Smyrna also has a quieter side for those who relish time spent with Mother Nature. Some 73 acres on the northern tip of the peninsula are kept as pristine as possible—except for the two miles of boardwalk that allow visitors to easily take in views of the Indian River, Ponce Inlet and the Atlantic. In this natural habitat, it’s common to spy birds, reptiles and other small animals rustling around in the scrub.

When you’ve had enough sun and sand, don your flip-flops and a cover-up and stroll Flagler Avenue. This seaside street is lined with cottage-like buildings that house stylish boutiques selling nautically inspired home décor and trendy beachwear. Also on the avenue are old Irish bars like Tayton O’Brians, where the Guinness flows as well as some 200 other beers guaranteed to quench your thirst after a sun-soaked day. 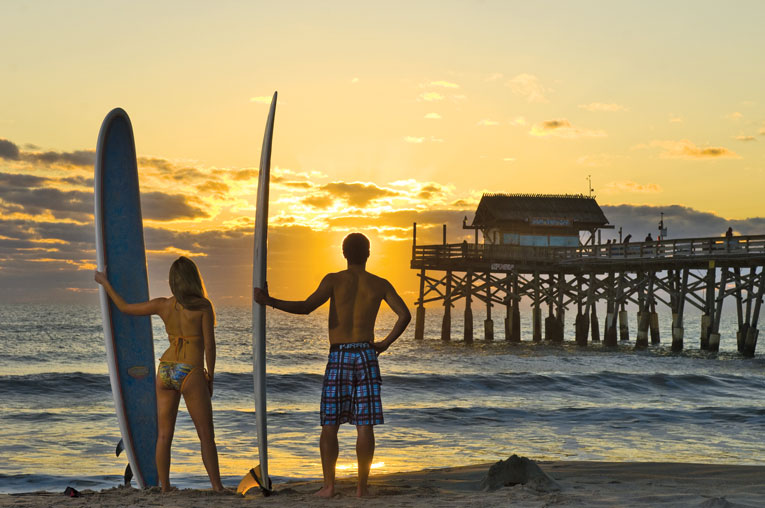 Surfers at the Cocoa Beach Pier watch the sunrise over the Atlantic Ocean.

For the Casual Crowd

From the southern side of Orlando, shoot across the aptly named Beachline Expressway (State Road 528) and hook up with Highway A1A to reach Cocoa Beach, which is part of the 72-mile stretch called the Space Coast. Driving south, you’ll pass miniature golf centers and beach shops selling Florida kitsch, before arriving at the Cocoa Beach Pier and the heart of the action. Stretching 800 feet into the Atlantic, the pier is where surfing competitions are held. After all, Cocoa Beach is home to 11-time ASP World Tour champion Kelly Slater, and there’s even a bronze statue of the surfer a few miles south of the pier for fun photo ops.

Either north or south of the pier is a good place to spread your blanket and mingle with the board-shorts and bikini crowd. You can even find restaurants, bars, shops and free musical entertainment here. Another beach-blanket spot is about a mile south at the two-story Ron Jon Surf Shop. This store-turned-attraction, open 24 hours, has rental stand-up paddleboards, bodyboards, umbrellas, beach chairs and more. Rent here and your parking is covered—a real plus considering beach parking is not always easy to find. 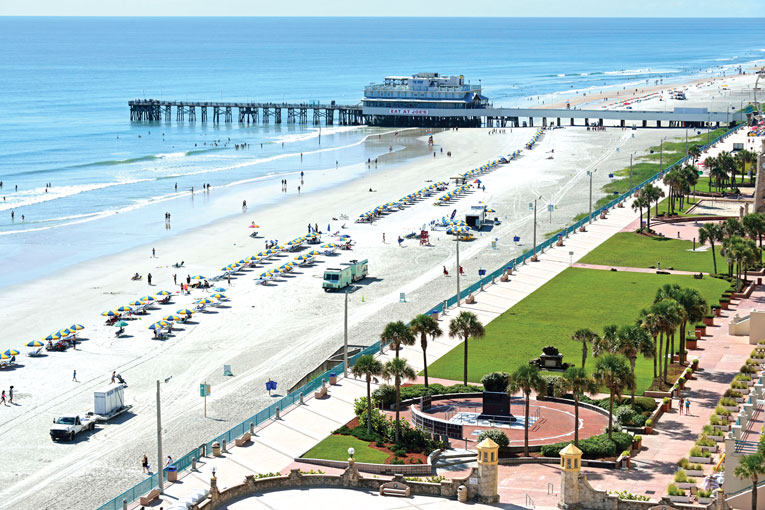 Fun on the Boardwalk

Since Ransom Olds, for whom the Oldsmobile brand was named, raced his pirate car on the hard-packed sands in the late 1890s, Daytona Beach has been synonymous with speed and thrills. And although the speed part moved inland to a state-of-the-art asphalt track (Daytona International Speedway), the memories are embedded in a trail of plaques along the boardwalk that skirts the alabaster sands. “1954 Daytona Beach Stock Car Races on 4.1 mile Beach Road Course” is etched into this beach community’s history along with the winners’ names and other memorable moments in the world of motorsports.

And as for the thrills, well that’s been kicked up a notch or two with daredevil rides on the carnivalesque boardwalk. Want to be shot skyward out of a giant slingshot? Just strap yourself into this recent addition, a bungee-style ride that catapults you some 380 feet above the sand at 70 mph. Or how about something more traditional like a spin on a roller coaster or Ferris wheel? Step into the arcades where SkeeBall, the iconic amusement park game dating back to the early 20th century, is alive and well. Along with the fun come the nostalgic smells and sights—from burgers sizzling on the grill to an old-fashioned taffy machine pulling and shaping the gooey treat.

The great thing about Daytona is that besides the wide stretch of sand firm enough to drive a car on, entertainment abounds both day and night. On the World’s Most Famous Beach, a moniker that dates back to the 1920s, volleyball players are spiking away and cyclists are pedaling rented recumbent bikes as families swim and cool off along the shore.

Walk over to the 90-year-old Daytona Beach Pier, just off Main Street, and gaze into the waters to spot stingrays flitting about the pillars below. The 745-foot pier is a favorite with fishermen, but it’s also home to Joe’s Crab Shack, where you can order steampots of crabs served with fries and hushpuppies. Or you can stop at any of the adjacent stands selling pizza by the slice, sugar-dusted funnel cakes and shaved ice drenched with flavored syrup.

For the best views of the 23-mile beach, head upstairs to The Roof. High-top tables and Adirondack chairs circling a fire pit are the perfect perch for watching fireworks every Saturday in summer, while drinking a Roof Top Rita and munching on fiery crab poppers.

If all the fanfare around the pier isn’t your style, drive south on Atlantic Avenue to the quieter Daytona Beach Shores. The stretch near The Shores Resort & Spa attracts an upscale crowd, and the nearby Cow Lick’s Homemade Ice Cream & Treats is a great place to wrap a day in the sun with a scoop of Key lime in a waffle cone. 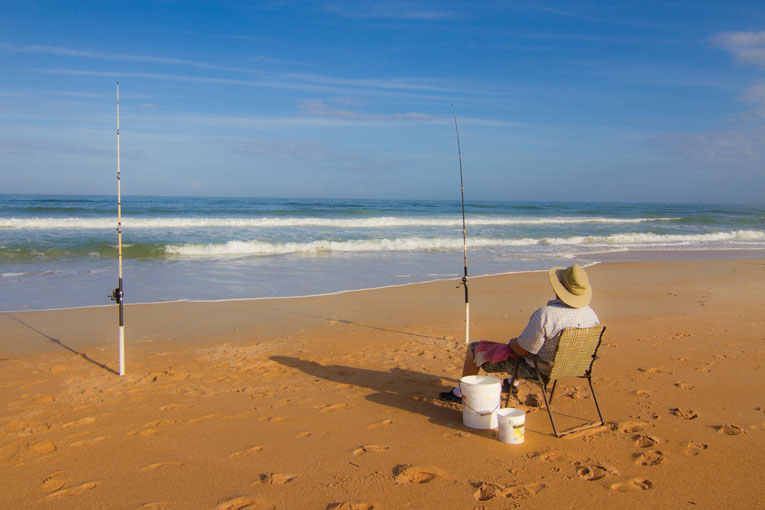 Flagler Beach’s cinnamon sands are unique to this 19-mile stretch where surf-fishing is a favorite pastime.

Palm Coast and the Flagler Beaches Chamber of Commerce

A Retro Kind of Place

This may be the only stretch of road on Florida’s Atlantic coast that comes so close to the ocean’s crashing waves you’ll turn off the A/C and open the windows to breathe in the salty sea air. In fact to developers of waterfront condos, Flagler Beach is somewhat of an anomaly. Instead of shade-casting high-rises, funky beach houses line Scenic A1A Coastal Highway, with colorful beach bars and fish shacks thrown into the mix. Nothing obstructs the view of the coarse, orange-tinged sands and the weather-beaten wooden stairs that descend to this somewhat rugged expanse of beach.

Drive down the side streets, and tidy bungalows with iconic pink plastic flamingos and ceramic seahorse birdbaths in the front yards conjure up flashbacks to the 1950s. And it’s exactly that throwback vibe that makes Flagler Beach a refreshing respite.

Its centerpiece is the Flagler Beach Municipal Pier, which bears the seaside community’s name in big letters on the roof of the bait shop. Fishing is a wonderful pastime here, but so is whale-watching from December through March, when right whales migrate to these warmer waters to give birth and nurse their calves.

In the friendly downtown, you’ll run into locals at the BeachHouse Beanery, an indie coffee house, and artists at the Ocean Art Gallery, where a selection of Florida-centric paintings adorn the walls. If you’re curious about this slice of small-town life, pop into the unpretentious Flagler Beach Historical Museum and check out the vintage photos, especially the ones of the pier dating back to 1928. 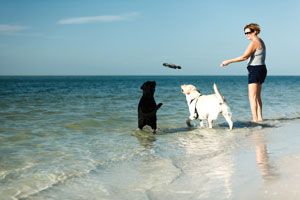 Take your best furry friend to splash and play at these Florida beaches.

Smyrna Dunes Park at the northern tip of the New Smyrna Beach peninsula is surrounded by water on three sides, giving canines plenty of space to splash about. At Lighthouse Point Park south of Daytona Beach, dogs enjoy the beach along the river and inlet. Their owners love the bright red Ponce Inlet Lighthouse that makes a fantastic background for pooch portraits. North of Clearwater Beach, Honeymoon Island State Park has a designated area where dogs can frolic in the water while you take in the view of Caladesi Island. At Fort De Soto Park near St. Petersburg, dogs run free in two fenced parks and along a quarter-mile of beach.

This article appears in the June 2015 issue of Orlando Magazine.
Categories: Local Getaways