Blending customs and religions can result in a harmonious union.

Before Lani Higgins walked down an orchid and rose-strewn aisle, a bagpiper in full Scottish regalia entered the ceremony tent playing
Highland Cathedral, in honor of the groom’s Scottish heritage. The performance was followed by a traditional Thai water ceremony, Rod Nam Sang, in which Lani and Scott Gregory cupped their hands over a silver bowl filled with flowers, representing fertility. Lani’s mother draped a white string between the bride and groom’s heads to symbolize their union. The wedding was a celebration of the couple’s distinctive heritages.

Today, more women and men with different ethnic or family backgrounds are falling in love, with multicultural weddings becoming more desirable. Blending both the bride and groom’s ethnicities, values, rituals and religious traditions into one harmonious event that keeps both sets of parents happy in the process demands a little more planning and creativity. It’s a matter of understanding and respect for each culture, and being able to bring those two different aesthetics together into something cohesive.

“The key to a seamless multicultural wedding is to personalize it with traditions or rituals that appeal to both the bride and the groom,” says Dawn Heukshorst of Orlando’s Tickled Pink Brides, who planned the Gregorys’ wedding. “From rehearsal engagements to the ceremony and the reception, multicultural elements can also be incorporated through music, food, décor and entertainment.”

For the Gregorys, flowers and décor were potentially tricky decisions since Scotland and Thailand feature opposite climates and sensibilities. So they mixed flowers native to each country in complementary colors within their wedding décor scheme, including fuschia orchids, pink peonies and roses.

The ceremony incorporated religious elements from both families. Scott and Lani performed a Thai wedding ritual, which was followed by personalized vows.

Sometimes incorporating both the bride and groom’s traditions into one ceremony isn’t so easy, especially when there are such sharp contrasts between the two cultures. Each background can be given equal weight throughout the many facets of a wedding event, from the engagement party to bachelor and bachelorette parties, to the ceremony, cocktail hour and reception.

“There are times when separate ceremonies may be necessary to keep the peace on both sides of the family,” says Nikki Khan of Big Bow Events, which specializes in multicultural weddings in Orlando and St. Louis. “If more than one ceremony does take place, don’t spend too much time worrying what your guests will think,” Khan says. “Most of them will inevitably end up enjoying being taken out of their usual comfort zones.”

The reception is the perfect opportunity to bring both sides together into a grand party that celebrates this cultural extravganza. “Décor, music, food and venue can be the great icebreaker for all of the invitees who are now going to be one big family,” adds Khan. Culinary fusion is one of the best ways to show how well cultures blend together.

After the more sensitive religious and decorative decisions have been made, the smallest thread can tie it all together. Lani and Scott, for example, both spent significant parts of their lives in Hawaii. They lived there at the same time—she as a student at the University of Hawaii, he as an Army officer—but as fate would have it, they never crossed paths. It wasn’t until Lani returned to her hometown of Winter Park to pursue an MBA at Rollins College and Scott moved to Orlando for a job opportunity that the two met. Lani’s friend, a fellow real-estate agent who knew a catch when she saw one, suggested Lani hand her client, Scott, the keys to his new downtown Orlando condo at The VUE.

“I walked into the lobby and our eyes locked,” says Lani. “I gave him the key to his condo and the key to my heart. Truly, love at first sight.”
Subtle Hawaiian touches ran throughout the Gregorys’ wedding, such as the tropical outdoor setting at the Winter Park Racquet Club and an acoustic guitarist who played late Hawaiian musician Israel Kamakawiwo’ole’s version of Over the Rainbow, giving the couple something to share from their past.

Once the traditional mold is broken, there’s no end to what couples can do. Lani and Scott didn’t shy away from anything that would make their day extraordinary. “We both are very proud of where we came from and love our parents and heritage,” says Lani. “We knew from the start that we wanted to do something special to show respect, honor and love to our parents. It was also important to us to have a unique wedding with personal touches everywhere.” 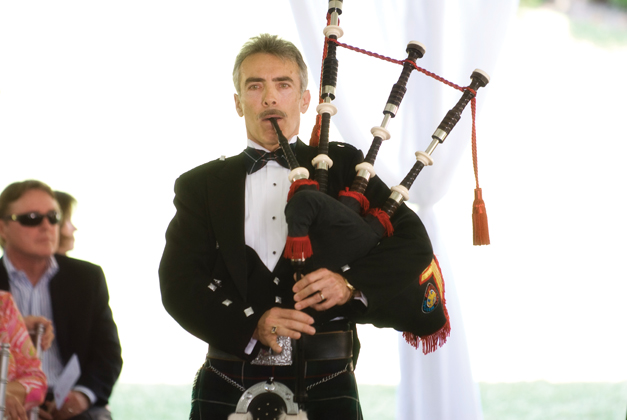 • Educate both sides of the family about what traditions are represented. Communication and translation are important. Having a dynamic person at the wedding to interpret or guide your guests through the different processes will leave no questions as to what is going on.
• When choosing a venue, be upfront about what traditions you want present for the ceremony, and find out if they will allow those rituals.
• When planning, listen closely to family wishes and expectations on both sides. People may not be very forthcoming with telling you who is going to be opposed to what, so it’s most important that you’re hearing the things they aren’t saying. Anticipating needs will vastly improve the entire experience.
• If you decide to incorporate non-traditional foods, ask the venue if it allows outside catering, and what the guidelines and prices are.

• In Scotland, brides carry a lucky sixpence in their shoe, symbolizing prosperity during the marriage.
• In Japan, couples take three sips of sake from three different sized cups during the ceremony, which bonds the couple with the spirit world.
• In Mexico, couples seal their union with a lazo, a ribbon or rosary tied around the couple’s hands by a priest as they say their vows.
• At a traditional Morrocan wedding, a dab of henna is painted on guests’ palms.
• A Hindu wedding is a family affair; a separate ceremony called Mandap honors the bride and groom’s parents.
• In a Spanish wedding ceremony, the groom presents his bride with 13 gold coins in a special purse or box.
• In Thailand, the couple must prepare or offer food for the monks in order to receive a wedding blessing.
• In Italy, the traditional bride wears green—the color of fertility—the night before her wedding and tears her veil slightly for good luck.

This article appears in the July 2011 issue of Orlando Magazine.
Categories: Venues & Guides