War has a notoriously long reach that extends into the Orlando community. 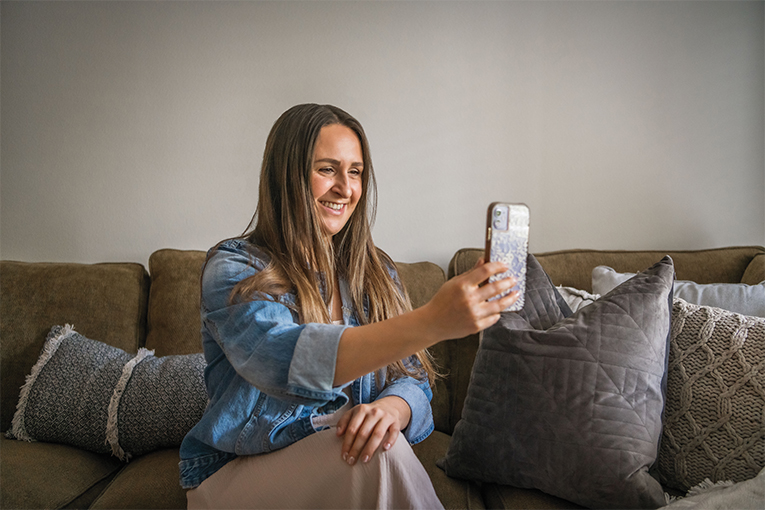 Sasha talks to her babushkaolga once a week via Skype. “I spoke to her this Sunday. Skype has made it super easy to reach out, and we also use WhatsApp. Before the war, it was all out-of-pocket payment and cost a lot of money, but Skype opted for free calls to Ukraine since the war, so at least we have that.”

Every opportunity Sasha has to connect with her grandmother is precious. “It means so much to me,” says Sasha. “Every time I talk to her, I’m amazed at how strong a woman she is. I talked to her just yesterday, and I felt an instant lift just to hear her voice and see her smile.”

Vadim Radion’s uncle is a bishop who lives in Ivano Frankivsk, Ukraine. Vadim’s uncle is actively aiding people as they flee from hot zones to safety and providing humanitarian aid, clothes, food, and shelter to Ukrainian refugees.

“Many in my family are doing what we can to help. My brother-in-law, he’s a professor, and he went back a few times and brought in bulletproof vests and first aid from America.”

Florida is home to 58,419 people of Ukrainian ancestry. Sasha and Vadim are just two people living in the Central Florida community born in Ukraine. Like many Ukrainian-born living in Orlando, they are worried about the crisis in their homeland and deeply concerned with the safety of the families left behind. 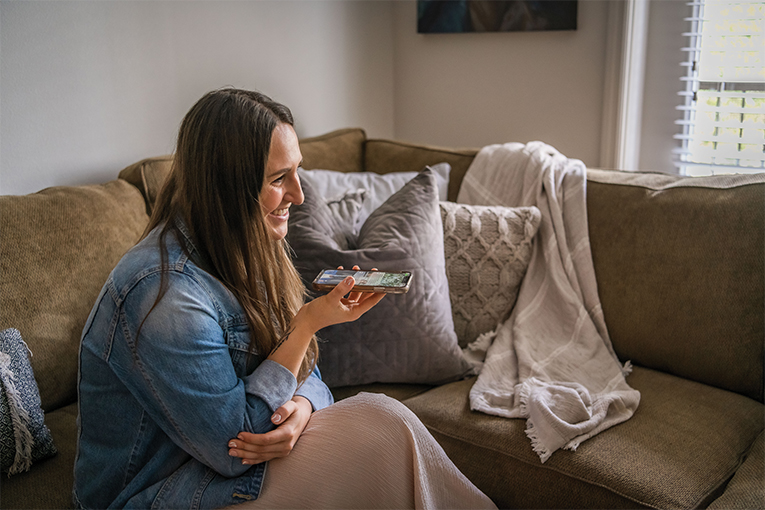 Sasha connects with her family in Ukraine. (ROBERTO GONZALEZ)

“Keeping up a brave face is impossible during a war.”

Sasha was born in Ukraine and moved to Canada when she was five. “My dad is why we could come to the United States. He was a competitive trampoline and tumbling acrobat and was competing with the USSR team and on a national and international scale.”

An invitation from a championship event by Cirque du Soleil brought the Duchenko family to Canada. “He went first from Ukraine to Montreal, Canada, and about six months later, my mom and I joined him.”

After an eight-month stint in Canada, the family moved to the central Florida area to work for Cirque du Soleil. Since then, Sasha has been back to Ukraine twice, hoping for a third visit this year. “My boyfriend had surprised me with a trip to Ukraine for the first time in what probably has been like ten years. We were expected to leave a week before everything happened over there.”

Keeping up a brave face is impossible during a war. As the conversation with Sasha begins, she is composed, friendly, albeit somewhat guarded. When the conversation turns to her family left behind, that wall crumbles away, exposing the despair just beneath the surface.

“My younger cousin, David, was drafted into the war, so he’s fighting on the front lines. Knowing they’re all safe is the biggest thing for me.”

The reality that her grandmother can hear the air raid sirens worries Sasha. “She can hear the sirens from her home, but she has enough food and says she is safe. I think my grandmother always puts on a super brave face. When I ask her how things are, I don’t get the most honest answer, but I think she’s trying to protect me. She says everything is fine, and they’re doing good over there, but she’s trying to stay positive.” 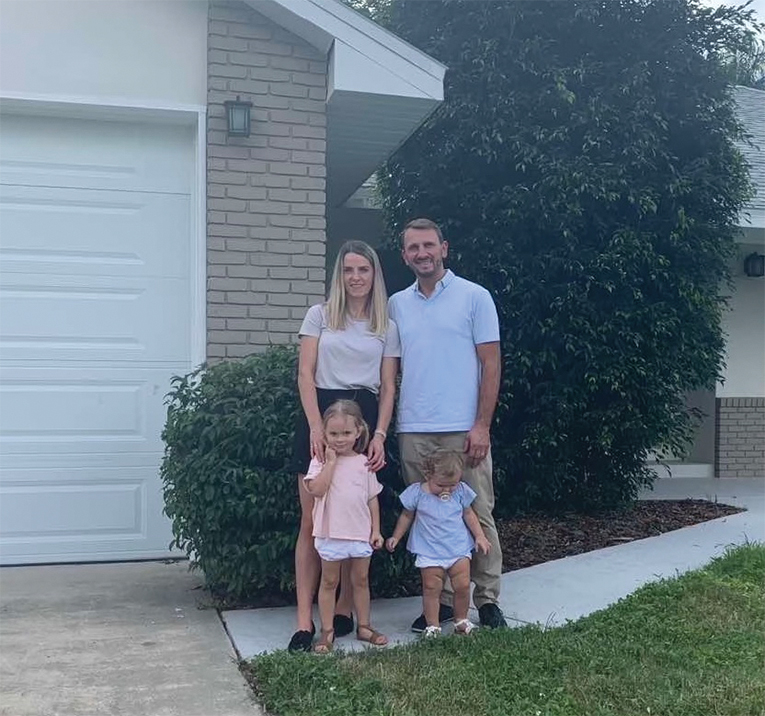 Vadim Radion with his family. (COURTESY OF VADIM RADION)

“We’re helping any way we can.”

Vadim Radion moved to the United States in 1997 from Lutsk, Ukraine. “I came to America when I was ten years old with my family, my mom, dad and all my siblings and we flew into Cleveland, Ohio. I lived there and later moved to Washington DC, where I met my wife. We got married and then moved to Florida three years back, so this is my third year in Florida.”

While Vadim was born in Ukraine, he calls America home. “I moved when I was young, so Ukraine is like a different country. I was raised in America, which is more of a homeland than Ukraine. There are a few memories of riding a bike or fishing, but not much.”

Vadim is a member of the New Life Church and active in the Orlando-Ukrainian community. “Here in Orlando, we do fundraisers and meetings to help. Our church rents from a Presbyterian church, and they have a house on the property. They gave it to a refugee family that came over from Ukraine.”

Vadim says that people all over the Orlando community are digging deep to assist. “So many people are helping. I was in contact with this lady with a house that she’s willing to fix and give to the people that they need to stay, even for free, just to get on their feet.”

“When people come over, they don’t have a history, and they have very low finances, if they have any finances at all. When refugees come to America, a majority start over from scratch. It’s really hard to start off without help. And you don’t receive help if you go through the Mexican border because there is no help from the government.”

Vadim vividly recalls the night the war began. “It was in the middle of the night; my wife was up and said that they were bombing in the Ukraine. At first, they sent missiles, and it was pretty unreal. It felt like the end of the world. In the beginning, we were focusing on Ukraine and trying to focus on family, to see what we could do to help. We’re still helping any way we can.”

That effort continues to this day for Vadim as he helps refugees settle here in Orlando. “Right now, we have two families that we are helping from our church. We have created an Amazon wish list, so if there are people who have it in their heart, they can help in that way.”

Sasha and Vadim were both born in Ukraine, but they have entirely different experiences and stories of how and why they came to America. They share their Ukrainian heritage, hopes for peace, and a shared message to not forget about the Ukrainian people.

“I think the biggest message I want to share is for people not to forget and to keep praying,” says Vadim. “It’s hard to ask for anything because you can send as much money as possible, but it still won’t be enough. The only thing that will help is for this war to be over. So I hope people won’t forget, stop caring and just go on with their lives and stop thinking about the war. Keep praying, and if you can help, please do.”

“When this war began, I had a feeling of being out of control and powerless,” explains Sasha. “The most important thing I would ask is not to forget. The news is very cyclical with a short attention span; at first, we had the initial shock of the war and what was happening. It was heavy on everyone’s heart; everyone was talking about it, and we saw it consistently. Then it just began to wear off.”
“My message is, please don’t forget what’s happening. Continue talking about it, donating to any organizations that are helping, but please, don’t forget about the people still suffering in Ukraine.”

How you can help support Ukraine and provide relief.

This article appears in the August 2022 issue of Orlando Magazine.
Categories: Community, Home Page Features
Tags: lifestyle
Want to read the whole issue? Download and read this issue and others on Magzter.