Orlando nonprofit Clean the World has turned the recycling of discarded hotel soap into a lifesaving venture.

Justin Braun, Catherine Walters,
Five years ago, Shawn Seipler was vice president of sales for a Celebration e-commerce company.  But he decided to leave his six-figure salary behind and pour his life and savings into a venture grounded in one of the first things your mom taught you:

Wash up. And use plenty of soap.

In the U.S., that’s just good hygiene. In other parts of the world, using soap saves lives by fighting the spread of acute respiratory infections and diarrheal disease, the top two killers of children. That’s why Clean the World, Seipler’s Orlando-based soap recycling company, has given away 15 million bars of soap in 70 countries since 2009.

Seipler, 37, is a man on a mission, operating out of a nondescript warehouse behind the Sheraton Orlando downtown, where Clean the World employees and volunteers recycle tons of discarded bars of soap from hotels near and far. The idea was born in a Minneapolis hotel room, where one night during a business trip in 2009, Seipler wondered what became of used hotel soap. 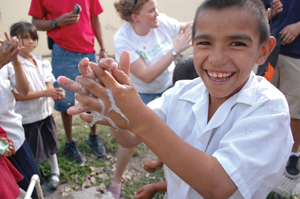 “Thrown away,’’ the front desk attendant told him. In fact he discovered that North American hotels trashed 1 million bars a day. At the time, he and business partner Paul Till were looking for a green venture that would make money. But was recycled soap really marketable?

Then, Till showed Seipler a study done in a village in Bangladesh that revealed a 40 percent reduction in diarrheal disease by locals who used soap. Seipler also learned from a UNICEF study that 2.2 million people, mostly children under age 5, die every year because of hygiene-related illnesses—and 65 percent of those could be prevented if the children had access to soap.
It was a life-changing revelation.

“I made it my mission to get soap into the hands of those who are dying because they don’t have it,” Seipler says of the decision to form the nonprofit Clean the World. “It was like we were being ordained to do this.’’

Immediately, Seipler says, he and Till “put everything we had into it,’’ including buying four $60 Kenmore cookers from Sears and setting them up in Seipler’s garage to melt down the scrap soap they managed to collect. Problem was, hotels didn’t want to pay for the service and Clean the World was going broke delivering collection bins to hotels and picking them up. Worse, the group’s seemingly can’t-miss application to the Bill and Melinda Gates Foundation for a hefty grant was quickly turned down.

Rejected but not dejected, the business partners persevered, spreading the word about their humanitarian venture throughout the community. The breakthrough came after a presentation at The Peabody Orlando. Hotel VP Alan Villaverde decided that Clean the World was well worth the investment and agreed to pay them for their efforts. Soon after, a local TV station reported on the soap-recycling effort, and that story was picked up by a New York affiliate. The CBS Evening News took notice and assigned a story. And Clean the World took flight. 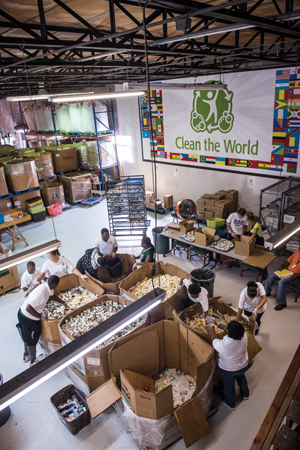 Today, the participating hotels number more than 2,000 across North America, Canada and, most recently, China.  The hotel partners pay a monthly per-room fee to cover things like collection bins and soap shipping costs. Housekeepers, many of them from countries that benefit from the organization’s efforts, are trained in how to collect the used soap.

For their efforts, the hotels receive a tax deduction and a reduction of their waste disposal fees. After weighing the product shipped from each hotel, Clean the World sends an impact statement so the partner can demonstrate to its guests the positive impact it’s making—including the environmental bonus of not dumping all that used soap into landfills.

Haiti is Clean the World’s number one point of distribution, having received nearly 2 million bars. The connection to that country came about after Seipler met Julio Brutus, a pastor who ministers to Haitians in northern regions of the country. In July 2009, Seipler, Till and Brutus arrived in Haiti with 2,000 bars of soap. They were greeted by nearly 10,000 desperate residents.
“All we could do was tell them we would come back and we have been coming back ever since,” Seipler says. “It’s an absolutely critical resource for the people of Haiti.’’

After the January 2010 Haitian earthquake, Clean the World became the go-to group for the hospitality industry to lend a hand. Disney soon became involved and that proved to be additional momentum the organization needed.

Another important partner that signed on early was the Orlando World Center Marriott.

“The results they achieved in a short time were incredible,’’ hotel Manager Ron McAnaugh says of Clean the World. “Shawn never seems to lose his passion for it. The earthquake in Haiti was where they really shone as superstars. For us, that was important because a lot of our housekeepers are from there—that really brought the concept home for them.’’
Local notables also joined the effort. Last April, Orlando Mayor Buddy Dyer accompanied Clean the World to Haiti and participated in a program to teach children how to use soap. “We have a skit in which characters Super Soap and Super Water kill germs,” Seipler says. “Mayor Dyer played Super Soap and I played one of the germs. We did that skit 20 times over a three-day period. He had a great time ‘beating me up.’ ’’

Although Clean the World personnel regularly make distribution trips, the group also has teamed up with humanitarian organizations like World Vision and Children International to make sure those who need the soap get it.  Meanwhile, Clean the World helps those in need in this country through its ONE Project program, combining recycled soap with new items like razors, combs and other personal hygiene products to create kits that are distributed to homeless shelters, disaster victims and families-in-transition organizations. Nearly 20,000 ONE Project kits went to victims of Hurricane Sandy and 10,000 were sent to Oklahoma after that state’s devastating tornadoes. Clean the World produces many of those kits through team-building efforts, where employees of companies, including those in Orlando for conventions, come together to assemble the packages.

Then there are the local organizations or individuals eager to make a difference who show up almost daily at the downtown Orlando headquarters to help with the soap processing basics.

“It feels good to do something that makes an immediate difference,” says volunteer John D’Angelo. “You recognize all the waste you’re saving isn’t going into a landfill but bettering someone’s life. It’s easy to see the direct impact and result of what you’ve done.” 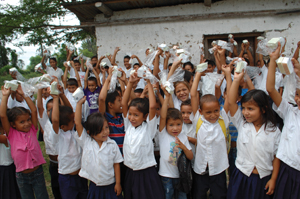 The recycling process is relatively simple. The outer layer of used soap bars is scraped to achieve a clean surface. The soap is then dipped in a sterilization solution and ground into pellets. That is fed into a soap press and 3-ounce bars are formed. And out they go.

What’s not so simple is explaining what drove two businessmen to take the chance they did—and help save an untold number of lives.

“I don’t know if it was an angel that spoke to me,’’ Shawn Seipler says, thinking back to that epiphany in a Minneapolis hotel room. “But something certainly did.’’

This article appears in the December 2013 issue of Orlando Magazine.
Categories: Community