We’ve picked 10 must-try burgers, most of which hold the promise of high calories and deep satisfaction.

A Sanford landmark since 1987, Mel’s has a very funny burger menu, including the “Dang That’s Hot As Mell” with onions and jalapenos, and the “Mounds of Mushrooms & Swiss” (“Gotta love them sauteed mushrooms.”). The fabled Colossal Mess (below left), a pound of patty, bacon, ham, cheese, onions, peppers and mushrooms, is still being served but the Hall of Fame-worthy challenge—finish one and get your picture posted—is no more.

The Big Apple (below right) might win the prize for tallest burger in our roundup. By the time the stacking of beef patty, apple slices, bacon and a chunk of Brie is done, the thing is very high indeed. The combo of melting Brie and apple should be on a cheese plate, not a burger, and yet it tastes fresh and savory all at once. graffitijunktion.com 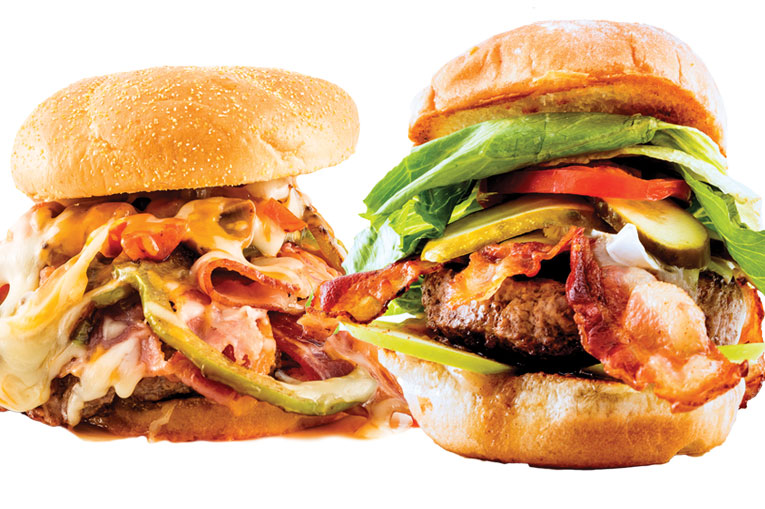 Once a staple of the high-end restaurant crowd, slow-roasted bone marrow is the ultimate source of that elusive “umami” flavor. Grass-fed marrow from the now legendary Lake Meadow Naturals is melted on top of a hand-formed beef patty, the rich, buttery taste making the accompanying onion rings and Vermont-aged cheddar almost superfluous (below left). burgercraftclermont.com

Here’s a wacky fad that begat frantic crowds in New York City two years ago and is now a country-wide staple. A deep-fried croissant-doughnut hybrid, tossed with cinnamon-sugar and surrounding a half-pound Angus burger, topped with maple bacon, smoked Gouda and a fried egg, this beauty doesn’t have an official count, but may be as high as 1,500 calories (below right). teakorlando.com 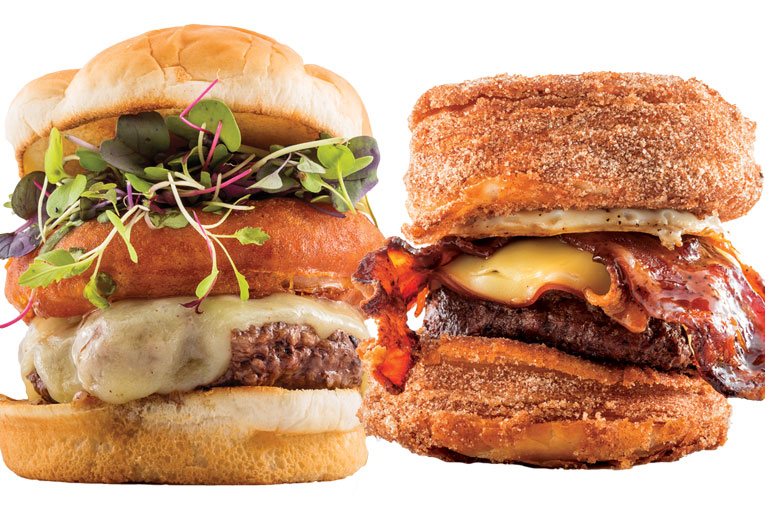 There are actually several different “surf and turf” burgers on Disney property, some combining beef with shrimp, crab cakes or, at Art of Animation, the Surf & Surf that bypasses the burger altogether. Grand Floridian’s version (below left) is the best, a succulent piece of butter-poached Maine lobster atop an Angus chuck patty, with a great contrast of flavors and textures. disneyworld.disney.go.com/dining

A four-patty monster with a side order of dare (below right): Finish the meal and get a “DD Challenge” T-shirt; lose and have your picture taken in “the burger suit.” The Challenge has become very popular, with about 350 people having taken the beef-loaded test (about 30 percent succeed). Surprise winner: a 130-pound woman who bolted down two. bethsburgerbar.com 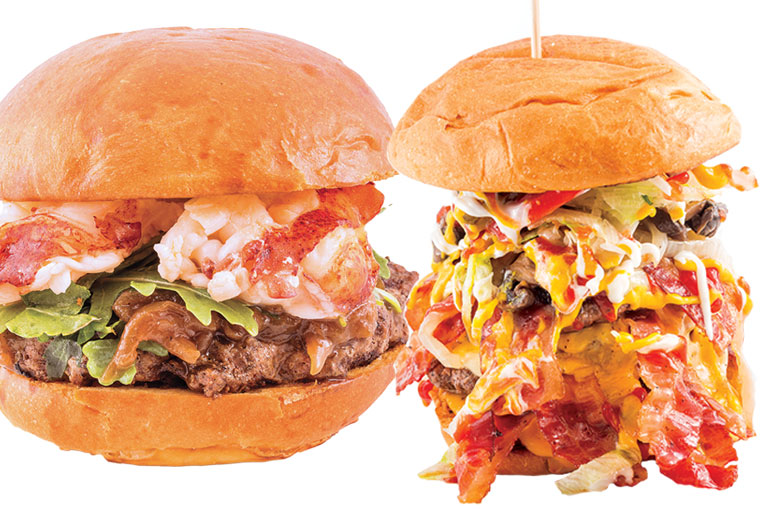 There is nothing small at Hash House. The pancakes are the size of blankets and the meatloaf is football-sized. So why should the burger (below left), with two half-pound patties, stuffed with a massive amount of bacon and mashed potatoes, be any different? hashhouseagogo.com

Nothing like a runny egg yolk to accent the taste of Angus beef. The “All Day” (below right) is either a travesty of a burger or the best breakfast ever, sort of like steak and eggs (and cheese, bacon, hash browns, grilled onions, and maple syrup) in a handheld package. burgerfi.com 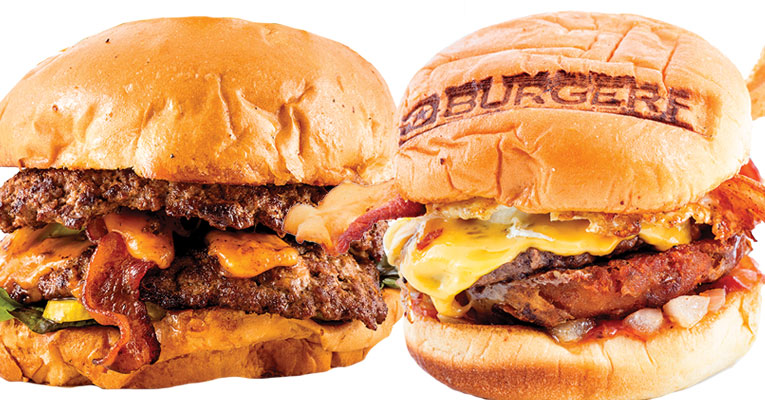 An offshoot of the Raglan Road Irish pub, Cookes takes the Irish/Scottish pub approach to burgers: If it’s good, it’s even better deep fried. Not the entire bun-and-all burger, just the patty, a battered beef cutlet served atop a rather nice bun with house-made garlic mayonnaise and tomato chutney (below left). raglanroad.com/stuff-yourself

It was originally called the “Hunka Hunka Burnin’ Love” burger (below right), and although ahead of his time, Elvis’ fave combo of peanut butter, bananas and bacon is becoming a popular burger topping. The one-pound burger does take up a lot of real estate: a half-pound version is available for the weak. thecowfish.com 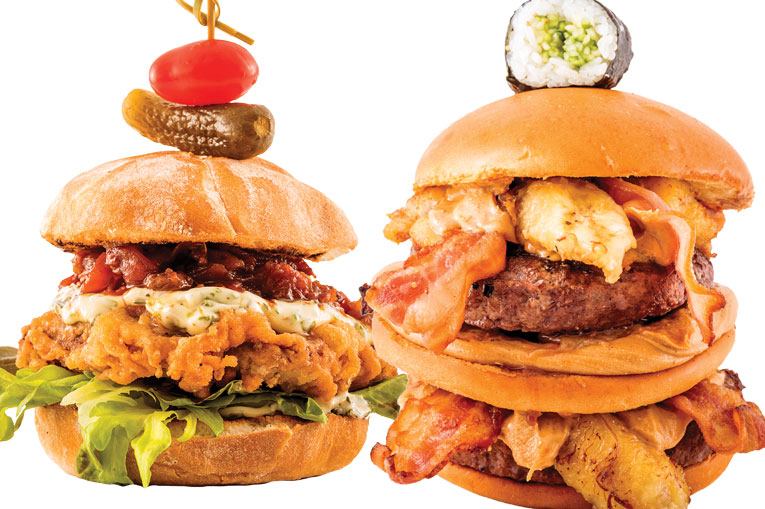 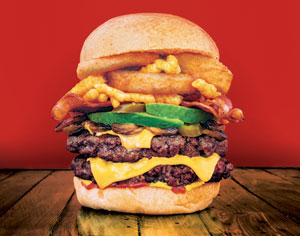 Want to dig into that burger on the cover? It was made especially for us by Beth’s Burger Bar and is available at both locations through October. Just ask for—you guessed it—the O-Mag Burger. What’s between the buns? Two patties (1 pound of beef); American cheese, ketchup, mustard, avocado, jalapenos, bacon, Cheetos, sauteed mushrooms, and onion rings. Go for it! bethsburgerbar.com