The whimsical game of quidditch featured in the Harry Potter novels has a real-life Muggle version, and it’s more than meets the eye.

LISTEN AS A 20-YEAR OLD ALLICK Jorgensen rattles off his most recent sports injuries—broken ribs, broken collarbone, pulled hamstring—and you’d guess he was a linebacker. Look at him, and that will make your assumption all the more real. At 6-foot-1 and 180 pounds with a muscular build, Danish background and manly beard, he was destined for athletics.

It’s true that he is a former football player, but these injuries are from another sport that began to dominate his life six months ago. His new love is Muggle quidditch, the earthbound version of the magical aerial game featured in J.K. Rowling’s Harry Potter novels, where players dart around on enchanted broomsticks.

But for all of you who think quidditch is for nerds, think again. Jorgensen, with his dirty-blond faux hawk, blue eyes and stylish shades, will prove you wrong.

Granted, the Muggle (or non-magical) version of quidditch is a coed game where players run with broomsticks clutched between their legs. That, plus the fact it has only been around since 2005, makes it easy to immediately dismiss it as a legitimate sport. However, after spending a weekend at the Quidditch World Cup VI, I found out it is so much more than that. 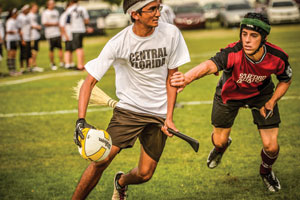 For starters, quidditch, which is now an intercollegiate sport, is a mix of dodgeball, rugby, track and wrestling where players collide in full-force tackles. It's extremely intense, physically demanding and highly strategic (there are more than 700 rules in the sport’s 172-page manual). And with four balls on the field, it’s like four games going on at once.

Many of the novelized attributes of the game are still intact. Each team has seven players. The chasers throw each other the quaffle (a slightly deflated volleyball) and score 10 points by hurling it through elevated hoops. Meanwhile, the beaters throw bludgers (dodgeballs) at athletes, sometimes knocking them off their feet. Then there’s the snitch.

In the movies, wizards try to snatch the snitch, a winged golden ball that’s “wicked fast and damn near impossible to see.” Seekers, like Harry Potter, are in charge of capturing the snitch to gain an extra 30 points and end the game. In real life, the snitch is a yellow-clad runner, usually with a background in cross-country running or soccer, who uses any tactic—cartwheels, water balloons or wrestling moves—to evade capture.

JOCKS VS. NERDS
With the basics down and a true curiosity about the game, I head toward the crowds at Austin-Tindall Regional Park in Kissimmee. It’s 8:15 on a breezy Saturday morning as thousands surround an elliptical pitch for the opening ceremonies.

Dozens of snitches, one wearing a fuzzy pair of wings, another sporting a halter top and pink socks, pump up the crowd. The stands are filled with 80 teams from more than 22 U.S. states and five nations. The drumbeats set the frenzied pace. The lady next to me in the bleachers is wearing a cape and Lego earrings shaped like tiny Harry Potters. 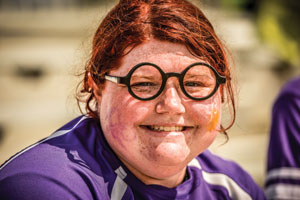 And when a young man decked out in a white, three-piece suit appears, the crowd really lets loose. “This sport should be illegal, it’s so addicting,” says Alex Benepe, the International Quidditch Association commissioner and cofounder of the sport.  “I feel bad for other sports; they only have one ball.”

Several minutes later, the infamous “Harlem Shake” is pumped from the loudspeakers and everyone rushes the field. Balls are flying in the air. Players are convulsing like they would at a nightclub. It’s the kind of high-spirited pep rally that would get anyone excited—Harry Potter fan or not.

As I make my way over to watch Jorgensen’s team, the UCF Nearly Headless Knights, take on Stanford, I am almost trampled by six young men sprinting at top speed. They are wearing soccer cleats, headbands and impressive uniforms.

In stark contrast, there’s Alivan’s, a vendor that sells the latest in magical wands and brooms, and a young, mop-haired guy selling Snitchwiches, a peanut-butter-and-Golden-Grahams concoction stuffed between two slices of whole wheat bread. It’s clear that some are here to clobber their opponents while others want to relish the nerdish camaraderie. Somehow, it all works.

GAME TIME
It’s about 10:15, and UCF is ready to take the pitch, but not before a quick war chant. “Quack, quack, quack,” they shout in a huddle.  “Get prime on three. Optimus Prime!”

The team is a mix of soccer players, ultimate Frisbee players, a few football players and even a former pole vaulter. Seven players kneel in front of the hoops on either side of the field. As their heads bow and eyes shut, the snitch, Max Meier, 19, from Neenah, Wisconsin, snares the spotlight, revving up the crowd by getting the wave going.

After leaving the pitch, the snitch photo-bombs a few snapshots, climbs across the Porta-Potties and hops aboard a golf cart.

Meanwhile, Stanford quickly takes control and scores five goals before UCF can score. Later in the game, though, UCF gains points as Stanford players seem worn out. As a first-time quidditch spectator, I am surprised by the aggressive style of play. In other words: When it comes to tripping, wrestling, tackling and sliding, almost anything goes.

Play-by-play commentary from the announcers, who sound more like improv comedians, brings smiles to faces in the audience: 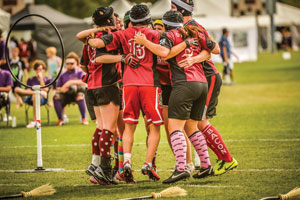 About 20 minutes into play time, Meier returns. He runs around on the pitch and soon looks bored, so he has the crowd start counting the laps he makes. After lap eight, he puts his arms into his shirt to handicap himself.

Soon after, the Stanford seeker manages to pluck the tennis ball tail stuck to the back of Meier’s shorts. Game over. Final score: 120 to 40, Stanford.

The Nearly Headless Knights go on to play two more games, winning one and losing the other. As a result, UCF is knocked out of the tournament.

“We were strong and had great plays,” Jorgensen says. “Just not lucky enough on the snitch grabs.”

Soon after the disappointing loss, it’s back to whimsy again when half of the UCF team heads over to see the punk pioneers of wizard rock, Harry and the Potters. Hundreds of fellow players and parents wander over to the concert stage to watch the band play hilarious hits like “Save Ginny Weasley” and “My Teacher Is a Werewolf.”

Later on, Jorgensen posts on his Facebook page: “I finally realize that quidditch has taken over my life the past six months. Though that's not even the problem. The problem is that I want more! I want to win the World Cup more than anything next year. In other words, here starts my career in professional sports.”

The next day while watching the semi-finals, it hits me. As I find myself woo-hooing and becoming emotionally invested in the teams, I realize I’m hooked. Somewhere along the way, I became a fan and developed an intense respect for the sport.

And then I remember something Benepe emailed me a few weeks back: “Quidditch holds a special power over people.”

INSPIRED TO PLAY?
Here’s the gear you’ll need:
• Customized broom from Alivans.com
(brooms are required, meaning you only have one
hand available to catch and throw the quaffle)
• Soccer cleats
• Headband
(colors correspond to the position you play)
• Uniform
On the pitch
• 7 players
(3 chasers, 2 beaters, 1 seeker, 1 keeper)
• 4 balls
(1 snitch, or tail; 1 quaffle; 2 bludgers)
• 1 snitch
(he is let loose at the beginning of the match, then
returns 20 minutes later; the team that captures
his tail gets 30 points, the game ends and points
are totaled to determine the winner.)

Check out Sarah's video of the quidditch experience at http://www.youtube.com/watch?v=UdGnXCqq6Rk

This article appears in the July 2013 issue of Orlando Magazine.
Categories: Community