A sophisticated playground, Boca Raton is everything its early founders imagined—and more. 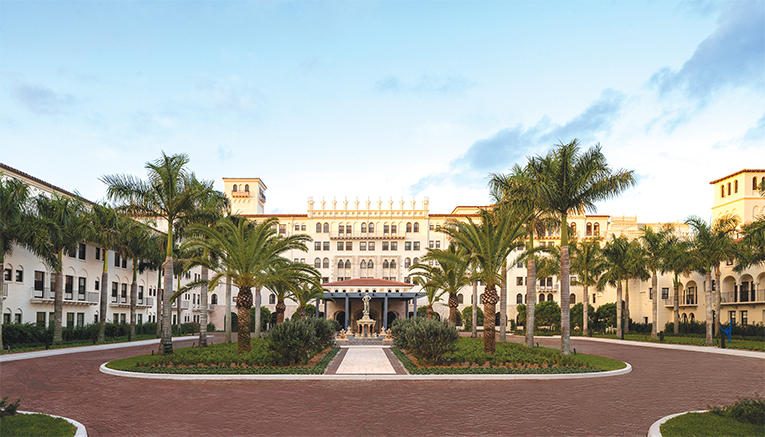 The entrance to The Boca Raton resort greets visitors with tall palm trees and historic coastal elegance. (COURTESY OF THE BOCA RATON)

Almost 100 years ago, famed architect Addison Mizner set his sights on two miles of glistening oceanfront property and acres of land in a small farming community called Boca Raton, tucked between wealthy Palm Beach and booming Miami. It was the mid-1920s, an exciting time for Florida development, and Mizner, fresh off of his success in Palm Beach, was considered an architecture genius. So it was no surprise when the “society architect” announced his next project: to turn Boca Raton into the world’s premier resort and most architecturally beautiful playground.

Fast forward to the 21st century, and Boca, as it is often called, is no doubt one of the state’s most posh cities, anchored by The Boca Raton resort, which stands as proof of the realization of Mizner’s dream. The resort and the city’s founding father both have a big presence in Boca. Travel through downtown and you can’t miss the statue of the slightly eccentric Mizner holding his pet monkey Johnnie Brown atop a tower at the upscale Royal Palm Place. Streets and shopping complexes are named after him as well. Meander Camino Real, called “Royal Highway of Boca Raton” in 1925 when it was planned, and you’ll come upon the resort’s entrance, announced by rows of royal palms standing ramrod straight alongside a flowing sea of white petunias. 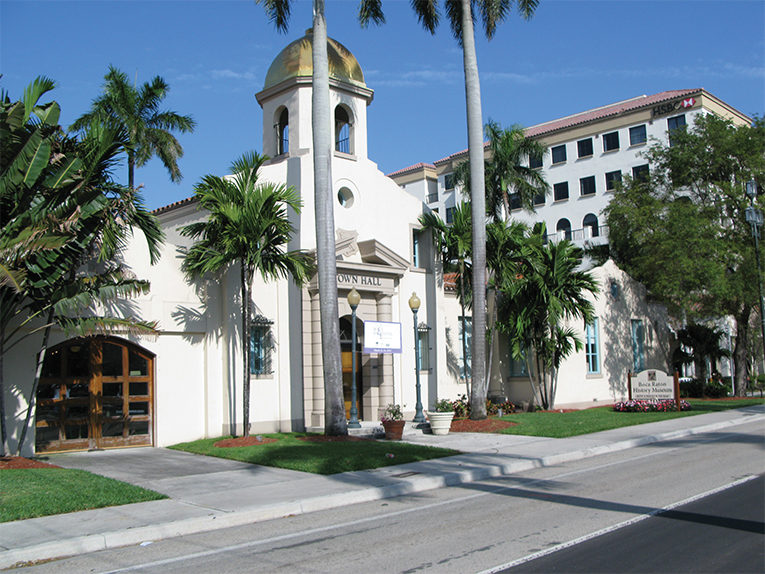 Needless to say, a stay at The Boca Raton is still one of those bucket-list experiences. This past November, the resort and private club emerged from a $200 million transformation, making it even more desirable. For inspiration, the new owners, MSD Partners, embraced the Golden Era of Travel, the years from the 1940s to the 1960s, when Americans on holiday didn’t shy away from dressing up and spoiling themselves with sumptuous surroundings. Today, the resort has all the elegance of mid-century glamour—most evident in its furnishings right out of a Mad Men episode as well as restaurant offerings reminiscent of the 1940s. For example, MB Supper Club presents a prix fixe dinner of Oysters Rockefeller, Veal Oscar and Baked Alaska. Tables are set with coupe glasses for champagne and 1940s china with the hotel’s monogram in gold. On stage, B Gordon plays Nat King Cole and Frank Sinatra on the piano.

The historic resort, recognized by its pink exterior since the 1960s, was returned to the creamy coastal white it was painted when it first opened its doors in 1929. Elements of its Mediterranean Revival style—a blend of Spanish, Portuguese, Italian, Mission and Pueblo architecture—are preserved, from gothic arches and decorative columns to ornate fireplaces and fountains boasting goddess statues and European tiles. Although there are five experiences to choose from, the adult-only Yacht Club is the most recent to totally reopen. Expect concierge and butler services as well as complimentary breakfast served on the 8th floor with views of the Atlantic, Lake Boca Raton and the marina, where million-dollar yachts polished to perfection by 24/7 deckhands sparkle like diamonds in the sun. 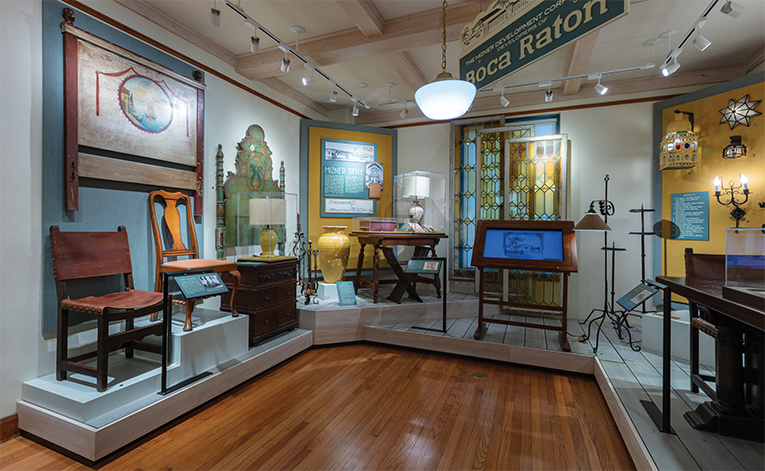 The newest addition is the Harborside Pool Club, where an infinity pool and stylish cabanas lure adults. A family pool is set adjacent to a lazy river, towering tube slides and a pirate ship splash pad. For guests who want the ocean, both a shuttle and water taxi whisk guests to the Beach Club.

Although the resort is an important part of Boca, so is the downtown, starting at Mizner Park. The complex is part green space with gazebos, oversized chess game and pint-sized putting green, and part commercial with eateries, fashion boutiques and fun shops lining both sides. Locals love Max’s Grille, a sidewalk American bistro that was one of the first tenants when Mizner Park opened in 1991; after three decades, it still overflows with diners. Pop into Sloan’s Ice Cream parlor for a cone of coffee and doughnuts, or hit It’s Sugar for old-fashioned candy. Among the shopping highlights are Tina Stephens, offering comfy casual women’s wear; Marcello Sportswear, with exquisite Italian men’s clothing; and Sur la Table, brimming with eclectic home items. 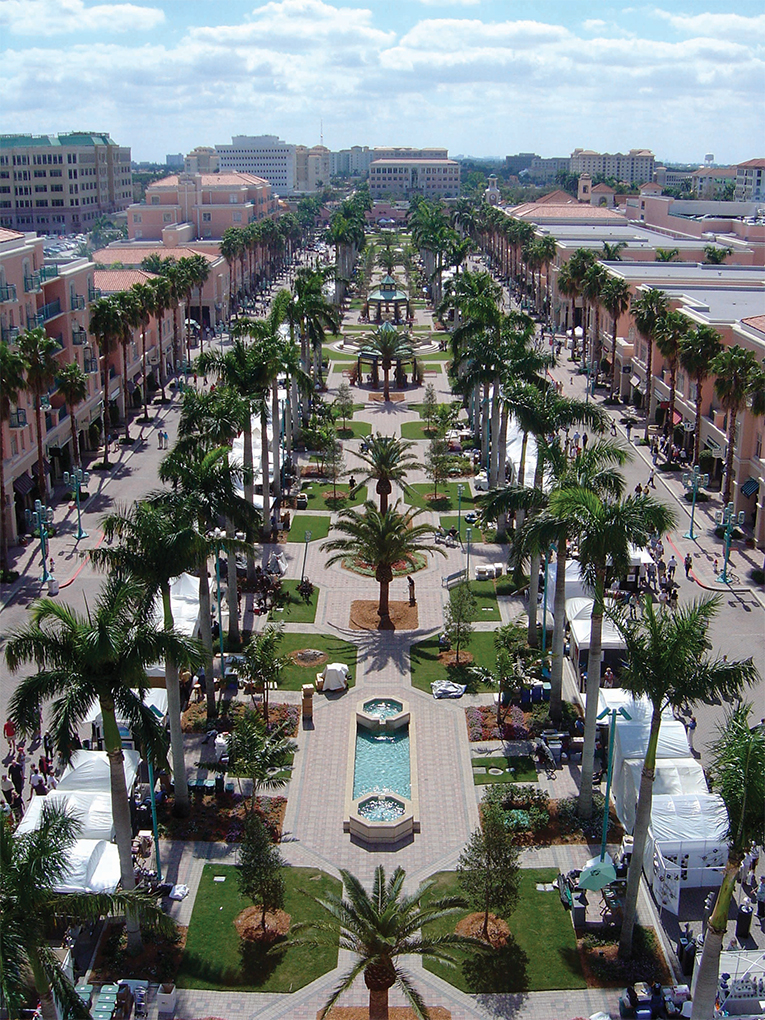 (AERIEL VIEW OF MIZNER PARK, COURTESY OF THE PALM BEACHES)

Anchored on Mizner Park’s north end is the Boca Raton Museum of Art, where the traveling exhibition Art of the Hollywood Backdrop runs through January 2023. Original artwork from iconic MGM films such as The Sound of Music and Ben-Hur are on display. The museum’s permanent collection covers the gamut from Olmec statuettes dating to 800 B.C. to works by present-day artists. At the adjacent amphitheater, audiences enjoy tribute concerts, local youth orchestra performances and other cultural activities.

Head to the streets surrounding Mizner Park and you’ll find the city’s bubbling culinary scene. Buzzy places like Louie Bossi’s Ristorante are packed with patrons dressed to impress, and waiters snake their way through the dining room and sidewalk tables with plates of heaping pasta. Around the corner, Corvina Seafood Grill, one of Boca’s newer restaurants featuring Washington D.C. chef Jeff Tunks at the helm, presents creative seafood dishes. Look for Moqueca Baiana, a Brazilian fish stew, and Bahamian conch and salt cod fritters. Another tried-and-true spot is Yakitori Sake House, where lychee martinis and a selection of 35 signature rolls delight diners.

For those fascinated by Boca’s history, a stop at The Schmidt Boca Raton History Museum is a must. Housed in the old Town Hall easily distinguished by its gilded dome, the newly redesigned museum has designated exhibition rooms for the pioneer days, Addison Mizner, World War II and other interesting things most visitors don’t know about the city. thepalmbeaches.com 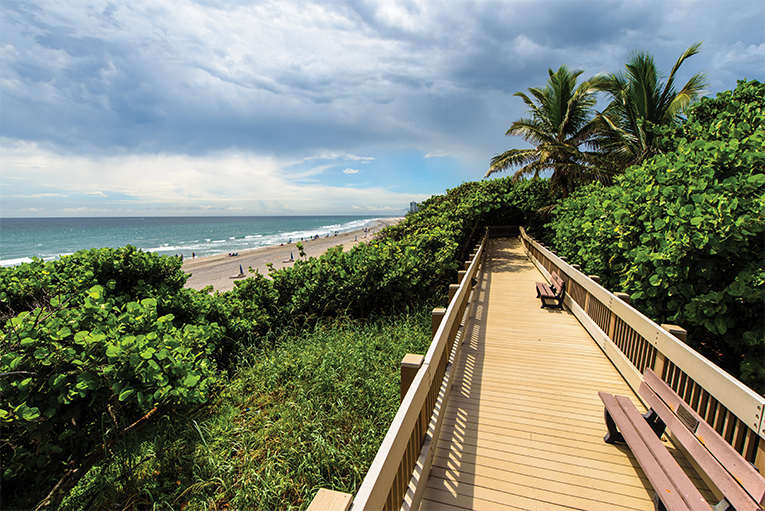 A lesser-known gem, Boca’s Wick Theatre & Costume Museum is a great venue for theatergoers who appreciate smaller, intimate settings. Plus, a visit to the costume museum for an up-close look at stunning outfits that have graced the stage is a bonus.

Not staying at The Boca Raton resort? You can still explore the hotel by joining a tour with The Schmidt Boca Raton History Museum. Curator Susan Gillis takes small groups on regular walk-throughs of the historic property as well as other noteworthy city sights. Inquire at: info@bocahistory.org

This article appears in the May 2022 issue of Orlando Magazine.
Categories: Travel
Tags: Boca Raton, Florida, getaway, staycation, Travel
Want to read the whole issue? Download and read this issue and others on Magzter.