How one woman provided artists of all ages a place they could call home.

Bohemian isn’t a word that comes up when describing Winter Park. But the artist-filled warehouse on Railroad Avenue could have fairly been described as such.

Rigged-up working studios carved from raw space gave each of the McRae Art Studios artists their place. It wasn’t always easy: a single utility sink, uneven floors that made carting works in and out difficult, a loading dock with no ramp and only partial air-conditioning. Picture how it felt on a summer day when ceramic artist Susan Bach had to fire up her kiln to 2,000 degrees. It wasn’t perfect, but it was home.

Many of the artists had worked together since the collective found its first home in Orlando in 1986, a lease on McRae Avenue (near Florida Hospital) secured by George and Marty Whipple. They moved several times—another stop on McRae, then Alden Road, and finally to Winter Park in 1999—but always took the McRae name with them.

Through the decades, members of the group relied on one another to create, collaborate, consult and cohabitate. And then word came from the landlord that their home was up for sale and they’d need to vacate by October 2016.

The search for a new building was set wider and wider. They needed a building that could house enough artists who could pay an affordable rent that would cover the lease. Said Stephen Bach, then-president of the group, “I remember being in my studio and thinking `I don’t know how we are going to put this together.’ We couldn’t find anywhere close in town.”

So there they were, adrift, no land in sight, seriously considering the possibility that they’d have to disband. Then along came not just their lifeboat, but a veritable yacht, captained by Orlando philanthropist Bickley Wilson. 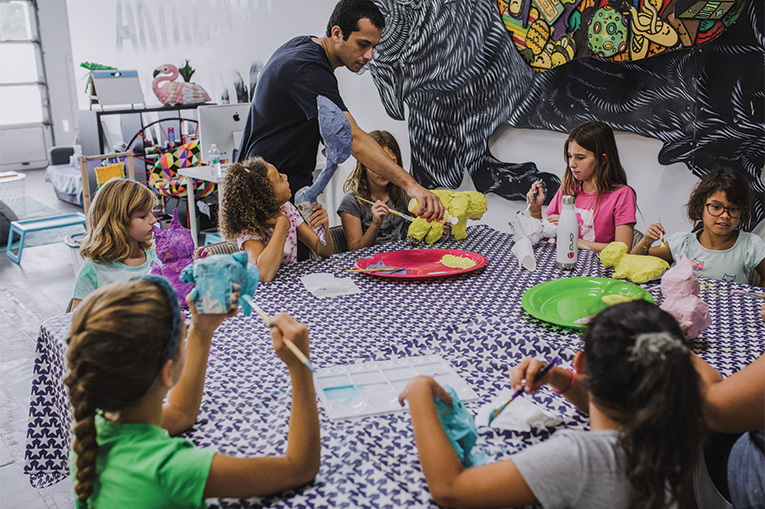 A Matchmaker and an Angel

Perhaps you haven’t heard of Bickley Wilson. Her name isn’t on buildings or associated with annual charity galas. A retired psychotherapist, she serves on the boards of Shepherd’s Hope, which provides volunteer medical services to families in need, and Mad Cow Theatre. In 2012, she combined her twin passions by forming ArtReach Orlando.

“It was a dream to bring art to underprivileged kids,” she says, “to build their self esteem and let them know they count.”

ArtReach began as a mobile classroom that operated from a van, bringing art to children who otherwise wouldn’t be exposed to it. The organization’s most robust program to date is working with teens trying to complete their GED at Orange County Academy in Bithlo, where art combined with counselors helps kids connect with and process emotions. Another ArtReach program focused on farmworkers’ children in Apopka. A permanent location wasn’t exactly part of the blueprint.

That is, until ArtReach community outreach director and local journalist Brendan O’Connor, whose ear-to-the-ground knowledge of the ousted artists as well as potential buildings for sale led him to ask Wilson: “Would you be interested in buying a building? I know a lot of artists looking for space.”

“Whenever Brendan comes to me with an idea, he knows I’ll say `yes,’” says Wilson who told him to go and find one.

O’Connor learned about the potential sale of a 10,000-plus-square-foot auto-body shop at Westmoreland Drive and Arlington Street in the Parramore neighborhood, and he pitched a big-concept idea to Wilson about a group of two dozen dispossessed artists: “Why don’t we ask McRae to be the tenant of this new building?”

And so they did. McRae’s Bach still recalls the text from O’Connor. “This has got to be a hoax,’’ he thought. But the leaders of the artists’ collective met with Wilson, “and she explained what she wanted to do and that she loved the idea of sharing the building she was buying with working artists.”

Next, Wilson and O’Connor invited Orlando architect Ryan Young, whom O’Connor had met through Young’s wife Julia, the founder of the youth literacy non-profit Page 15, to come along for a look. The merry band of artists, architect, angel and matchmaker took a field trip to the Parramore building.

What Young recalls seeing was “incredible open space with high ceilings, an exposed steel structure and beautifully filtered light through old (but dirty) skylights.” The architect, whose hallmark is showcasing the beauty of industrial design, saw the potential for the expansive glass roll-up doors that flanked the east and west sides of the building, with a gallery space running through the middle.

Initially Wilson had only intended to buy the building and leave it to the artists to shape their spaces as they had in all their previous locations. But after seeing the space with them, says O’Connor, “She was inspired to give them the space they’d never had.”

Wilson bought out the long-term tenant’s remaining lease, purchased the building and contracted Young, of Interstruct Inc., to reimagine the several-decades-old body shop to best serve the artists and ArtReach. “McRae was all very brave and jumped into it,” says O’Connor. The plan was (and remains) that McRae’s rent would cover the costs of building out their space.

By the summer of 2016, a plan was under way. It wouldn’t meet the deadline for McRae artists to vacate their Winter Park home in October, but it promised something better—a custom-made home for the following spring.

ArtReach’s needs were the most straightforward. A brick-and-mortar classroom would provide a permanent space for the group’s Artists in Wondercamp summer program that would be safe and secure, literally (there’s a chain-link fence around the property). However, ArtReach wasn’t in any hurry to move in, so the focus was first on the needs of the McRae artists. By May of 2017, the collective had moved in.

“This place is like a candy store for us,” says Bach, “fully adapted for our needs.”

For instance, “These beautiful tall walls, good lighting—including skylights—and flat floors,” says Bach, remembering the wobbling carts of their Winter Park days. Best of all, every artist now benefits from air conditioning, which many didn’t have in their former space. “Those without often had to vacate their workspace during the summer, which really wasn’t fair, considering everyone was paying rent.”

In addition, the new McRae Studios include a dedicated woodworking studio and a kiln room. If you happen to visit and pick up the scent of pine, that’s because artist Todd K. Fox is raku-firing his ceramics, relying on wood heat in the manner of the ancient Japanese tradition. Now, no one has to leave the building.

Matriarch Marty Whipple’s favorite feature of their home? “Ice cubes!” she says enthusiastically, pointing at the stainless steel refrigerator along one wall of what is now a skylit gallery and common space where the group recently hosted their second C-Note Sale. Each artist contributed works to be sold for a hundred bucks, the proceeds used to help further develop their space. Spring and fall open houses offer a chance for the public to tour the studios, meet the artists and see their works.

Asked if the new space has changed the work, Bach replied, “I think it allows us to do better work. We can see better here. It’s just an easier work environment. If you are struggling against your environment, you can’t do your best work.” 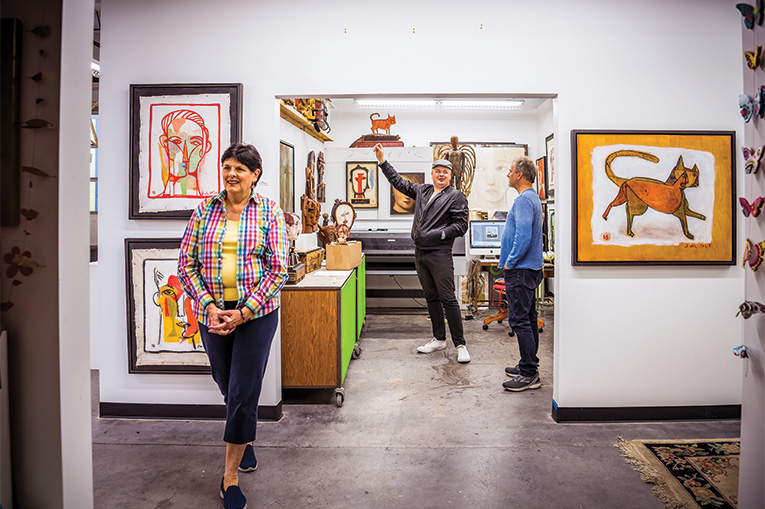 Wilson, Brendan O’Connor and Whipple in the space. (ROBERTO GONZALEZ)

An Art Space for Kids

ArtReach claims a much smaller footprint at 1000 Arlington because they have the most impact by reaching out where the children are. For instance, last summer a Disney grant enabled them to offer an art and literacy workshop at every Orange County library location. But thanks to a mayor’s matching grant, they were able to invite kids on scholarship to participate in their Artists in Wondercamp program, held in their new permanent classroom, made just for their young artists.

Two whimsical mascots hold court: an oversized stuffed whale repurposed from an Anthropologie store display hangs from the ceiling, and a mural-sized black-and-white buffalo whose innards are filled with colorful painted items such as pizza, ballet shoes and a violin. If you think you’ve seen it before, you’re right. The mural used to be on the Orange Studio building in the Mills 50 District and was ArtReach’s first public art project that paired its All Star Kids with international artist Boy Kong.

In addition to the classroom, ArtReach also has two studios they provide to a rotating roster of artists-in-residence, whose only obligation is to teach one workshop. Beyond that, the group is pausing, waiting to better understand the needs it can help meet. “We want to make sure that what we are doing is meaningful in the neighborhood and doesn’t disrupt,” says O’Connor.

While ArtReach evaluates how to best serve its community, the potent combination of young artists and mature professionals as joint tenants under one creative roof isn’t lost on anyone.

“I believe in an energy of a space,” says Wilson, referencing the 23 working artists of McRae and ArtReach’s own classroom. “When you step inside, there’s such a creative, positive energy.”

“For the children to go in during our summer camp and experience the artists willing to show them their studios, it couldn’t be a better place,” says Wilson.

“I love the property, the artists and art, and the kids. That’s my heart. We’re not going anywhere.”

A promise has been made.

The next McRrae open house will be from 5 to 9 p.m. May 18. Info: mcraeartstudios.com