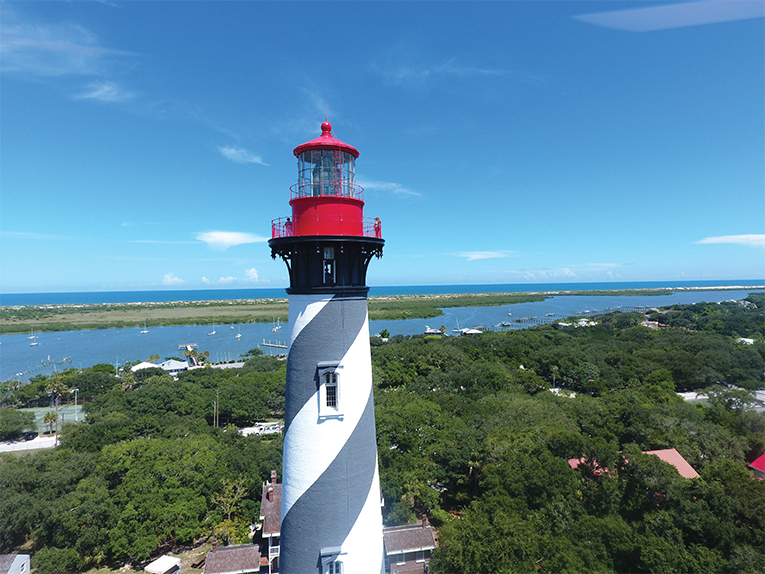 The St. Augustine Lighthouse stands at the north end of Anastasia Island and was built between 1871 and 1874. (ST. AUGUSTINE LIGHTHOUSE & MARITIME MUSEUM)

From Orlando, I-4 and I-95 might be the speediest way to get to St. Augustine, but for road warriors out for an adventure, there’s the A1A Scenic and Historic Coast Byway that takes you directly into the Old City. Pick up the 72-mile ocean route at Flagler Beach, where orange-tinged sands and crashing waves skirt the two-lane road. 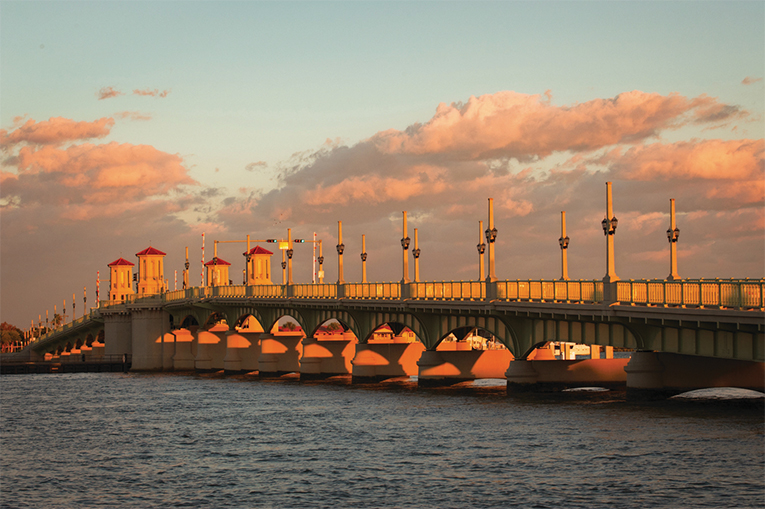 The byway continues through beach towns lined with pastel houses on stilts and Mediterranean-inspired homes. When you reach St. Augustine Beach, keep an eye out for Anastasia State Park. Paddlers and birders enjoy the park’s Salt Run, an estuary teeming with wildlife; hikers trek trails through a maritime hammock; and nature lovers are rewarded with a white sandy beach set against an intense blue sea and sky.

It takes 219 steps to climb the spiral staircase inside the black-and-white tower to its red top, where a Fresnel lens with 370 prisms can be examined. From the viewing platform, visitors gaze at the Old City’s skyline punctuated by iconic towers and red roofs that are typical of St. Augustine. In the Maritime Museum, the new Shrimpin’ Ain’t Easy exhibit tells the story of Italian, Greek, Spanish and Portuguese immigrant families who played major roles in the area’s shrimping industry. Another exhibit, Wrecked, showcases artifacts retrieved by maritime archeologists from a 1782 British shipwreck off the coast. Look for the British King George III gold coin dated 1776, the year the United States declared independence from England, and watch a video showing how a “four pounder” long gun was salvaged and restored. 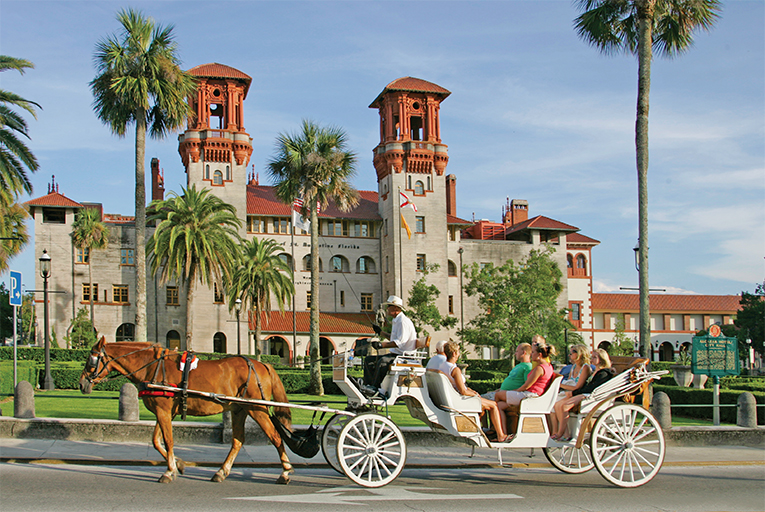 Once you cross the Bridge of Lions, you’ll be in the heart of historic downtown, where exploring brick streets on foot is easy. The most popular area is the Colonial Quarter, filled with buildings from a bygone era, plus shops, eateries and art galleries. Immerse yourself in life under the Spanish (1565-1763, 1784-1821) and British (1763-1784) with a visit to one of the historic homes.

The Ximenez-Fatio House Museum has a history of being run by single women. It was built in 1798 with coquina extracted from an area quarry. After its owner Don Andres Ximenez and his wife passed away, the property remained in the family until Margaret Cook and her husband bought it in 1825. Upon his death, Margaret converted it into a boarding house. It was managed by and sold to single women over the years, with Louisa Fatio obtaining it in 1855. Period furniture, tabby floors of crushed oyster shells, and a kitchen with the only original beehive oven in Florida are noteworthy elements. 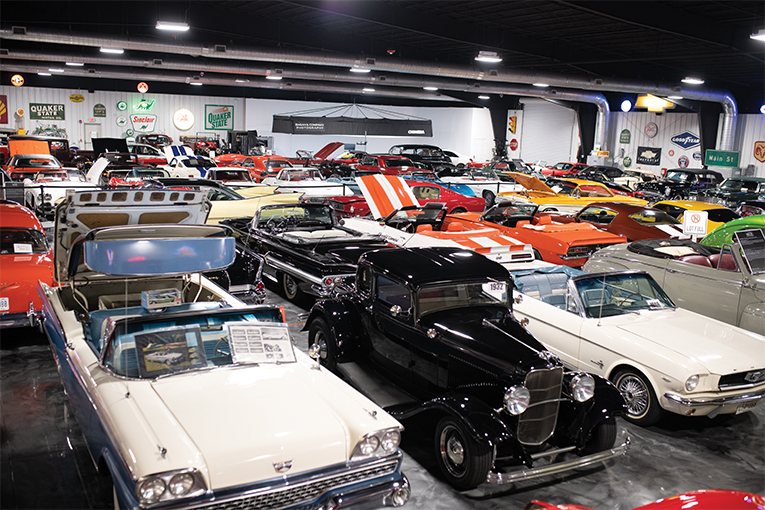 Meandering west of downtown takes you into another era, the Gilded Age (1880s-early 1900). Here Henry Flagler, perhaps the most powerful man in Florida’s history, financed the building of hotels and churches. Most noteworthy is his Hotel Ponce de León, now Flagler College. 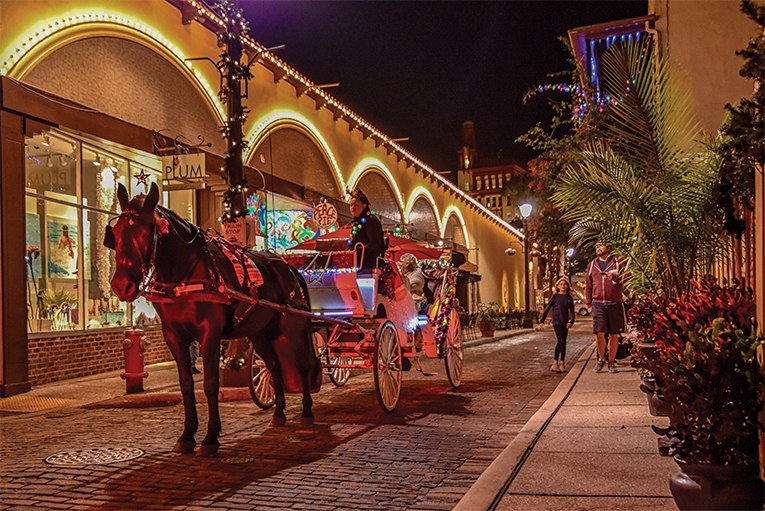 Treat yourself to a room at the brand-new Renaissance St. Augustine Historic Downtown Hotel. Its exterior has all the architectural charm of the Old City—towers, turrets and wraparound porches—but upon entering the lobby, you’re back in the 21st century with hip design elements straight out of Architectural Digest. Rooms are just as innovative with striking artwork, and balconies overlook bustling San Marco Avenue. The hotel is in Uptown, tucked between Castillo de San Marcos and Abbott Tract, a neighborhood of narrow streets and restored Queen Anne homes.

Enjoy your morning meal at Ancient City Brunch Bar. Choose from Belgian waffles, quiche, warm Brie with honey and other items to create your own “bruncharcuterie” board, designed to be shared. Mix with the locals at Carrera Wine Cellar, where over a glass of wine you get the lowdown on the city. Dinner is fresh seafood at St. Augustine Fish Camp on the San Sebastian River. Triggerfish and red snapper are always on the menu, along with oysters and grilled octopus salad.

Wrap up your road trip with a stop at the new Classic Car Museum of St. Augustine. Collector and owner Sidney Hobbs displays 110 cars, including models from every decade between 1910 and 1980. Most expensive is a 1969 Dodge Daytona that Richard Petty tested at Talladega 500, worth over $1 million. Other beauties include a black 1938 Cadillac befitting Al Capone; a pink 1957 Cadillac Eldorado Biarritz convertible, which at 19 feet and 8 inches long, would make Elvis jealous; and a batmobile (no kidding).

This article appears in the April 2022 issue of Orlando Magazine.
Categories: Local Getaways, Travel
Tags: florida travel, Road Trip, Travel
Want to read the whole issue? Download and read this issue and others on Magzter.