You might call them the class of 72: the winners of our annual Best of Orlando poll in six dozen categories.

You might call them the class of 72: the winners of our annual Best of Orlando poll in six dozen categories. Readers picked their favorites in everything from golf courses to tattoo parlors, TV news teams to theater, burgers to bloggers. So dig in! 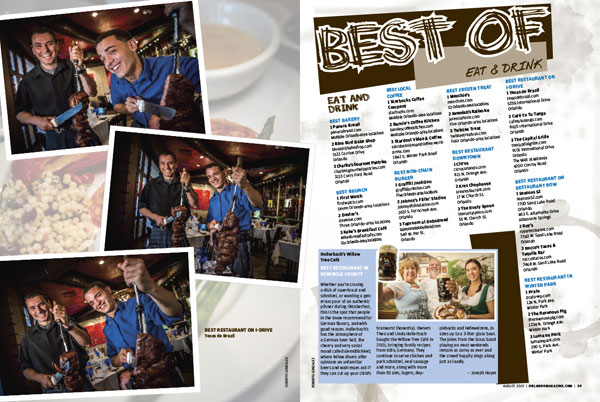 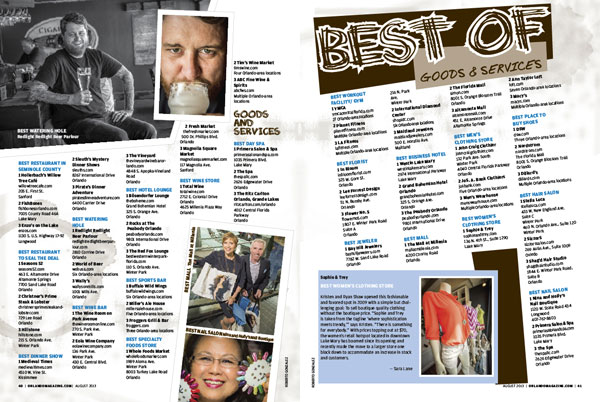 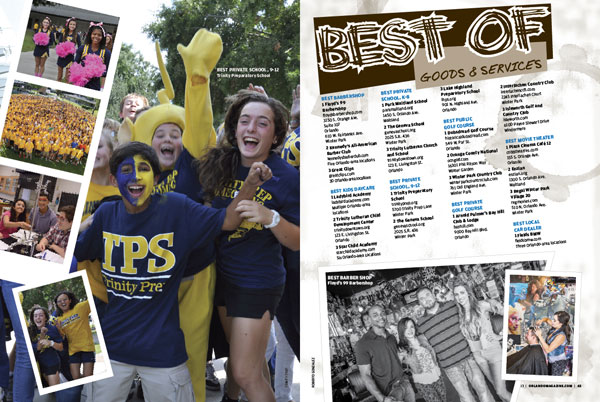 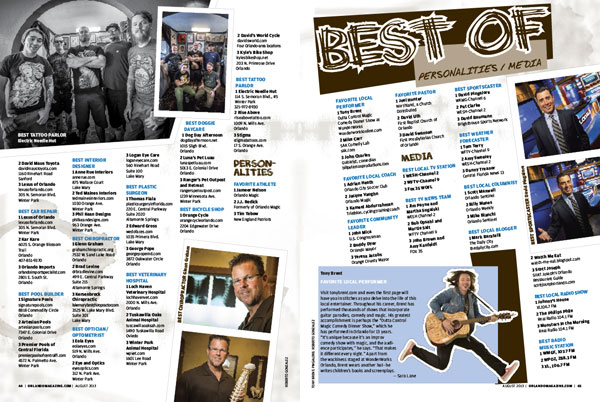 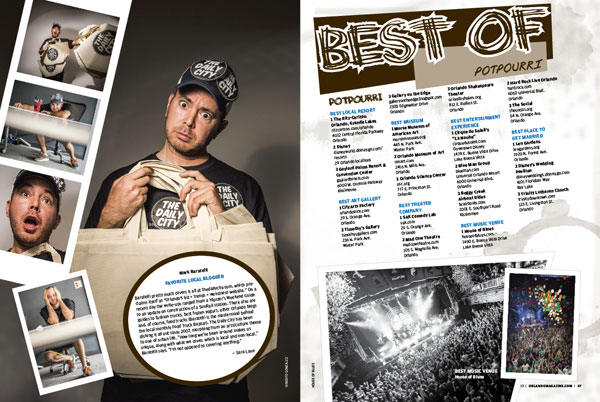 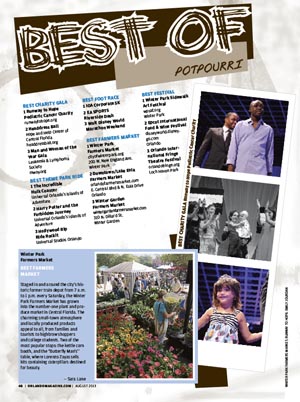 Whether you’re craving a dish of sauerkraut and schnitzel, or wanting a generous pour of an authentic pilsner during Oktoberfest, this is the spot that people in the know recommend for German flavors, and with good reason. Hollerbach’s has the atmosphere of a German beer hall, the cheery and very social mood called Gemütlichkeit, where fellow diners offer opinions on unfamiliar beers and waitresses ask if they can cut up your child’s bratwurst (honestly). Owners Theo and Linda Hollerbach bought the Willow Tree Café in 2001, bringing family recipes from Köln, Germany. They continue to serve chicken and pork schnitzel, veal sausage and more, along with more than 50 ales, lagers, dopplebocks and Hefeweizens, in sizes up to a 3-liter glass boot. The jokes from the brass band playing on most weekends remain as corny as ever and the crowd happily sings along just as loudly.

Kristin and Ryan Shaw opened this fashionable and favored spot in 2009 with a simple but challenging goal: To sell boutique quality clothing without the boutique price. “Sophie and Trey is taken from the tagline ‘where sophistication meets trendy,’” says Kristin. “There is something for everybody.” With prices topping out at $70, the women’s retail hotspot located in downtown Lake Mary has boomed since its opening and recently made the move to a larger store one block down to accommodate an increase in stock and customers.

Visit tonybrent.com and even the first page will have you in stitches as you delve into the life of this local entertainer. Throughout his career, Brent has performed thousands of shows that incorporate guitar parodies, comedy and magic. His greatest accomplishment is perhaps the “Outta Control Magic Comedy Dinner Show,” which he has performed in Orlando for 13 years. “It’s unique because it’s an improv comedy show with magic, and the audience participates,’’ he says. “That makes it different every night.” Apart from the wackiness staged at WonderWorks Orlando, Brent wears another hat—he writes children’s books and screenplays.

Baratelli pretty much covers it all at thedailycity.com, which proclaims itself as “Orlando’s biz + trends + weirdness website.’’ On a recent day the write-ups ranged from a Hipster’s Weekend Guide to an update on construction of a SunRail station. There also are guides to fashion trucks, best frozen yogurt, other Orlando blogs and, of course, food trucks (Baratelli is the mastermind behind the local monthly Food Truck Bazaar). The Daily City has been dishing it all out since 2007, morphing from an arts/culture theme to one of urban life. “How long we’ve been around makes us unique, along with what we cover, which is local and non-local,’’ Baratelli says. “I’m not opposed to covering anything.”

Staged in and around the city’s historic former train depot from 7 a.m. to 1 p.m. every Saturday, the Winter Park Farmers Market has grown into the number-one plant and produce market in Central Florida. The charming small-town atmosphere and locally produced products appeal to all, from families and tourists to highbrow shoppers and college students. Two of the most popular stops: the kettle corn booth, and the “Butterfly Man’s’’ table, where Lorenzo Zayas sells kits containing caterpillars destined for beauty.

This article appears in the August 2013 issue of Orlando Magazine.
Categories: Features