Designers are bringing luxury back to the most private room in the house.

Denise Bates Enos,
If there’s one sign that seems to indicate that the economy is improving, it’s the fact that people are once again pulling out all the stops in bathroom design. Whether it’s a new build or a remodel, homeowners want their sexy baths back, and they’re bigger and bolder than ever.

Even if the overall square footage of the average home has shrunk, bathrooms haven’t, says architect Phil Kean of Phil Kean Design Group in Winter Park. “What’s happening is that people are doing smaller homes, but the rooms they are making bigger and better are kitchens and baths.”

People are seeking an escape to a spa-like setting where they can relax, he says. “The new technology and all the new product offerings have made them so luxurious.”
The latest pampering accoutrements for the bath include multi-head steam showers, sculptural soaking tubs, and massage alcoves and salon stations for in-home therapeutic and beauty treatments. Even the humble toilet has gotten an upscale makeover, with models that boast built-in bidet functions, Blue-tooth connectivity for music, heated seats and colored light displays.

“More and more, the bathroom is becoming a place of soothing retreat,” says Lea Mendoza, senior product designer for TOTO, a manufacturer of upscale bath products. “Designers are using a variety of different methods to achieve this feeling of relaxation.” 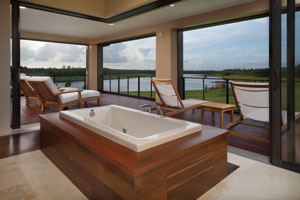 Soft Touches One way designers are creating a relaxing atmosphere in the bath is through the use of softer textures. “We’re seeing classic materials such as Carrera marble or travertine being reinterpreted with more of a matte finish for a softer look,” says interior designer Eric Horner, owner of Eric Horner Interiors in Orlando. “For years, the only option was polished. Now you can get a textured leather finish or an acid finish.”

The matte stone look is being complemented with fixtures in a range of satiny metallic finishes. “Soft golds are absolutely coming in strong,” notes Horner.
“Old is new again,” adds Kean. “Chrome and polished nickel finishes will be timeless, but we’re also seeing brushed finishes in brass and bronze.”
The shine is also off the tub, toilet and sink, says Kean. Shiny porcelain is losing ground to more muted finishes, and tubs are often freestanding.
These softer surfaces bring a more tactile, sensory feel to the bath, and there’s a practical plus to them as well: “They don’t show water spots and are easier to maintain,” he says.

Mood Lighting All three designers point to the introduction of more complex and sophisticated lighting plans as a key component of today’s luxury bath. “Lighting is a big deal,” states Kean. Adds Mendoza, “Lighting is playing a role and being divided between bright task light and softer mood lighting for unwinding in a hot bath.”

That role is critical in the bathroom, says Horner. “People are recognizing the importance of having three or four points of light in the bathroom. Functional light is important, but it starts with natural light and includes ambient and decorative lighting. Install a dimmer switch for when you want that spa feel.”

All the Trimmings It’s the finishing touches that take a bath from merely functional to flat-out fabulous. “People are using woods and teaks and porcelains and marbles and glass; anything and everything is being used in a bathroom now,” says Kean. 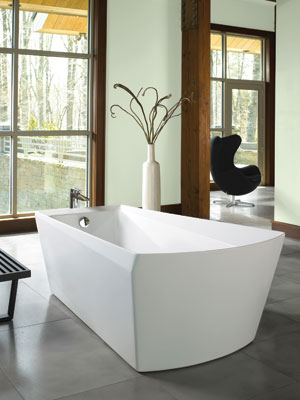 And they’re not stopping with stunning surfaces and surrounds; homeowners are adding elements that are commonly found in the more public areas of the home. Artwork, including sculpture, art glass, porcelain vases and even paintings are adorning today’s baths, says Horner. “People absolutely want to make room for an art piece; they’ll plan their bathroom to include a specific space for a featured piece of art that shows it’s a personal—and personalized—space.”

To accommodate those special pieces, designers are often called to create a special niche, alcove or feature wall—always properly lighted—to showcase the work. “It speaks to the whole sexy part of the bath—a beautifully lit vase or sculpture or oil painting really enhances the luxuriousness of it,” says Horner.

No doubt about it: sexy is back in the bath. And Kean believes it’s here to stay. “Houses have gotten smaller, but people aren’t doing the dedicated theater room; they’re making the rooms they use every day bigger and more luxurious, including baths,” he says.

“If anything, they may get even more extravagant as the economy rebounds.”

This article appears in the April 2014 issue of Orlando Home and Garden.
Categories: Home Improvement