Celebrity chef Gordon Ramsay brings flavors of the UK to a new dining experience on I Drive this month. 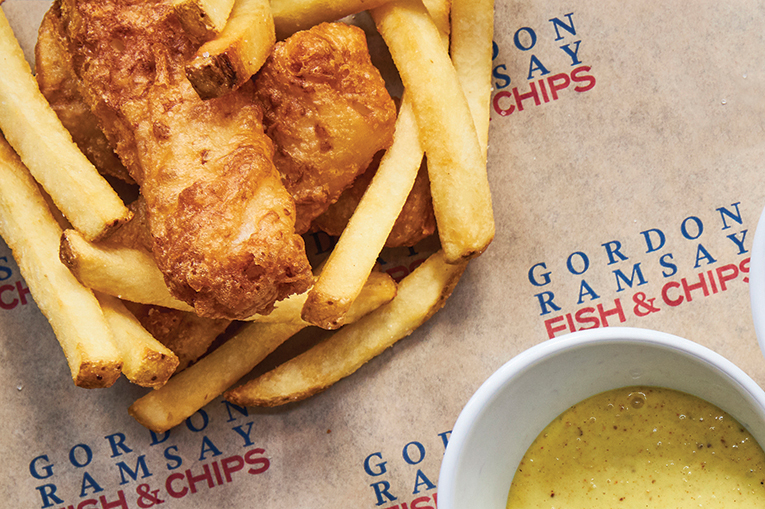 Here’s a new restaurant to get fired up about: Gordon Ramsay Fish & Chips opened at ICON Park on August 9. The first location of the eatery outside of Las Vegas, expect colorful surroundings (worthy of the outspoken chef, famous for his Hell’s Kitchen series, among other shows), over-the-top shakes and the signature item that Ramsay himself calls “the most exquisite fish and chips.”

“It was a real tradition for me growing up, so I’m excited to bring that nostalgia from my youth to Orlando,” Ramsay adds.

The 30-seat restaurant is adorned with brilliant red and blue hues reminiscent of the Union Jack, complemented by white subway tiles and industrial hardware. An iconic red telephone box sits at its entrance. The patio overlooks ICON Park’s observation wheel, fountains and lawn.

Inside, you won’t find any ordinary fish & chips. The first thing that sets a meal here apart is the commitment to sustainability. Only responsibly-sourced cod is used, and is  coated in a custard-powder batter for the perfect golden, crisp texture. Your chips can be served up one of four ways, which include natural with sea salt; “dirty” with truffle, parmesan and chives; chipotle, jalapeno and crisp chorizo; or bacon, cheddar cheese, green onions and sour cream.

Need a cool down from the summer heat? Don’t worry, Ramsay’s decadent shakes will soothe all that ails you, and you don’t even have to scream for them. Try a Biscoff shake, or his signature dessert in a cup, the Sticky Toffee Pudding shake. For those who want something harder, domestic and imported beers are available. gordonramsayrestaurants.com/gordon-ramsay-fish-and-chips

This article appears in the August 2021 issue of Orlando Magazine.
Categories: Arts and Events
Tags: gordon ramsay, Gordon Ramsay Fish & Chips, ICON Park
Want to read the whole issue? Download and read this issue and others on Magzter.