Discretion is the key to being a good butler—and Debi Pappas is more than happy to teach you the trade.

Christopher Balogh,
It’s a profession pursued by those looking for a second and third career, though young people also give it a try. Their backgrounds are all over the map—some candidates have worked in the hotel and resort industry, while others are former military. Still others are fresh to the experience. One common characteristic they all must have, however: a dedication to confidentiality.

Welcome to the world of the 21st century butler.

Central Florida is one of their training grounds, home to the American Butler School, where students learn everything from table service to the art of invisibility. The school is run by its founder, Debi Pappas, who is essentially the dean, a headmaster.

Pappas is a formal woman, one who clearly chooses her words, like a witness on the stand. The butler profession is no stereotypical joke; it’s not about dusting lamps and serving tiny hors d’oeuvres to monocle-wearing guests. It’s about a dedication to the “principals,’’ a term used for a butler’s clientele.

“Butlers in the 1800s were born into this profession,” Pappas says. “If your parents were in the position, you were going to be, too.’’

However, the job is no longer generational. It’s not easy to know or spot a butler. Today they are a secret society of servants—still wearing tuxedos with tails—forbidden from revealing their employers. The media portrayal, mainly in films such as The Remains of the Day, Batman, and most recently Lee Daniels’ The Butler, accurately depicts the true responsibilities of an in-the-flesh butler, although these days, some do wear informal attire such as khakis and button-downs, depending on the occasion. Using technology, though, has been at the forefront of the biggest change in butlers’ tasks.

“They need to be able to use smartphones, and know the latest alarm and entertainment systems,” Pappas says. “Many principals use their phones for communication, through email and texting.”

But some things don’t change. “To this day, it takes impeccable standards, background and discretion” to be a butler, she says.
*****
Pappas is more than familiar with discretion in the workplace—not only as a trained butler herself, but working for a major defense contractor. The discovery of her newfound opportunity for business and education didn’t happen in a predictable way, like being raised by an admirable Mary Poppins doppelganger. Instead it was the time she spent in the sandbox. 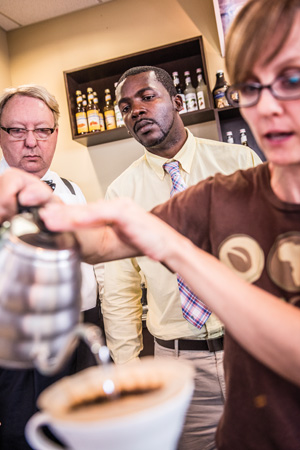 Pappas spent time flying in Black Hawks over Fallujah and Baghdad before serving the elite. She worked in Iraq from 2005 to 2009 as a deputy program manager to train Iraqi Nationals on civilian policing—an advanced boot camp. With her team, she trained nearly 5,000 police officers during her time in places like Sadr City.

While staying in Kuwait, she had a butler herself, who was her driver, scheduler and shopper. That’s when the lightbulb came on.
“Butlers made my life better,” Pappas says. “I was interested in the background of what it takes to become a butler, so I set out to learn more about it.”

After her defense work ended, she earned a butler and house management certification in Australia. She then worked for the governor  general of Australia, serving elite individuals like Prince Charles.

Returning to the states, Pappas saw a need for butlers and similar services, such as cleaning. Along with investors, she formed a “butlers-on-call’’ company called White Glove Services and began winning bids for jobs ranging from government facilities to 50,000 square-foot estates. Out of that business was born the American Butler School. The school had its headquarters in the antebellum-looking Britt mansion in Winter Garden until a couple of months ago, when Pappas moved the operation to Winter Haven.

ABS offers comprehensive training programs, handled in a familiar academia approach. There are levels of being a butler, similar to classes leading to a major at a university.

The UnderButler program is like an internship, where students learn basic skills like housekeeping, food and beverage service and knowledge, home management, introductory skills in budgeting and cash flow, special event planning, and effective VIP communication.

The Butler program offers what is essentially an undergraduate degree, where intermediate training is given in resource management, special event execution, contract negotiation, social and business protocols, introduction to the appreciation of fine food/wine/liquors/cigars, and advanced VIP communication.

And like most students who don’t want to venture off into the real world just yet, there is the PhD of butlers—the Estate Manager. Students learn advanced training in budgeting, cash flow, human resources management, travel planning and execution, fine art and antiques, and working with service professionals.

“We get all walks of life, from all around the globe,” Pappas says. “We had an economist take our classes. We had students from Turks and Caicos to Hawaii.”

The students gain a multitude of Alfred Pennyworth knowledge. Butlers must learn effective communication because most of the clients are high net worth, speak in short sentences and have short attention spans. But teaching the art of invisibility is the spine of the program: Students are taught how to not be invasive while around their principals. This particular instruction, which sounds like ninja-servantry, can entail how to open doors to rolling your shoes when walking so as not to be detected.

There are also hands-on classes. On a recent weekday, three students joined Pappas for a training session in downtown Winter Garden. First stop was Seeds Natural Market, where owner Sharon Williams spoke to the group about eating healthy, processing raw foods, and spring water vs. a reverse osmosis filter for the home. Then the group strolled to Axum Coffee, where manager Suzanne Bernal educated them in the intricacies of different coffees, explained how to source and store the beans, and showed them how to make espresso and lattes.

The butler training “is a marvelous experience,’’ says student Owen Braithwaite, who took many notes during the sessions. Braithwaite worked for 10 years in hospitality at Antigua’s Jumby Bay Resort. “In Antigua, hospitality is our backbone. My goal was to be an entrepreneur. After a few years in my own business, I realized that being a butler is a business of its own and that’s when I decided to attend the school to get hands-on experience.’’
Upon graduation, the school helps students with job placement. There are two main options to begin a career as a butler: residential or resorts. Residential butlers who pursue jobs in Orlando serve the mega-rich. Typically, the principals have some special requests.

“We have been requested to clean all intricate areas—we had to use small brushes to dust around cables behind entertainment centers,” Pappas says.

Then there’s the concept of Madame intervene. Law enforcement and soldiers use code words. So do butlers. Madame intervene is a term to explain why certain tasks may not have been done based on first requests—i.e. a wife tells the butler to do something different than what the husband originally requested.
*****
We all want to know who is behind the hiring of butlers. Is it Sir Paul? Magic players? Carrot Top? We will never know. Pappas says all of White Glove Service’s butlers sign a non-disclosure agreement, but she can give a tidbit.

“One thing that most people don’t know about the elite,” she says, “is that they hardly ever pack their own suitcases. That is something we teach at the school.”

Butlers get paid so well that college graduates might want to reconsider that barista job. Pappas says that in the residential arena, a butler starting out in a 5,000 square-foot-home can earn $55,000 a year. Once established, they can earn up to $175,000 for taking care of multiple homes.
The resort side tends to deal with high-end hotels. The American Butler School assisted the Waldorf Astoria Orlando with its VIP Services program. In 2012, the hotel decided to offer a butler service to its exclusive guests, a program that David Kasprzak, VIP Services manager, built from the ground up. He is also a former student of the ABS.

“We needed to cultivate a program to train our current staff to become butlers when requested,” Kasprzak says. “The new program needed introduction from A-Z in being a butler.”

Kasprzak and his team “hit the books” and attended one of the seminars at the school. They learned what guests expect of a butler and, of course, they learned how to be invisible.

“We learned clothing pressing, suitcase unpacking and shining shoes to expand our repertoire,” he says.
The butlers at the Waldorf have a bit of a relay marathon at times, passing from shift to shift.

“One of our guests was here for a month,” Kasprzak says. “Our butlers were on for 16 hours a day, changing out every eight hours.”

With so much time spent with clients, whether in a house or a resort, butlers can be considered personal friends, even parents.
“I have known butlers who have walked down the aisle with their principals’ daughters,” Pappas says. “At the school, we teach them how to be professional, but some can turn out to be a part of the family.”

This article appears in the November 2013 issue of Orlando Magazine.
Categories: Features