Arts Season Preview 2020: The Show Will Go On

Central Florida arts organizations are finding ways to pull through the pandemic to deliver a season full of promise. 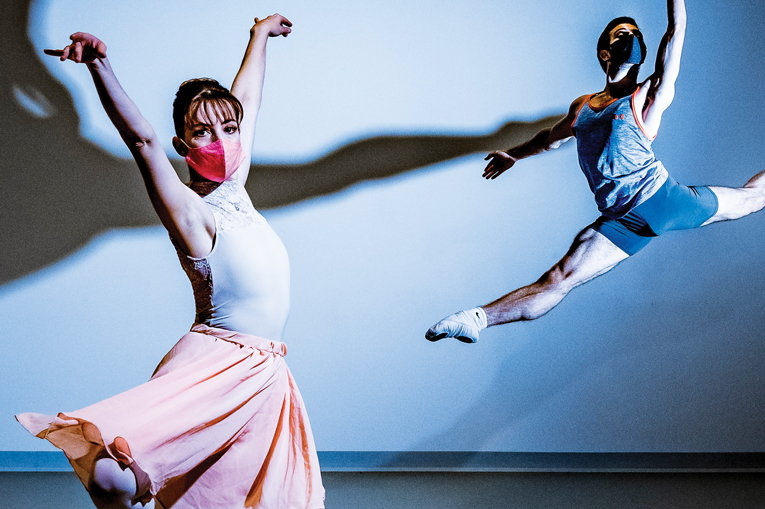 This much Robert Hill can count on: The prince will show up. The Tchaikovsky score will swell as he awakens the bewitched princess with a kiss. Other than that, things could get a little sketchy.

Hill is artistic director of Orlando Ballet and the choreographer of its first show of the 2020-2021 season, The Sleeping Beauty, which will open at the Dr. Phillips Center for the Performing Arts on October 23. Or not.

The company is scheduled to perform the ballet in the Walt Disney Theater, with an array of safety measures in place: temperature checks at the door, masks all around, and attendance limited to half the theater’s capacity. Fingers crossed that nobody turns up with a tickle in their throat.

But what if the coronavirus pandemic becomes worse?

He’s not the only one.

In a battle with nothing short of survival at stake for companies, players and patrons, Central Florida’s performing arts organizations are up against an unpredictable foe. Hence, Hill’s Sleeping Beauty, Plan B. It would involve relocating the show to the company’s new ballet center, staging more performances for smaller audiences, and even changing the choreography, paring the show down into a simpler work with two revolving casts to keep the dancers farther apart.

Multiply the potential complications involved with that one company and that single show, and you have a sense of the challenge. But bear in mind that in the arts, hard times and improvisation go hand in hand. Which may explain why Hill—who found himself working out of his car seven years ago when a lethal mold was discovered in his company’s old studio—sounded positively cheery as he worked his way through alphabetical options. And why Orlando Shakes Artistic Director Jim Helsinger sounds equally chipper.

But then, Helsinger has historical precedent and a fairly decent role model.

“Overcoming obstacles is nothing new in the theater,” he says. “When the plague hit England, they shut down the Globe [Theatre], and Shakespeare went off and wrote King Lear.” 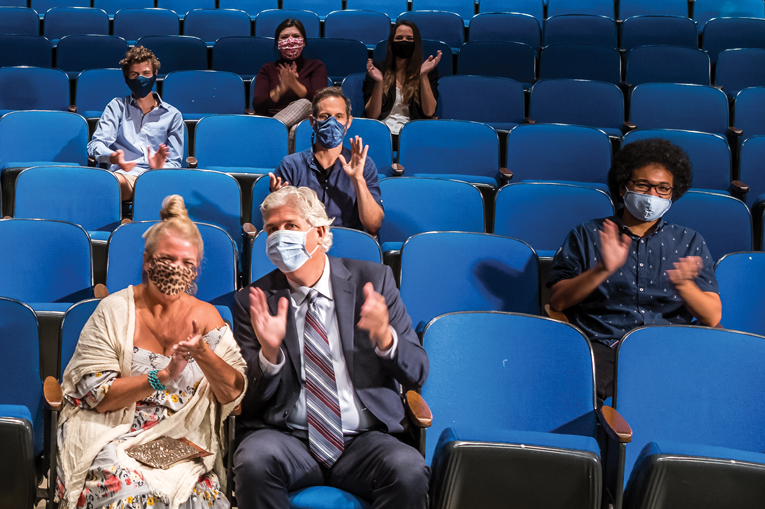 Photo illustrations taken in the auditorium and galleries of the Orlando Museum of Art. (ROBERTO GONZALEZ)

When a plague hit Orlando, Helsinger and his staff had more pragmatic issues.

They purchased two electrostatic foggers—not to lend atmosphere to the theater but to disinfect it. They designed a social-distance seating arrangement: two empty seats behind, in front, and on either side. They consulted with infectious disease experts at AdventHealth and sent out a questionnaire soliciting concerns from ticket holders. Helsinger took heart from a loyal couple who wrote to say they’d sit out the season but donate the price of their season tickets.

There’s no substitute for the communal arcs that can crackle between performers and a live audience. But there’s no shame in a virtual surrogate. Call it, the show must go online.

The Shakes has posted showstoppers and solos from previous productions on its Facebook page and plans to conduct virtual auditions for the coming season instead of making its annual foray to New York City for casting calls.

The Orlando Museum of Art is offering online tours of its exhibits and videotaped interviews with the artists whose works were to be featured in last spring’s postponed Florida Prize in Contemporary Art exhibit.

Opera Orlando, which ordinarily travels from one Orange County high school to another to stage annual audition tutorials for hopeful vocalists, created a single, online event instead.

Central Florida Community Arts, an eight-year-old nonprofit that provides lessons and performance opportunities for amateurs, initiated a virtual, pay-per-view cabaret series, with half the profits going to the performers.

But of all the Central Florida companies trying to adapt and survive in a COVID-19 world, the trickiest transition fell to the most venerable.

The Bach Festival Society of Winter Park choir has been a Central Florida institution for 85 years. Its corps of volunteers includes singers who have been with the choir for decades. The season’s highlight is its annual Bach Festival on the Rollins College campus, which features an array of classical works including selections from its namesake.

Johann Sebastian Bach’s goal as a composer was to evoke the presence of God. Athalia Cope, who has sung in the Winter Park choir for 59 years, compares the Baroque master to an artisan blending consummate craftsmanship with a priceless matrix: “The way he combines and weaves the lines together—it’s like braiding something made of gold.” 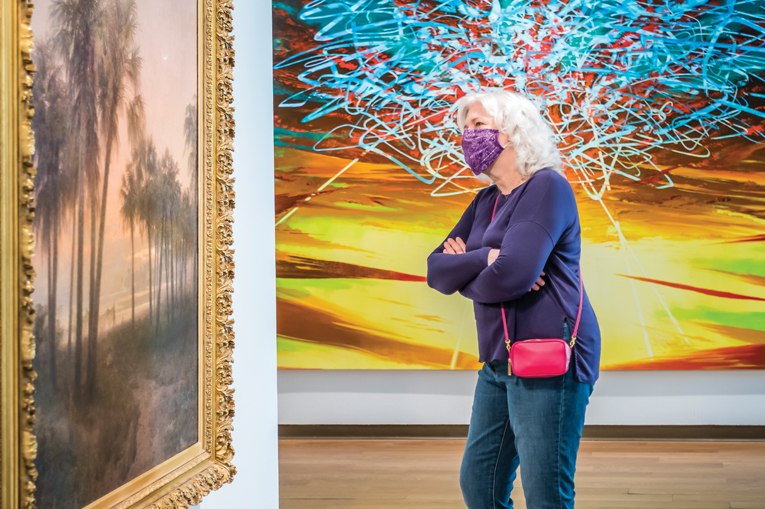 Photo illustrations taken in the auditorium and galleries of the Orlando Museum of Art. (ROBERTO GONZALEZ)

Few would deny the power of 180 passionate souls projecting every vowel and consonant to make Knowles Chapel resonate with some of the Western world’s most revered compositions. For classical music lovers, it’s a dream. For infectious disease specialists, it’s a nightmare.

Scores of singers mightily enunciating in an enclosed space is an ideal setting for a so-called super-spreader event, such as a Washington state choir practice that infected 52 people with the coronavirus.

Stories like that are the reason studies are underway about the volume and range of droplets and finer aerosol mists that singers emit—and why the artistic director and conductor of the Bach choir has spent a summer of sleepless nights.

“I lie in bed at night thinking about it,” says John Sinclair. “I have programmed and re-programmed this season in my head a dozen times over.”

Beverly Slaughter, a soprano who has sung in the orchestra for 45 years, says, “We want to sing. We love the music. But let’s face it: We’re a Petri dish.”

Sinclair consulted with an array of medical professionals—several of them choir members—and designed a tentative season that will entail online concerts and rehearsals, outdoor performances featuring singers who’ll wear masks and be distanced from each other instead of standing shoulder to shoulder, and music made for smaller choral groups. He’d restrict the number of audience members at any performance at Knowles Chapel from the usual crowd of hundreds to just 50, and stream the concert online.

It would have been simpler to cancel the season or put everything online. But Sinclair is not that kind of person. The choir, like every other arts organization in town, needs to perform in order to survive; and you can set aside whatever frilly preconceptions you might have about classical music and those who perform it.

“The bond that we have—it’s hard to describe,” says choir member Jodi Tassos. “When you sing with a large group, you are creating something bigger than any single one of you.”

We need art, and artists need art. Art, said Picasso, “washes away from the soul the dust of everyday life.”

Tassos directs a smaller Bach Society offshoot: the Young at Heart Chorale, a group of amateur singers, 55 and over. Recently, after telling them that for safety’s sake they wouldn’t be singing together for some time, she gave them a piece of advice you may find useful yourself these days, whether or not you can carry a tune in a bucket.

“I tell them to keep on singing,” she says, “even if it’s only to yourself.”

This article appears in the September 2020 issue of Orlando Magazine.
Tags: arts, go on, mcleod, Michael McLeod, preview, season, show, the show will go on
Want to read the whole issue? Download and read this issue and others on Magzter.

Entertainment: The Holiday Season in Florida Warms the Heart