The custodian of one of the greatest herds of horses on earth opens his farm to visitors, offering a one-of-a-kind bonding experience.

Seventy-two hooves pound the turf as moms and babes fly across a pasture en masse—a hint of the  athleticism for which Al-Marah Arabian horses are bred. If you are lucky enough to witness this thundering sound, it will forever lodge in your soul.

This is no regular farm and these aren’t just pretty horses. They are a story. Few people know that just 30 miles west of Orlando in Clermont is one of the most important herds of Arabian horses in the world, its bloodline reaching back a thousand years to the fearless, loyal warhorses of the Bedouin tribes of the Sahara. It has been in the custody of only three families since it was gathered by Egyptian ruler Abbas Pasha in 1815, bought in the late 1870s by an adventurous English couple who rode into the desert with saddlebags full of gold, and finally imported to the United States in 1957. For the past 200 years, only six individuals have held the title “keeper of the herd.’’ The current one is Mark Miller. 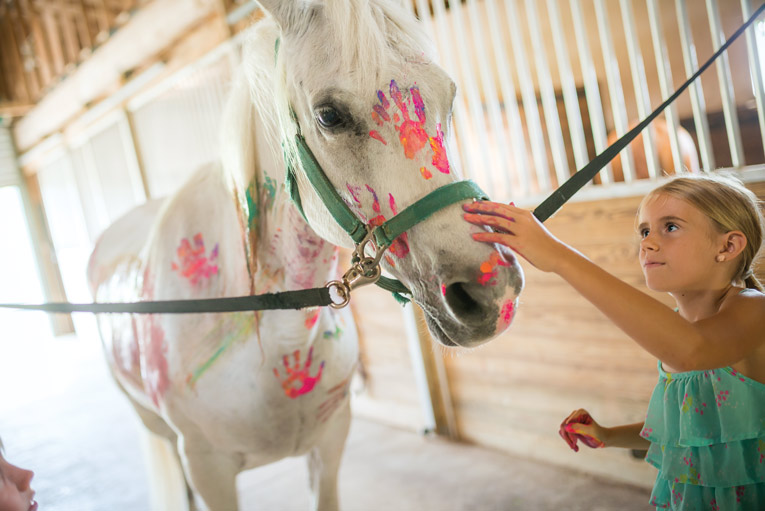 Miller picked up the reins from his mother, Ruth “Bazy” Tankersley, who died just short of her 92nd birthday in 2013. Bazy had been breeding Arabians for nearly two decades when she imported the Al-Marah herd directly from the legendary Crabbet Arabian Stud breeding farm in England in 1957. During her career, Bazy registered some 2,800 foals, becoming the foremost breeder of purebred Arabian horses in the United States. “When she died,” says Miller, “people thought Al-Marah would go out of business.”

Instead, Miller, now 68, chose to step into the role he’d been groomed for. Which meant closing his longtime Arabian Nights dinner show in Kissimmee that had entertained some 10 million people over its 26-year run. “When my mom died, I knew I did not want to let the herd go. I had to make a decision and I chose the farm. They are my family.”

A longtime Osceola County resident (and 1970 Rollins College grad), Miller set out to find a farm in Central Florida where he could move the herd from Bazy’s Tucson, Arizona, base. “Horses deserve a beautiful farm. When we found this place, I couldn’t believe it,” Miller says as he watches head trainer Kassie Barteau at work on Al-Marah Prince John++++//, a dappled 8-year-old Arabian gelding who holds the title of Legion of Masters and Excellence. Indicated by the four plus signs and two slashes, it is the highest rating by the Arabian Horse Association and one bestowed on only 80 horses—ever. Al-Marah has bred 18 of those, with 11 currently living on the farm—part of the 65 heads in residence (another 30 live freely on a huge ranch in northern Arizona). 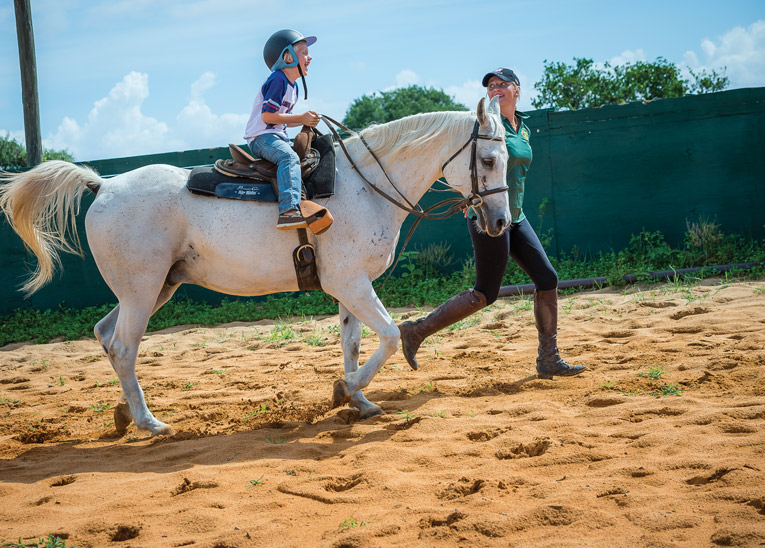 Miles rides under the supervision of trainer Kassie Barteau.

Barteau, 26, is the stepdaughter of a great trainer from Chicago, says Miller. “The day she accepted my job offer was a wonderful day for our farm. If she doesn’t think a horse is capable of doing something that I do, she’ll try 100 percent as though it’s her own horse.” It’s easy to spot the mutual affection. Says Barteau about her boss: “Mark’s a great visionary and keeps all of us motivated. But mostly, I work for him because he is a very good-hearted, respectable man.”

Whether in the landmark mustard-yellow barn trimmed in forest green (Al-Marah’s traditional colors), or in one of the many pastures or training rings perpetually cooled by breezes off the two lakes that bookend the 80 acres, the Al-Marah farm quietly buzzes with trainers, instructors, riders, stable hands, veterinarians, a farrier, and a farm manager whose role is like a parent to 70-some kids. Together, this team has helped Al-Marah horses win 41 National Championships at the four national Arabian and Half-Arabian competitions staged by the Arabian Horse Association in the last two years. Al-Marah horses compete in English and Western riding, endurance racing (up to 100 miles), and “In Hand” classes where judges evaluate an Arabian’s structure and disposition.

At its core, Al-Marah is a breeding farm. “One of the reasons we tried so hard to keep this herd together is because it is so valuable. They are a source herd,’’ says Miller, “If we give that up, it will never exist again. We breed these horses the way they’ve been bred for 200 years to prove to ourselves that we are still creating the best athletes in the world.” 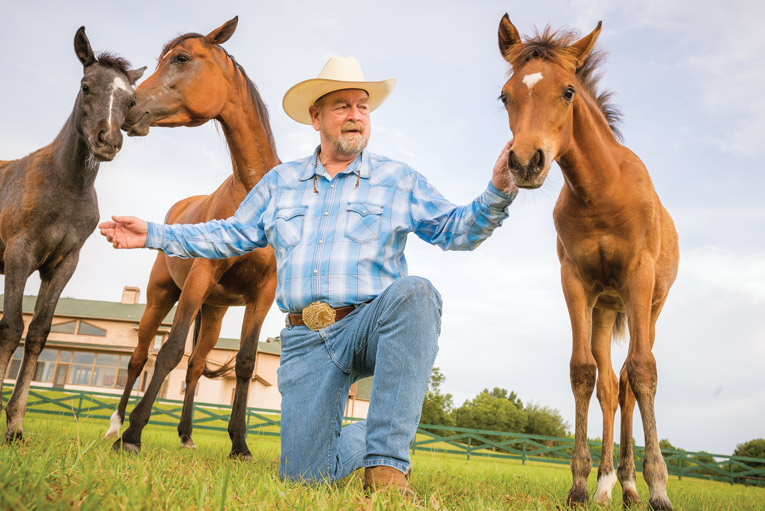 Mark Miller closed his Arabian Nights dinner show so he could watch over the Al-Marah herd. “I had to make a decision and I chose the farm. They are my family,” he says.

Being able to run a hundred-mile race and place in the top 10 is one of three main criteria that define a classic desert horse, explains Miller. It must also be beautiful and have the disposition to be able to sleep in your tent during a sandstorm. Since he’s never had to do that, Miller demonstrates the calm disposition of his Al-Marah Arabians by standing directly behind the stallion Al-Marah Swift++++//, the winningest horse in the history of the farm, and pulls his tail. Swift doesn’t even flick his mane. In fact, he seems to like it. “He’s everything you could want in life,” says Miller, whose affection for his horses is as vast as the desert from which they come. “To be able to be up close and personal with this kind of special horse is unique. We have horses that are charismatic, with energy and ability and great training, but that are also safe for children.”

About a year ago, Miller decided to open Al-Marah to visitors. “I am the custodian of the greatest band of horses that ever lived on earth, and it’s part of my mission to share them with the public. You get to have an interaction with a horse to understand what they are about, not just what they can do, but who they are.”

No two Interactive Horse Experience tours are exactly alike. Each is built from the same components such as touring the farm, washing and grooming a horse, meet-and-greets with the barn’s stars, a riding lesson and a chance to watch the magic between a trainer and a horse as they perform some spectacular tricks. But your guide, always one of the farm’s professionals, will tailor your time to the interests of the group. For instance, younger kids may want to spend more time painting a horse, while others may prefer longer in the riding ring. The experience is known to settle the nerves of grownups who think they are afraid of horses.

Recently, Erin West of DeLand brought her kids for the Interactive Horse Experience. She wanted to give daughter Harper, 10, and son Miles, 8, an introduction to the animals they’d always loved from literature. “They’ve read every Walter Farley book,” says West, referring to The Black Stallion author. Little did she know that Miller grew up with the Farleys as close family friends and co-founded the national Horse Tales Literacy Program with Farley’s son, Tim. 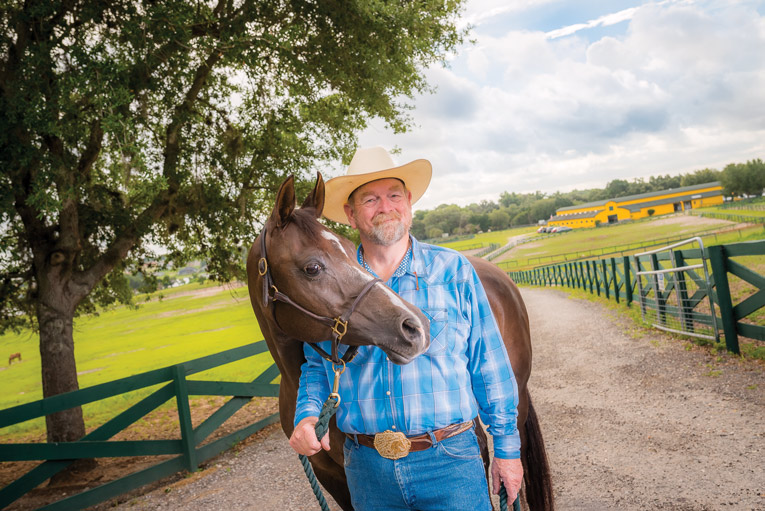 Miller with one of his close friends

Al-Marah Clems Dreamon, a white 23-year-old gelding whose docility belies his alter-ego as the UCF Knights mascot Pegasus, stands at attention as Miles and Harper get acquainted, eye-to-nostril with the horse, hands stroking Clemmy’s regal cheek. Clemmy watches Miles intently as the boy blows gently in his nose. “In that moment,” says Miller, “Clemmy learns so much about Miles. We only breed horses that have this great ability to interact in a meaningful way with the rider. It’s a special thing.”

The siblings are offered plates of bright orange, green and fuchsia washable paint and an invitation to turn Clemmy into a canvas of their own creation. Hesitant at first—because, really, who has ever painted a horse?—the brother and sister divide and conquer, each taking a side of the patient horse. The benefits of the exercise soon become obvious: It gives the kids all the time they need to have their hands on the horse, getting to know him, and he them.

Later, the entire family takes turns mounted on Kismet to receive a real riding lesson in the ring with Barteau. “Mommy, you have a fan,” says Miles, pointing to a curious chestnut mare watching from a side gate as the family bonds, cheering each other on, all eyes on the rider in the ring. After the lesson, Harper helps Barteau wash and groom Clemmy with the single-mindedness of a young girl with her horse.

Finally the family is escorted into the broodmare pasture, lined by cypress trees and sharing a border with placid Lake Nellie. At first they stay seated in the golf cart, and in short order the curiosity of the nine pairs of mares and foals leads the horses right to the cart, noses poking in (hoping for treats?). Soon, everyone is invited to step out, to walk among these treasures, palms out for gentle introductions. The youngest is Depth Charge, all legs with white stockings and a white blaze painted down his chestnut face, never far from his mother, Mariana.

It’s one more magical experience, in a day full of them.

“Standing in an open field with the new foals was truly a bucket-list item,’’ West says.

“To have all these gorgeous babies walk right up to us to be petted and loved on? That is every little girl’s dream right there.”

Al-Marah Arabian Horse Farm is just south of Clermont, near the western shore of Lake Louisa. There are two ways to visit the farm. The VIP Barn Tour is a one-hour guided tour of the entire farm on a golf cart, finishing with a meet-and-greet of the barn’s stars ($20). The Interactive Horse Experience offers an in-depth three-hour opportunity to really get to know a horse and includes a riding lesson. ($195 for the first participant, $95 for each additional participant, free for observers). The farm is open 9 a.m.-4 p.m. daily, and reservations are required. For details, go to al-marah.com