Site Staff,
Q: Can you lose your mind in a corn maze?
A: For Answer Man, the word “maze’’ has always brought to mind Jack Nicholson stumbling around with a fire axe in The Shining. Of course, Jack was in a snowy hedge maze at night in subfreezing temps and was a bit, um, unbalanced.
Corn mazes, on the other hand, are fun. Scott’s Maze Adventures, part of the family-run Long & Scott Farms in Mount Dora, devotes seven acres to its agri-puzzle annually. And, yes, you will eventually find your way out of the 6-to-12-foot stalks by 1) using clues on a game sheet 2) ascending one of several towers to get your bearings 3) relying on people smarter than you, or 4) holding up a tall flag in surrender and waiting for help.
Nobody navigating Scott’s maze has ever called 911 to be rescued, as a couple with a newborn did last year at a maze in Massachusetts. If you follow the game sheet and stop at every station, the trek takes 60 to 90 minutes, says maze manager Rebecca Scott Ryan. The theme changes every year—designers in Pennsylvania map out the maze on a computer, then help cut it into shape with a tractor and rototiller.
Some kernels of trivia: The maze is planted with field corn, not the tastier sweet corn, and eventually is harvested to feed farm animals. Also, here’s the ultimate secret for getting out if all else fails: Follow the left wall of corn and always turn left at an intersection. Or follow the right edge and always turn right. Problem is, you just might end up back at the entrance. And what fun would that be?
Q: Did The Beatles really break up at Disney’s Polynesian Resort?
A: 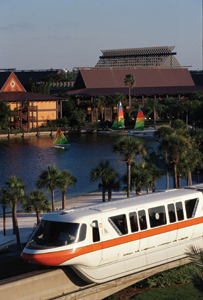 Technically, yes. It was back in the days when you still needed a ticket book to ride—December 29, 1974, to be exact. The Fab Four hadn’t played together for several years, but the breakup wasn’t official until John Lennon signed a legal document brought to him by a lawyer while Lennon vacationed at Disney. May Pang, Lennon’s companion at the time, related the moment in her 2008 book, Instamatic Karma: “He finally picked up his pen and, in the unlikely backdrop of the Polynesian Village Hotel at Disney World, ended the greatest rock ’n’ roll band in history by simply scrawling ‘John Lennon’ at the bottom of the page.’’
Nobody remembers which room Lennon was staying in when he signed the paper, but it still exists. That’s because although the Polynesian Resort has grown from the 636 rooms it had 38 years ago to the current 847, none have been removed during renovations, Disney officials say. So every day, somebody has a brush with history—and doesn’t even know it.
Answer Man welcomes your questions about the Orlando area. Send queries to answerman@orlandomagazine.com
This article appears in the November 2012 issue of Orlando Magazine.
Categories: Community