Tradition on a Grand Scale

Q: Why does every Publix have an old-fashioned weight scale just inside the entrance?

A: Answer Man has always found the placement of the scale peculiar. Is Publix trying to send a subliminal message that we should shop healthier, choosing the lemon pepper chicken over fried nuggets, the Royal Gala apples over the double-stuffed Oreos? And is the supermarket giant intentionally setting the stage for potential meltdowns in the entryway, as family members gasp in horror when Dad weighs himself?

The scales were around long before we became an obese nation. A Publix spokesman tells us that when the chain’s founder, George W. Jenkins, opened his first store in Winter Haven in 1930, he included a free scale simply as a public service. Customers liked that—normally they had to pay a penny to weigh themselves in other stores—so the scale became a tradition. Today, all of the nearly 1,100 Publix supermarkets in the country have them.

In the last few years, the scales have gained a new group of fans: air travelers, who weigh their luggage before leaving for the airport so
they can avoid paying for overweight bags. 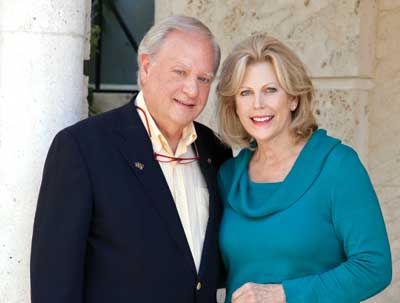 Tony and Sonja Nicholson are big names in philanthropy, particularly at UCF.

Q: For whom is UCF’s Nicholson School of Communication named?

A: Winter Park entrepreneur Tony Nicholson and his wife, Sonja, are the honorees and with good reason—in 2005, they gave $2 million toward construction of the school’s new building. They also gave $2 million to build an indoor practice facility for athletes at UCF, appropriately named the Nicholson Fieldhouse.

Tony Nicholson, 73, is board chairman of the Nicholson Center and on the board of the UCF Foundation. A Central Florida resident since 1967, he has been involved in home building (through Nicholson Homes), real estate, publishing and telecommunications, to name a few areas. Asked to sum up his philosophy of philanthrophy, he replies: “Giving back to our community. I made a lot of money with Nicholson Homes, sold a lot of houses, developed a lot of land. I was committed to give back, and I did.”

This article appears in the January 2012 issue of Orlando Magazine.
Categories: Community