Three years ago, Pastor Henry answered the call to return to his old pulpit and guide a struggling congregation. He has served them well.

As the choir sings “A Mighty Fortress Is Our God,” Jim Henry sweeps into Downtown Baptist Church’s sanctuary from a doorway flanking the pulpit and heads for a seat in the front pew. Nearing 80, the pastor is still trim and energetic, dressed in a gray sport jacket and a white shirt, open at the collar. When he ascends to the translucent lectern at center stage, he is confident, seasoned and folksy.

For Henry, preaching at Downtown Baptist is a poignant and uplifting example of “what goes around, comes around.”

From the age of 39 to 68, he helped grow First Baptist of Orlando, then at the East Pine Street location, to become an emerging downtown megachurch. Then, in 1985, he moved the congregation out of town, to a 156-acre campus at Interstate 4 and John Young Parkway. The old, red brick campus left behind became Downtown Baptist Church. First Baptist thrived in its new location, growing to more than 13,000 members before Henry retired in 2006.

On this drizzly Sunday, the choir of about 30 at Downtown Baptist is a far cry from First Baptist’s 200-member ensemble, and the drop-down screen above the singers would be dwarfed by First Baptist’s fabled Jumbotron. Still, the crowd of about 350 nestles comfortably in the sanctuary. There is a sprinkling of younger worshipers in the pews, but most are over 50, and there are more than half a dozen walkers for the disabled in the aisles. 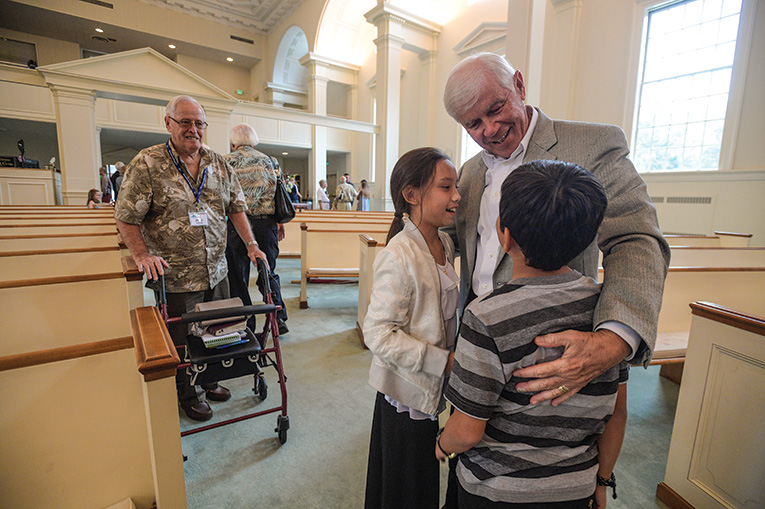 Henry greets worshipers after a service. Until 1985 the sanctuary belonged to First Baptist Church  of Orlando (PHELAN EBANHACK)

After he left First Baptist, Henry’s plan was to live part of the year in the North Carolina mountains, and to take occasional fill-in posts, using nearby airports. But all that changed when his wife, Jeannette, was diagnosed with Alzheimer’s. The couple sold their mountain place so she could remain in the familiar surroundings of their Orlando home, and her husband could help care for her. Since his first retirement, Henry has kept busy as a kind of denominational fireman, serving as interim pastor of several Central Florida area congregations, like First Baptist of Ocala, which have been battered by crisis and upheaval.

Yet, it came as a surprise when, in 2014, leaders of Downtown Baptist, whose membership had shrunk from 600-700 members down to 70, with just one Sunday service and one Sunday school class, asked if Henry would consider taking over his old pulpit. “In my wildest dreams I wouldn’t have thought I would be back,” he says.

Ironically, when the call came, Henry had recently spoken to several church revitalization conferences, one called “Fanning the Flames of Christian Leadership.”

But he was concerned that there might be some residual ill will among those who years ago opposed the move to First Baptist’s suburban campus for a variety of reasons, including the financial settlement: At the time of the split, the members who stayed on Pine Street had to buy the buildings, which many had helped to build in the first place. However, the congregation was now desperate, and few of those who had bad feelings were still around to object.

So Henry agreed to return, seeing in the call “the providential hand of God, because it allowed me to be at home with my wife, who has memory loss, instead of being on the road with ministry responsibilities in other places.”

David Uth, Henry’s successor at First Baptist and still that congregation’s pastor, offered his support. “The main reason is I believed Jim was a great leader because of his history with them,” Uth says. “I’m praying for them, whatever direction that church goes. I am praying that they will have a flourishing downtown ministry.” 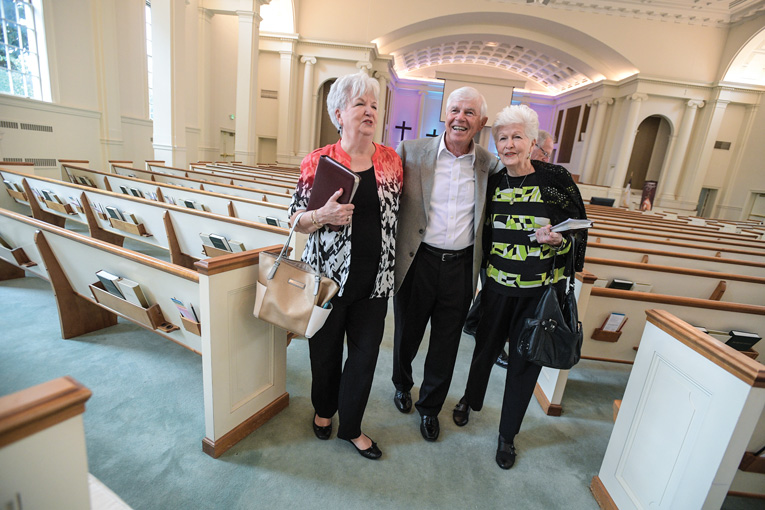 Help came from many quarters. One of Henry’s old First Baptist staff ministers joined him. The president of the Baptist College of Florida, in Graceville, offered to send student interns to lend a hand.

Despite the congregation’s dire situation, Henry saw signs of hope. There are more than 700 new condos and apartments in the area, many within walking distance and some literally being built on the church’s doorstep. Returning to Downtown Baptist was, he says,  “an opportunity to keep a lighthouse for the good news of Jesus Christ in a strategic location in a booming downtown. I saw that as the mission: Keep the light on for this position of opportunity. I see God’s hand in it.”

In addition to its location in a revived downtown, the congregation still had significant financial resources. It owns some valuable real estate beyond its campus, purchased in the congregation’s flush early years, including a parking garage and an office building, part of which is leased to the county.

Henry assumed the pulpit with the understanding that his stay would be temporary. To survive in the long term in the burgeoning downtown demographic, he felt the congregation would need a younger shepherd, and the search for that person continues today. Henry has not yet set a date for his handover, but expects it will be within the next year.

Still, Henry’s “temporary” stay in the pulpit has lasted nearly three years. During his second tenure on Pine Street, the congregation has grown to more than 300, including about a dozen of the original members. Yearly offerings have jumped from $280,000 to $1.2 million. There are now six Sunday school classes, including one in Portuguese and one for the homeless.

All things considered, bringing Henry back was a good call, congregation leaders say.

Longtime member Sidney Parrish helped plan First Baptist’s move to the suburbs, but then elected to remain with Downtown Baptist for the next 30 years.

“It was just what we needed,” says the loquacious, Bible-quoting trial lawyer. “It’s turned out very well.”

The question remains as to whether a conservative denomination like the Southern Baptist Convention, which opposes gay marriage, can take advantage of the gentrifying and apartment-dwelling young people settling in the downtown area. In 2002, as pastor of First Baptist, Henry was prominent in his opposition to Orlando’s anti-discrimination ordinance to protect gay rights, although today he says, “I think everybody should be treated fairly. Most evangelical people I know are loving and caring for everybody.”

The SBC is not considered welcoming to the LGBTQ community: Recently its leadership joined other evangelicals in declaring their long-held view that homosexuality and transgender identity is sinful. Notwithstanding, after the Pulse shootings last year, First Baptist of Orlando hosted an emotional gathering of the evangelical community.

Henry’s latest service in the pulpit caps a meteoric career. After a term as president of the Florida Baptist Convention, he led the national denomination from 1994-1996 and became known for conciliation rather than confrontation. He opposed and then tried to blunt the denomination’s ill-fated boycott of the Walt Disney Co. over policies it felt degraded family values, and was a moving force behind the SBC’s historic apology for its support of slavery and segregation. Henry followed up on the resolution by hosting a “Summit Against Racism” at First Baptist.

Now, with the end of his mission at Downtown Baptist in sight, what’s next for the seemingly tireless Jim Henry?

“I’m open to anything and any place the Lord would choose to use me,” he says. “I’m on call.”