All in the Family

Exotic and colorful, bromeliads are easy to grow—indoors and out.

“I really got into it big time,” the Winter Springs resident says. “One of the nice things about bromeliads is that they’re relatively effortless.” 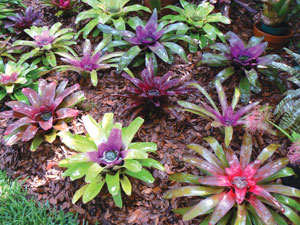 A variety of Neoregelias in a garden

For those unfamiliar with bromeliads, the best-known ones are pineapples and Spanish moss. But there are more than 3,000 species and five major varieties, each with its own nuances in terms of light and water, says Jeff Thompson, a staff landscape architect at Walt Disney World.

Although native to Central and South America, bromeliads are extremely diverse and include succulents that thrive in the desert. Most varieties are “air” plants that grow on trees and rocks in their native habitats. They get their moisture and nutrients from the atmosphere and the debris that decays in the “cups” formed by the plant’s leaves.

Bromeliads are well-suited to Central Florida’s subtropical climate and are perfect for sprucing up your landscaping, even if you’re all thumbs and not one of them is green.

“There’s nothing lower-maintenance than a bromeliad in the ground,” says Thompson. “You don’t ever have to fertilize them. If you plant them under an oak tree, they’ll love it because lots of leaf litter comes from oaks.”

A garden frost blanket will protect bromeliads during cold snaps, as long as they are a relatively cold-hardy variety, such as Neoregelias.Other popular types of bromeliads in Central Florida are Aechmeas, Guzmania and Vrieseas, says Betsy McCrory, president of the Bromeliad Society of Central Florida. 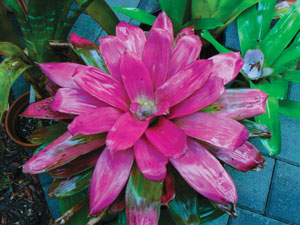 The vast majority of bromeliads bloom once in a lifetime, but they produce “pups” even as they’re declining. You can cut off the pups to start more plants, or you can just let the pups fill in your flowerbed.

To nurture bromeliads as houseplants, experts recommend using a potting mix—not soil—that is acidic and drains quickly. Water them judiciously—“if it’s still damp, leave it alone,” McCrory says—and keep them near a window for filtered sunlight. You can fertilize them with diluted liquid fertilizer, Thompson adds.

Whether you plant bromeliads under a tree, on a tree trunk (using glue and fishing line or stockings to hold them in place) or in a creative container, you’re more likely than not to have success.

“I’m told that after you’ve grown them in your yard for two or three years, you’ll have so many you won’t know what to do with them,” says Kolojeski. “That’s sort of where I’m at right now.”