All in Good Fun in Orlando’s Stand-up Comedy Scene

If you are one of the many people who have not tapped into our city’s thriving stand-up comedy scene, all you need is an introduction. 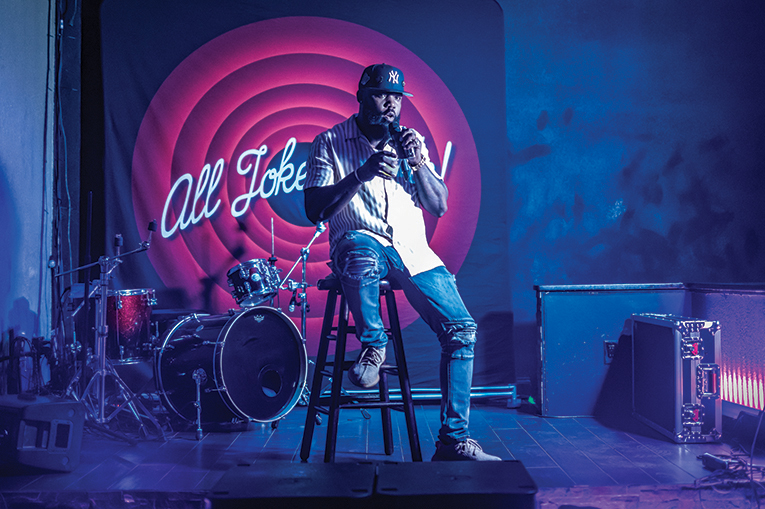 There may be no better person than Jean Anderson to convince you of the merits of Orlando comedy, given that for 16 years she has devoted three nights a week to watching live comedy throughout Central Florida.

“I’ve seen so many shows. I have watched comedians grow, burn out, pick up again. They come and go. Their sets change over the years,” she says. “I like being the one who has been there and seen it all.”

Anderson, an Emmy Award-winning sports producer, moved from New Jersey to Florida in 1999. After getting to know her new hometown, she discovered open mic night at Austin’s Coffee on Fairbanks Avenue in Winter Park—and that was the beginning of her passion for comedy. Anderson had no interest in telling jokes herself. She was—and still is—content to be in the audience, absorbed in the funny moments that erase the concerns of the day.

For the uninitiated, the Orlando comedy scene can seem overwhelming. Who is talented? Who is funny? Where can I find them?

We’ve pulled together a lineup of some of the local comedians making waves at orlandomagazine.com/comedians, but the best way to get to know the comedy world is obvious: Be part of the audience at open mics and showcases. Post up at a table, order a beer and watch the antics unfold.

There’s a show of some kind every night of the week. They’re all open to the public, and some are free. We’ll walk you through a typical week, highlighting a few of the best rooms and the hosts who make them.

The Monday night open mic has been running for over a decade, though it moved to a new spot last year: Harry Buffalo on Church Street in downtown Orlando. The audience is relatively sparse at the saloon, but there’s no better place to see new comedians trying out their material while being taunted by their peers.

The hosting is spare, there’s no music to transition between comedians, and it’s less of an organized show and more stream of consciousness.

Harry Buffalo is your comedy spot if: 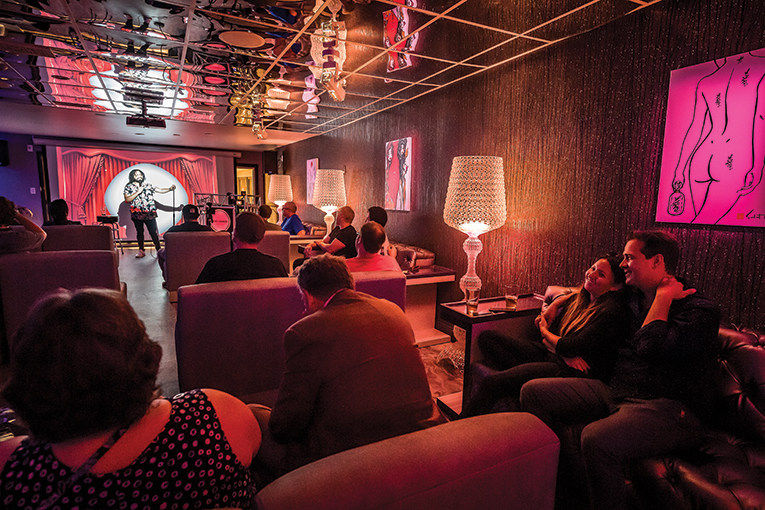 Tuesday nights are packed with laughs all over town, so it’s hard to pick a favorite. All Jokes Aside Comedy Showcase hosted by the brazen provocateur Wil Miller at Night Shade Lounge on West Church Street may be the best bet.

Night Shade is sexy in every way. The lighting, music and overall vibe make for a great date night, girls’ night out, guys’ night out, or solo escapade. Miller’s larger-than-life personality is the core of the show and his headliners deliver.

Night Shade Lounge is your comedy spot if:

The Dreams Lounge on Highway 17-92 in Fern Park recently launched Comedy, Karaoke & Cocktails, hosted by Vince Taylor. It’s a whole night of fun that kicks off with Happy Hour at 7 p.m., perks up with a comedy open mic from 8:30 to 10 p.m., and closes out with karaoke that starts at 10:30 p.m.

The Lounge is tucked away behind a smoke shop and, despite the lack of curb appeal, the nightclub’s interiors are stylish and inviting. The sofas and booths, full bar, hookah and great sound system are enticing, but the host is the big draw.

“Vince Taylor is hands down the best host in Orlando,” says Wil Miller. “He never stops giving to the audience. He is versatile, well-versed on every topic, and can handle any kind of audience, from a church to a club.”

The Dreams Lounge is your comedy spot if:

Beau Monde on South Magnolia Avenue has the most popular Thursday open mic, hosted by Carmen Vallone and stretching from 8 p.m. to well past 11. Often, more than 40 comics go up. The Beau Monde energy—cushy seating, low lighting and nonstop entertainment—gives this venue the feel of a big city club. If you need to take a break from the comedy marathon, step away for a bit to the downstairs bar.

Beau Monde is your comedy spot if:

Your Next Night Out

The weekend offers plentiful laughs as well, and we have gathered all the details you need to find your comedy fit. Follow our guide and you’ll probably bump into Jean Anderson on the comedy trail—she’s a veritable encyclopedia of local comedy knowledge, so don’t be afraid to ask her to share her favorite tips on local clubs and comedians. orlandomagazine.com/comedyspots 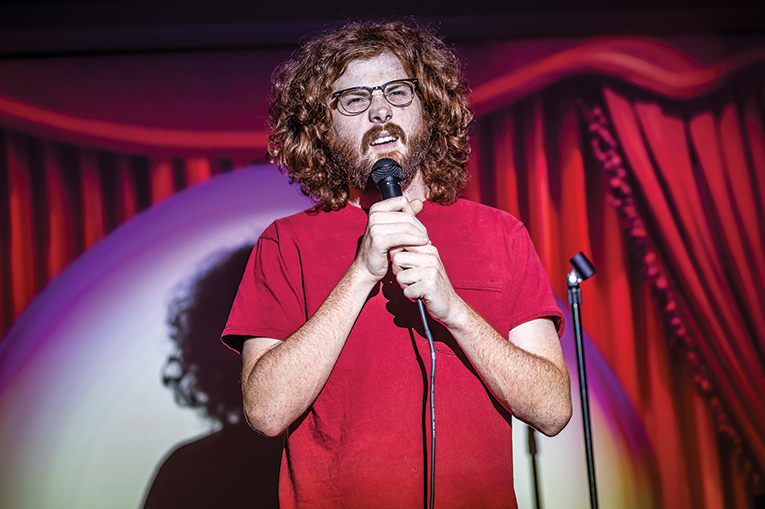 The Comedy Glossary You Didn’t Know You Needed

Open mics, or simply mics, are exactly what they sound like. Anyone willing to risk trying out their jokes in front of an audience can sign up and take their shot. Experienced comedians usually try out new material at mics before they incorporate them into their set.

“Now that I’m divorced, I’m trying new things. I usually do the open mic at Orlando Meats on Friday.”

A showcase is more exclusive than a mic. Comedians are invited to the stage; it’s not a free-for-all. Typically, a showcase includes more experienced comedians and the quality of the sets is higher. Showcases usually have a cover charge, and the comedians are paid.

“Some of the comedians are doing showcases for free, which lowers the value of our work. I wish they would maintain standards!”

Comedy rooms, or simply rooms, are restaurants, bars and nightclubs that make space for comedy every week or
for special events.

“Hey, did you hear that Carmen Vallone has a room at Beau Monde on Thursday nights? That place is swank.”

Comedy hosts, room hosts or simply hosts are usually stand-up comedians with a gift for hosting.

“I really miss Ken Miller hosting at The Other Bar on Wall Street. Sometimes I cry about it.”

A set is a comedian’s monologue, a grouping of stories, jokes and one-liners. Each element in a set can be swapped out for a different one as a comedian’s skills grow.

“Ken Miller’s set has changed over the past sixteen years, but he still tells the joke about wearing a hand-me-down scrunchy from his sister.”

Killing, in this case, is a good thing. When a comedian slays the room, he really delivers, and the laughs prove it.

“DJ Santana killed the other night at Grumpy’s. I laughed so hard my stomach still hurts.”

Bombing, on the other hand, is painful, and it happens a lot. When a comedian makes no sense, is not funny, and makes you wish he would end the misery and get off stage, he bombed.

“I saw Joe Censabella bomb at Tin Roof a while back, but the last five times I’ve seen his set he was seriously on point.”

This article appears in the August 2021 issue of Orlando Magazine.
Tags: comedy, comedy clubs, laughs, Orlando
Want to read the whole issue? Download and read this issue and others on Magzter.