After Hours: Laugh Out Loud

There’s a stand-up comedy performance happening near you tonight. Do yourself a favor and be there. 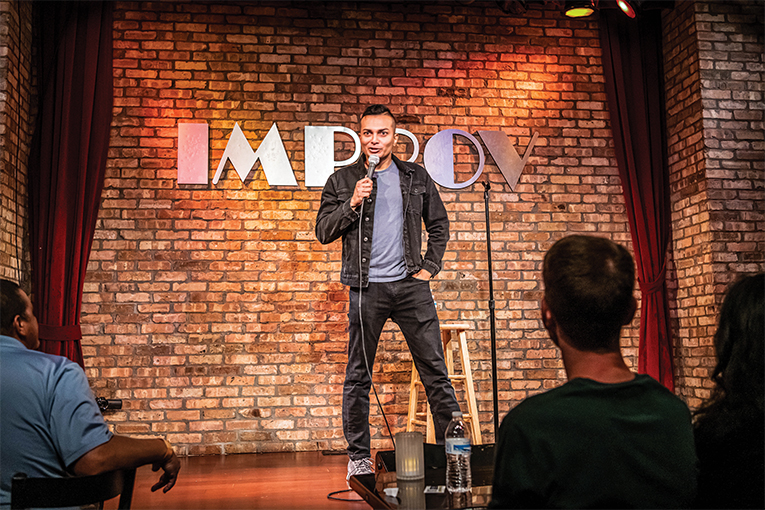 Orlando has a stand-up comedy scene that’s special by every measure.

Busy with his architecture career, Mark McKay wanted to try stand-up for 18 years before he finally took the plunge in 2018. “I learned joke structure and how to avoid bad stand-up habits and found a safe place to work on material in front of supportive classmates and comedians,” he said.

From there, McKay ventured into open mic territory twice a week. These days, he features at Bloodhound Brew on Conroy and hosts for the Bonkerz outposts at Twisted Root Burger in Winter Park and Margaritaville Resort in Kissimmee.

Orlando has open mics every night of the week, which gives our comedians ample opportunity to hone their craft. If it’s 9 p.m. on a Tuesday, the mic at Harry Buffalo is getting rolling. At the same time on Tuesday, the mic at Ann Teague’s is starting soon, so head downtown and find some parking. There are mics every night all over Orange County. While these mics are ubiquitous, don’t think they are diluted. A pack of comedians travels between them since there are multiples every night, and the momentum yields a tour de force. Rather than petering out, comedians find stronger footing through the evening.

Comedy showcases dot the calendar, too, typically with a fleet of more experienced comedians doing sets so original and clever, it can be stupefying. This summer, Joe Censabella put together a Best of Orlando at Orlando Improv showcase that truly delivered. Host Dewayne Williams, a familiar face thanks to his commercials for Universal Studios, was a riot. Only a year and a half into his career, Kam Patterson held his own as the opening act. Christophe Jean, thought to be the most talented local comedy writer, didn’t miss a beat. Censabella’s own set brought down the house. 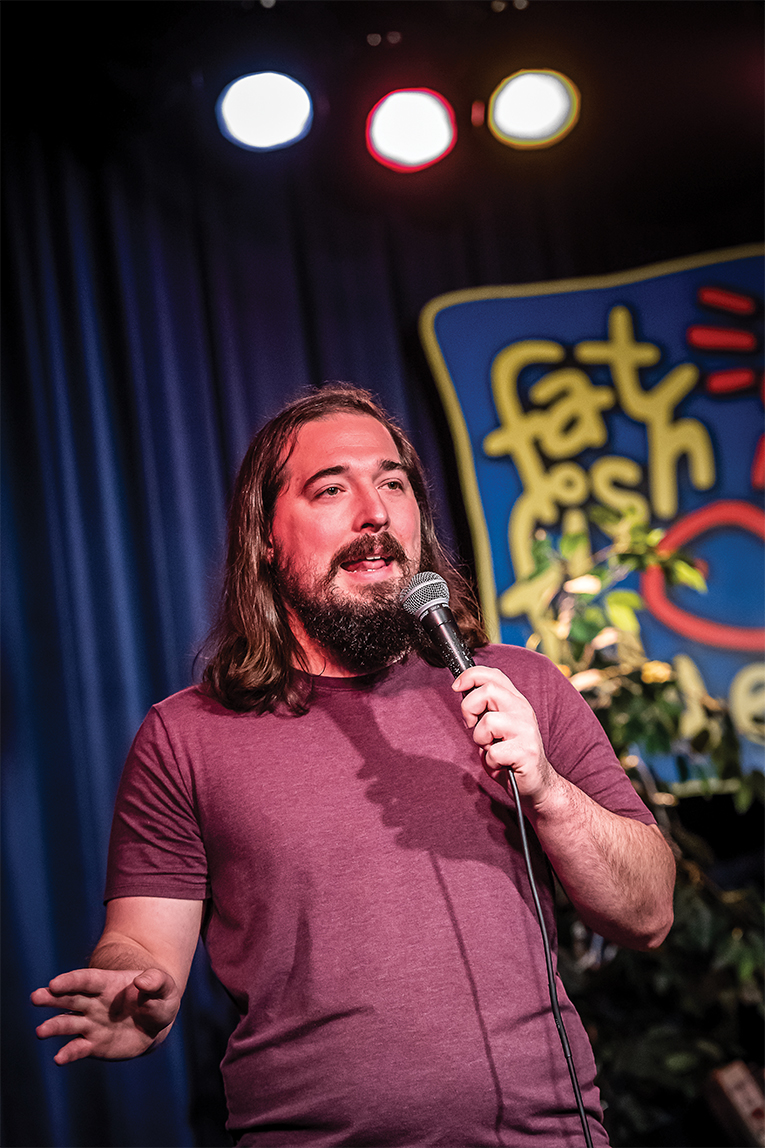 Joe Sanfilippo, founder, and president of Bonkerz Comedy Clubs, has crystal clear memories of Orlando’s comedy scene in the late 80s—when Orlando first emerged as a breeding ground for great comedy. In 1989, Bonkerz moved into J.J. Whispers off Lee Road.

“Tuesday was originally Bonkerz’s open mic night, and we had to add Wednesday because there were about 100 comics per week trying to go onstage,” he said. “Universal had just opened, and they were filming all kinds of things, and there was a bunch of work for comics being warmups. Philmore was a warmup on the Mickey Mouse Club, and then he became a substitute host on some of the game shows being filmed in Orlando. MTV Remote Control was here. VH1 was here. Then Showtime came to us wanting to do a series of comedy specials, and Orlando was one place they wanted to do it.”

Bonkerz produced eight of those specials with Showtime, and Billy Gardell and Darrell Hammond were the first two featured.

All that activity made Orlando a magnet for comedians, and while television production has shifted away from Orlando, the comedy remains. The spark from three decades ago ignited a fire that’s still burning.
You’ll see it raging at Orlando Improv on International Drive, where Dewayne Williams frequently hosts big acts touring through town.

“The Improv is one of the premier comedy clubs in the country, where everyone on the come up like myself wants to get on. It’s like a rite of passage. Once you get on that stage, you feel like you’ve made it somewhere,” Williams explained.

He spends a lot of time at the club, meeting touring features and headliners, and making himself available for hosting gigs.

The headliner’s management doesn’t always have a host lined up, and I’m there for the opportunity,” he said.
His presence is a golden opportunity for the audience, who showed up for the headliner and was gifted with the unexpected bonus of Williams at the mic. Williams’ likeability is through the roof, and his smarts play out in beautifully constructed jokes. His punchlines are unforgettable.

Williams is one of the standout stand-ups fueling the City Beautiful’s entertainment scene. There are more, and you don’t want to miss them.

Check out our Standout Standup Guide at orlandomagazine.com/standout-standups. 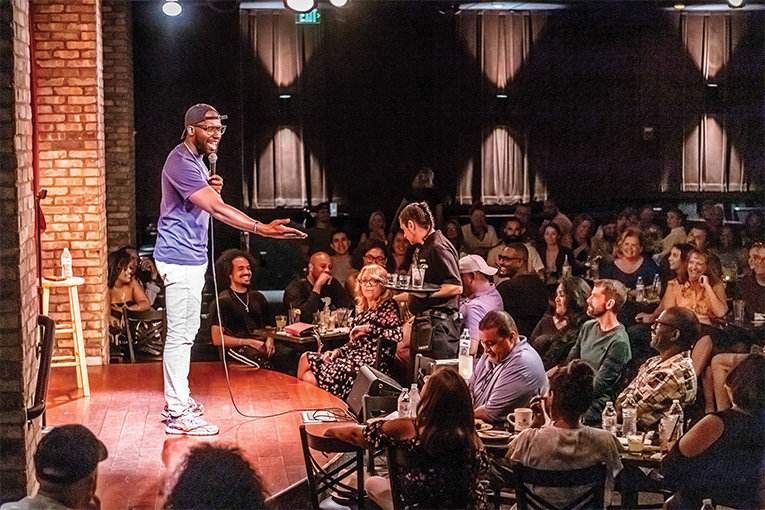 Who Does What in Comedy?

For the uninitiated, it’s hard to know what to expect from an open mic versus a comedy show. What’s the difference between a guest spot, a feature, and a headliner? Is the host a comedian, too? What’s her job? Does work in the field of stand-up comedy count as a job?

The host has an important job: Warming up the audience, establishing and maintaining the tone, keeping the show moving, and concluding the show at the right time. Lisa Rod-Davis, who hosts Bonkerz comedy shows, said, “If the show starts at 7:30 p.m., it should be done by nine. You start by reviewing the rules with the audience, like keeping table talk down. I always tell them to use their inside voice. And no flash photography or video. A flashing light signals a one-minute warning that a comedian’s time is almost up, so giving the comedian the light at the wrong time could mess up the pacing of the whole show.” Warming up the audience amounts to delivering a seven to ten-minute set, which means the host is doing much more than classroom management. They are seasoned comedians with the same substance as a feature or headliner. For example, Vince Taylor and Ken Miller, both of whom are reliably hilarious Orlando headliners, are also excellent hosts.

It takes time and deliberation for a comedian to build a set. Believe it or not, a strong five-minute set is an achievement. That five-minute mark can earn a comedian a guest spot. Ross McCoy, who hosts an open mic each Wednesday night and a showcase every other Saturday night—both at Bull and Bush on Robinson—explains: “You need to be able to go up in front of an audience and do five good minutes. Not four minutes and 30 seconds and not five minutes and 45 seconds. Five minutes.” And this is where a respectful audience helps. Hecklers can disturb the flow of a set and throw it off track. Timing is everything in the world of comedy. Hecklers approaching the stage are a problem—and McCoy has managed them—but even intrusive utterances from the crowd can be a problem. If you’re a heckler, ask yourself how that would fly if you were interrupting a musical at Dr. Phillips Center for the Performing Arts.

A featured comedian gets twenty to thirty minutes on stage. On the website, you’ll learn about some of our favorite features in our Standout Standup Guide.

The crème de la crème, the most experienced and beloved headliners, deliver jokes anywhere from 45 minutes to an hour and 15 minutes. They are held to a national standard, and we’ve also covered them in our Standout Standup Guide.

This article appears in the September 2022 issue of Orlando Magazine.
Categories: Art & Entertainment
Tags: after dark, after hours, comedians, entertainment, nightlife
Want to read the whole issue? Download and read this issue and others on Magzter.