Our area has a lot to offer after the sun sets, from family-friendly to risqué, romantic to adventurous. Here are 25 prime evening excursions.

Part live music venue, part gourmet tapas bar, Maitland’s Jazz Tastings (jazztastings.com) filled the void in Orlando’s jazz scene earlier this year when it began hosting live jazz bands six nights a week. Only about a dozen tables  are crowded into this space but all get unobstructed stage views of the band, which is typically a local crew. “Most venues that play music are restaurants that have music as the background,” says co-owner Rory Frazier. “Our venue focuses on the people enjoying the artist, and we complement it with an intimate setting, good food and wines.” 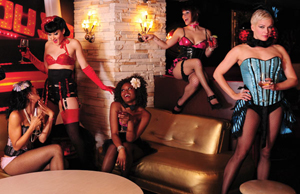 Step into the slightly naughty world of burlesque at Peek-A-Boo Lounge, a revival of the classy and classic striptease. Hosted inside downtown’s dimly lit, retro Vegas-themed Stardust Lounge (stardust orlando.com), Peek-A-Boo features the tantalizing talents of local burlesque dancers, all skilled in the bold and theatrical art of almost taking it all off. The show, which usually sells out with pre-booked table reservations, begins at 10 p.m. on the first and third Wednesday of each month. 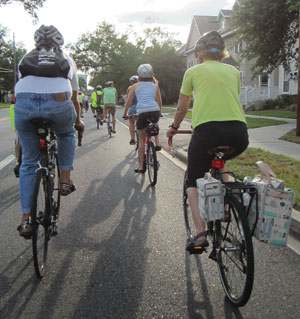 Kick off the weekend with a bike ride: First Friday—Take it to the Streets, the monthly social cycle organized by Bike/Walk Central Florida (bikewalkcentralflorida.org). Riders meet outside the Mennello Museum of American Art at 6 p.m. on the first Friday of every month,  then head off at 10 mph on the 10-mile, roundtrip route through downtown. “This is not a spandex group; we’re a social ride,” says Brad Kuhn, executive director of Bike/Walk Central Florida. Afterward, the group breaks bread at one of the restaurants in nearby Mills 50 or Ivanhoe Village.

Settle into the stadium-style seating at the Eddie Rose Amphitheatre, which hosts local bands for Friday Night Live, every Friday beginning at 7 or 8 p.m. Free and open to all music lovers, the outdoor concert features an ever-changing lineup of musical styles—calypso to rock to jazz—with Cranes Roost, Uptown Altamonte’s (uptown altamonte.com) 45-acre park, providing a pretty backdrop and post-concert strolling ground.

Head to downtown’s CityArts Factory, where SAK Comedy Lab (sak.com), the improvisational sketch show, presents a completely different performance each time its screwball comedy troupe hits the stage. Reminiscent of the TV show Whose Line is It Anyway?, this style of comedy typically consists of several unscripted scenes stitched together into one 90-minute show.

Explore the Winter Park chain of lakes via kayak on a full moon paddle courtesy of Adventures in Florida (adventuresinflorida.com). This monthly outing, typically scheduled when the moon is at its fullest, boasts a moderately challenging, two-hour excursion on lakes Virginia, Osceola and Maitland. At its completion, paddlers make a stop at Dog Island to toast the moon with a glass of BYO wine and enjoy some fireside snacks. The tour, which includes all equipment, departs before sunset from Dinky Dock Park near Rollins College.

Local food lovers have staked their ground at the Audubon Park Community Market (ap market.wordpress.com), where coordinators are devoted to supporting Orlando-area farmers and food purveyors. Besides produce, seafood, fresh eggs and meat, this Monday night market, which is hosted outside Stardust Video & Coffee from 6 to 10 p.m., also boasts gourmet items from Big Wheel Provisions and Winter Park Dairy, as well as a rotating selection of handmade crafts.

A mostly coupled crowd, with wine and dinner baskets in hand, attends Date Night at Leu Gardens the first Friday of each month at the 50-acre botanical oasis just north of downtown. Upcoming films, which cost around $5, include The Vow (October) and Rear Window (November).  A bit farther north, the City of Winter Park and Enzian Theater host Popcorn Flicks in the Park, a free movie screening in Central Park, the second Thursday of each month. Expect a diverse selection of films, such as Abbott and Costello Meet Frankenstein, in the upcoming fall series. On the second Saturday of most months, Sunset Cinema at Uptown Altamonte (uptown altamonte.com) shows a free family favorite on their alfresco screen at Cranes Roost Plaza. 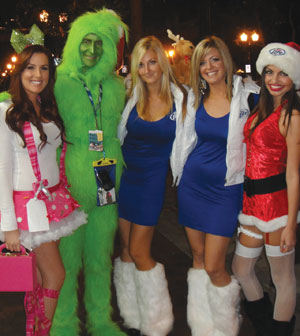 Channel your inner college student on an Orlando Pub Crawl (orlandopubcrawl.com), the booze-focused tour that descends on downtown every month. Hundreds of revelers journey to four area watering holes for a complimentary Miller Lite or Bacardi cocktail that their prepaid lanyard will buy them at each stop. Co-founder Cameron Parker encourages attendees to play up the monthly theme, such as Crazy ’80s, with costumes. “We call it ‘Experience Orlando on all fours,’ but no one really crawls from bar to bar—at least not intentionally,” Parker says.

Take the exhilaration of zip-lining to new heights with ZOOm Air (zoomair.us), an evening aerial adventure at the Central Florida Zoo. This 2.5-hour canopy walk and zip through the moonlit trees departs at 8 p.m. and can be arranged any night for a minimum of four people. In St. Cloud, Forever Florida’s (floridaecosafaris.com) Starlight and Moonlight Zipline Safaris, scheduled every Saturday throughout the fall, send zipliners on a journey through seven zips and three skybridges at speeds of up to 30 mph.

The movie shown on the giant outdoor screen next to Eden Bar is actually more of a backdrop than the focal point at the Enzian Theater’s (enzian.org) Wednesday Night Pitcher Show, where a laid-back crowd sips happy hour cocktails and partakes in JELL-O shot movie trivia. October’s lineup for this free weekly event, including Dawn of the Dead (Oct. 3) and Poltergeist (Oct. 31), will be on the frightful side. 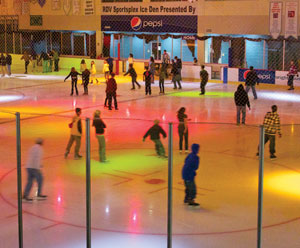 Pack a sweater and warm socks if you’re planning to visit RDV Sportplex’s Ice Den (mvpsports clubs.com); Maitland’s Olympic-size ice skating rink is kept at a chilly 50 degrees. The best time to hit the rink is on Friday and Saturday evenings from 7 to 9:45 when the giddy swarm of skaters glides to tunes spun by the resident DJ. Skate rentals, as well as hot chocolate, are available on site.

With a throng of ongoing events hosted at picturesque parks and hip dining districts across the city, gourmet food trucking has emerged as one of Orlando’s favorite pastimes. Every month, The Food Truck Bazaar (the foodtruckbazaar.com), created by Mark Baratelli, hosts at least 10 starlit shindigs in Osceola, Orange and Seminole counties. Don’t forget chairs or a blanket; seating is scarce. 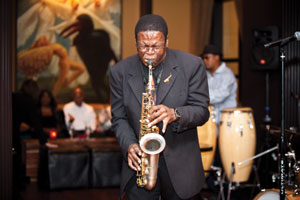 An eclectic range of musical acts paired with an intimate concert setting has won points with Orlando music lovers who are always kept guessing at who will be the next act booked at The Plaza Live (plazaliveorlando.com), the small live music venue just east of downtown. Wine and beer, as well as snacks and sandwiches, are served on site, but don’t be surprised to see a handful of food trucks after the show; The Plaza’s parking lot has become a popular stop.

Out of the ashes of downtown’s beloved bookstore, Urban Think, a communal workspace dubbed Urban ReThink emerged and now stages the monthly literary event “There Will Be Words” (urbanrethink.com). Scheduled  on the second Tuesday of every month beginning at 7 p.m., the gathering features an ever-changing lineup of local poets, actors, comedians, and nonfiction and fiction writers who read or perform their original work on stage. “The talent that we have here in Orlando deserves the spotlight,” says J. Bradley, the event’s curator. Arrive around 6 p.m. to enjoy the pre-show happy hour.

Dinner and a Movie

Try a new take on this date night staple with a visit to the charming Winter Garden Historic District. Grab a bite at The Tasting Room (chefstableat theedgewater.com), the casual, tapas-style spinoff of the popular Chef’s Table, where diners can share a few small plates and sip craft beer. Afterward, head to the nearby Garden Theatre (gardentheatre.org), the 1935 Mediterranean Revival-style venue now hosting plays, concerts and cult classic films.

No prudes allowed at Hamburger Mary’s (hamburger marys-orlando.com) team trivia night, every Wednesday starting at 7:30 p.m. at the kitschy Church Street diner. Two-for-one cocktails fuel an already raucous atmosphere created by Doug Bouser, the no-holds-barred trivia host tossing two hours of decidedly dirty challenges to the crowd. Teams, often branded with naughty nicknames, play for gift certificates, but mostly for the chance to misbehave in public with few repercussions. Trivia not your thing? There’s also Tuesday night bingo, which is just as hilarious.

Maitland Art Center’s (artand history.org) monthly Culture and Cocktails get-together is designed to make art appreciation less of a highbrow affair and more like a casual gathering. Planners feature a local artist and also invite a hip local band and a few food trucks to join in the whimsical fun, which takes place from 6 to 9 p.m. on the second Friday of the month, November to April. While the hub of the event is the Center’s Germaine Marvel Building, access to the gallery museum, as well as the stunning courtyard and gardens, is open to all attendees paying the $5 admission. 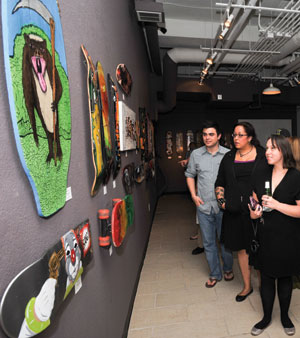 The Orlando Museum of Art (omart.org) loosens its necktie during its 1st Thursdays art party as art enthusiasts descend on the Loch Haven museum to check out its 12 regular exhibits plus a newly curated show or theme compiled just for each month’s event. From 6 to 9 p.m. attendees roam the museum sipping wine, sampling fare provided by local restaurants, and listening to music by a live band. Admission is $10, but free for museum members. Meanwhile, downtown, the Downtown Arts District (orlandoslice.com) hosts the 3rd Thursday Gallery Hop & Art Walk, when more than a dozen galleries and non-traditional art venues showcase the works of local, national and international artists from 6 to 9 p.m. Street performers, live music, and food and drink specials at participating restaurants and bars add to the celebratory vibe for this free event. 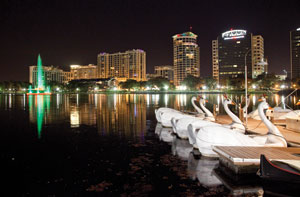 Paddle out onto the city’s iconic lake in a swan boat (above) for an atypical view of Orlando’s downtown night sky. Boats can be rented from the swan dock across from Relax Grill and taken out until 7 p.m. Sunday–Tuesday and until 10 p.m. Wednesday–Saturday. Reservations are not required and both cash and credit are accepted for the $15-per-half-hour paddle.

Jump and jive to your heart’s content every Friday night at UCF’s Ferrell Commons Auditorium, where members of the swing dance club, Swing Knights (swingknights.org), meet to strut their stuff. While the dance floor tends to be occupied mostly by UCF students, all who pay the $5 admission are welcome to this friendly affair. Anxious beginners can lose their inhibitions at the pre-dance swing lesson scheduled 30 minutes before the 9 p.m. main event.

Bring the cosmos into view at the Crosby Observatory atop the Orlando Science Center (osc.org), where skywatching events are scheduled on weekend evenings throughout the fall and winter. Visitors can expect to see all the wonders of the night sky including Jupiter, Saturn and several star clusters through one of the largest publicly accessible refractor telescopes in Florida. In addition to the main scope, the observatory boasts several others to peer through, as well as one of the best views of the Orlando skyline. 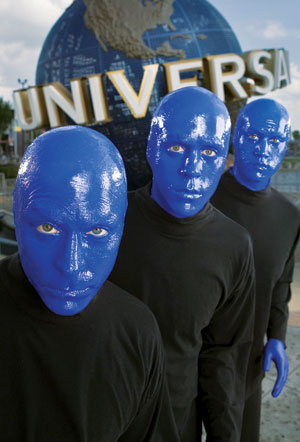 Check out the clever, funny and slightly quirky Blue Man Group VIP-style with a visit to the newly unveiled Bluephoria Lounge. This $20 ticket upgrade lets attendees relax and sip drinks gratis in a chic cocktail bar overlooking the entrance to the Blue Man Group Theatre  (universalorlando.com/blue man) while everyone else waits in line for access to the performance. After the show, guests gather once again in the lounge for photo ops and a meet-and-greet with a member of the Blue Man Group.
This article appears in the October 2012 issue of Orlando Magazine.
Categories: Features