After Dark: More Than Just Drinks

Raise a glass to these spirited activities happening at five local watering holes.

These days it is almost impossible to keep up with Orlando’s ever-evolving nightlife scene. A creative cocktail list, happy hour deals, and an inviting atmosphere are all things to consider when picking a place to unwind after a long week. However, if you’re looking for something truly unique, many local bars and breweries are thinking outside the box by hosting one-of-a-kind events that appeal to drinkers and non-drinkers alike. No matter where your interests lie—from music to board games to working up a sweat—these after-hour activities are worth checking out (and cheers-ing to).

What it is: An outdoor drum circle where locals gather around the firepit celebrating a night of music and good beer. “It is a unique experience that can be appreciated both by those who are looking to drum and by people who want to just watch,” says Mary McGinn, media manager at Orlando Brewing, located on the south side of downtown.

When it happens: The first Saturday of every month from 8 p.m. until about midnight.

How long it’s been around: More than 10 years.

What to bring: Your own drum. Chairs are a good idea, too. “People also bring their dogs, their kids, their hula hoops, and a happy, laid-back energy,” says McGinn.

What to drink: Orlando Brewing has 35 house beers on tap and 37 total draft beers. There’s also pineapple cider, wine and craft soda for the non-beer drinkers.

Most memorable experience: “We had an art opening in conjunction with the drum circle a few months ago. Artists were painting and blowing glass, and there were many local vendors. Everyone was feeling good vibes and a connection to the local community,” says McGinn. 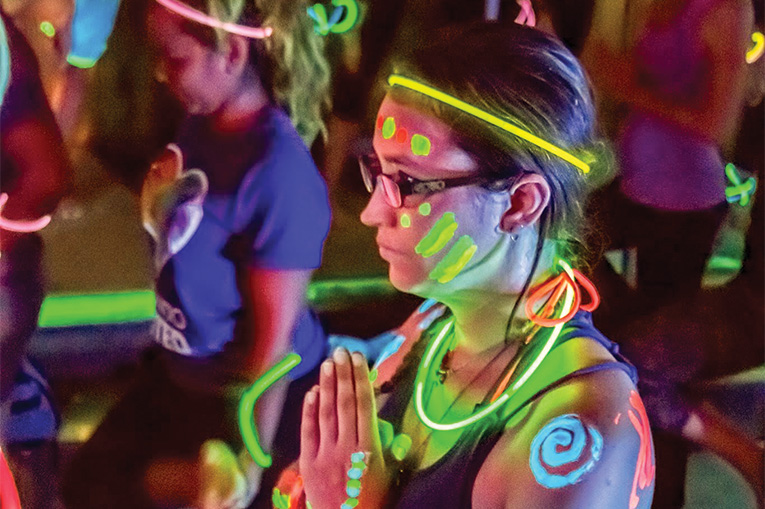 What it is: PLA.Yoga Studio hosts an open-air, high-energy vinyasa flow class under UV black lights.

When it happens: Once a month, weather permitting.

How much it costs: $20 in advance, $25 at the door. Price includes a drink and supplies to get your glow on.

How to get glowing: After the doors open at 7 p.m., participants have 30 minutes to paint themselves—and others—with GlowPaint that’s designed to be used under black lights. Glow sticks also are provided. “Participants light up Aero in their unique, creative, and self-expressed way of being,” says Alex Cuellar, owner of PLA.Yoga Studio.

The playlist: Forget typical yoga music. “A combination of alternative yogi DJs mixed with a little hip hop and the current top alternative tunes are included in the empowering mix,” explains Cuellar of the sound.

Post-class fun: Keep the sweat going by sticking around for a VIP dance party known as “an AcroYoga mini jam.” 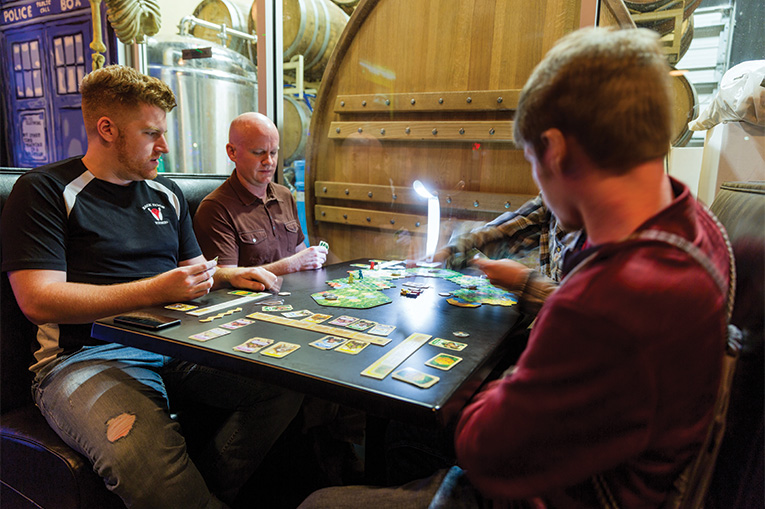 The Thirsty Gamers Board Game Night at Hourglass Brewing

What it is: Every Thursday from 6 to 11 p.m., bring your own game—or just yourself—for some friendly competition.

How it started: “I wanted to expand my board-gaming experience with others and bring board gaming and social interaction to locals while making great friends along the way,” explains Zack Crawford of why he started The Thirsty Gamers, the group behind Hourglass Brewing's weekly get-together.

How many gamers attend: Typically, 25 to 30 people play each week, but occasionally that number can exceed 40.

The games: “We play every type possible. There are party-style games, social deduction, strategy, dexterity, card and more,” says Crawford. Although, don’t expect tournament-style play. Everyone is there just for fun and to throw back a pint or two.

No gaming expertise required: “We teach every game,” says Crawford. “You shouldn’t feel nervous or overwhelmed because everybody is awesome about teaching others.”

Food and drink options: Half off your first beer if you mention you’re with The Thirsty Gamers. “Get food next door at Wako Taco or Papa Bees,” adds Crawford. 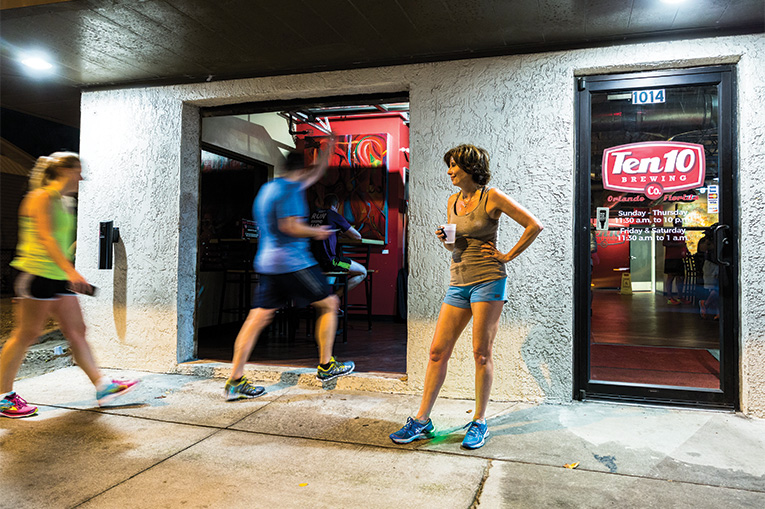 What it is: A weekly running club that starts and ends at Ten10 Brewing.

How it started: “One of the founders of our run club had his final night with the group before moving to Nashville. As a send-off present, the group got him a custom-inscribed Corksicle mug that read, ‘An idea over a pint became an event. That event became a club. That club became a community.’ I don’t think I can give you a better description about how it started than that,” says George Saunders, general manager at Ten10 Brewing Company.

Number of regular runners: “There are consistently around 60 runners per week, with some weeks exceeding 100 runners,” says Saunders.

The routes: Runners can choose from three pre-determined routes: A two-miler, a 5K, and a 10K.

The reward for finishing: All runners receive happy hour pricing on beers. There are also charity raffles, samples, and coupons from local and national vendors that include shoe companies, massage therapists, running apparel companies, and Orlando food and drink purveyors. 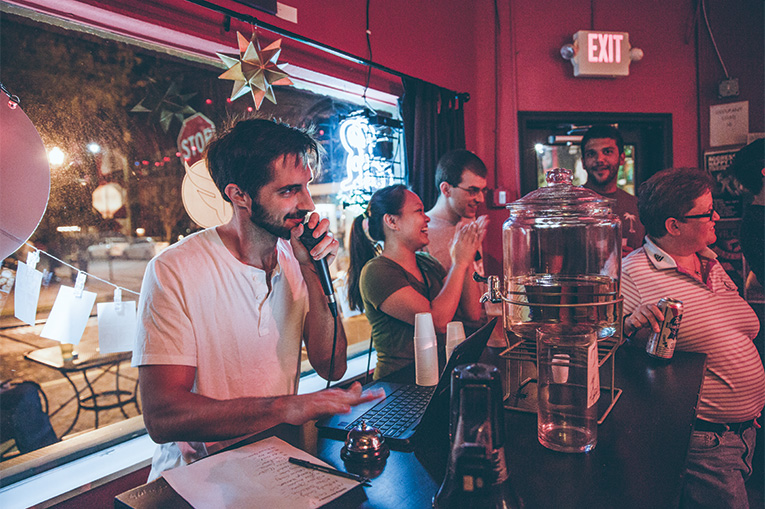 What it is: A classic spelling bee with a major twist—participants can drink during the event, which takes place periodically.

How it started: “One of our customers suggested the idea,” explains Melissa Schumann, owner of The Falcon Bar & Gallery. “Our bartender Kirk is the master of ceremonies, and he organizes the spelling bee list and makes sure everyone is following the rules. People get pretty competitive.”

House rules: The bee starts at 9:30 p.m. and consists of three rounds. The winner of each round goes on to compete for the grand prize. If you misspell a word, you’re out.

The most difficult words: “It gets more challenging as our guests partake in a few drinks—basic words that are commonly misspelled like “receive” to more challenging words like “serendipitous,” says Schumann.

The prizes: They’re given out after each round, and then there is a grand prize.  “And of course, world fame and bragging rights!” says Schumann.