Orlando’s dive bars serve up stiff drinks with a side of history.

Neon signs, iconic memorabilia, and tales of a time of railroads and handwritten letters are the vibe behind some of Orlando’s most beloved dive bars. Happy hours here stand the test of time with bartenders that won’t just remember your name, but your beverage of choice, too. Here’s a look at some of our favorite dive bars, their unique history, and why they are living pieces of the past, with a lot of spirit.

How It Started: Initially known as Orange Avenue Liquor & Bar, The Caboose dates back to the 1940s. In 2007, Tim Scott purchased the building and revived the bar with a concept that incorporated his family’s history with the railroad and its location near the railroad tracks into what is known today as The Caboose.

Iconic Décor: An eclectic mix of railroad memorabilia and vintage images of Old Florida decorate the walls throughout the bar, which is located in Ivanhoe Village. “I got the idea because my family worked on the railroad, and The Caboose was the meeting place for the railroad workers,” Scott says.

Toys & Tunes: In addition to a jukebox, pool tables, and an “entertainment pole,” the live entertainment schedule includes a variety of bands and genres from Custard Pie (a Led Zeppelin tribute band), to reggae, burlesque shows, and open mic nights.

Celebrity Patron: No visit to The Caboose is complete without a greeting from Gunner, Scott’s German Shepherd. If he’s not sitting by the door, Gunner can usually be found collecting railroad rocks from the tracks and carefully placing them in his favorite spot. And while his fluffy tail may have had one unfortunate run-in on the tracks, it seems this gentle giant is still just as big a fan of the railroad as his owner. 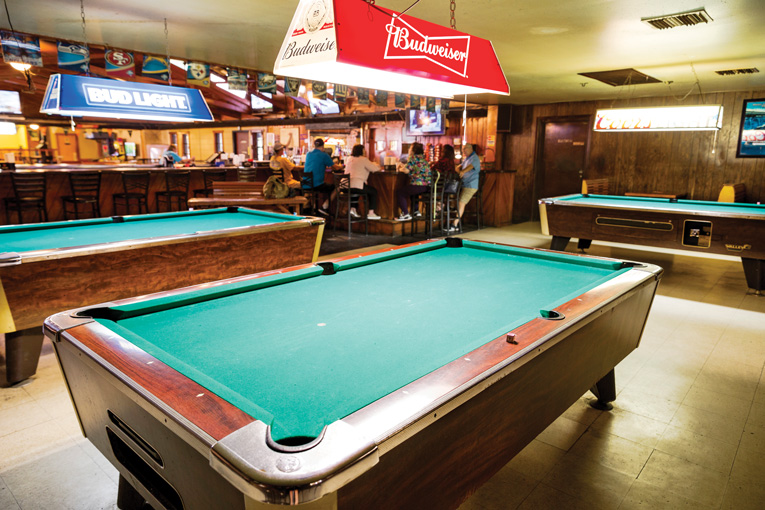 How It Started: When George and Fara Fekany came across a small hunting lodge for sale back in the 1970s, they knew it would be the perfect place to fulfill George’s dream of owning a bar. “With nothing more than a cigar box as a register, a beer license and two brands of beer, he opened the doors,” George’s son, Daniel, says. “As years progressed, additions were built, we got a liquor license, and the rest is history.” George passed in 1995, but his sons continue to remember their father and his dream.

Iconic Décor: From the original fireplace to the wood beams and vaulted ceilings, George’s exudes a rustic feel. Located on Edgewater Drive, the bar has expanded beyond a one-room hunting lodge into an open concept that includes handmade furniture, a liquor store, an outdoor beer garden, and a fire pit.

Toys & Tunes: With six pool tables on the floor, George’s is the host location for Orlando’s APA league. A jukebox, electronic dartboards, and Golden Tee Golf also are on hand. Plus Sunday cornhole tournaments.

Must-Order Item: The lightly seasoned cheese steak sandwich is the most popular item on the menu. “No matter how the times may change, one thing that is a staple is our famous cheese steak,” Daniel Fekany says. 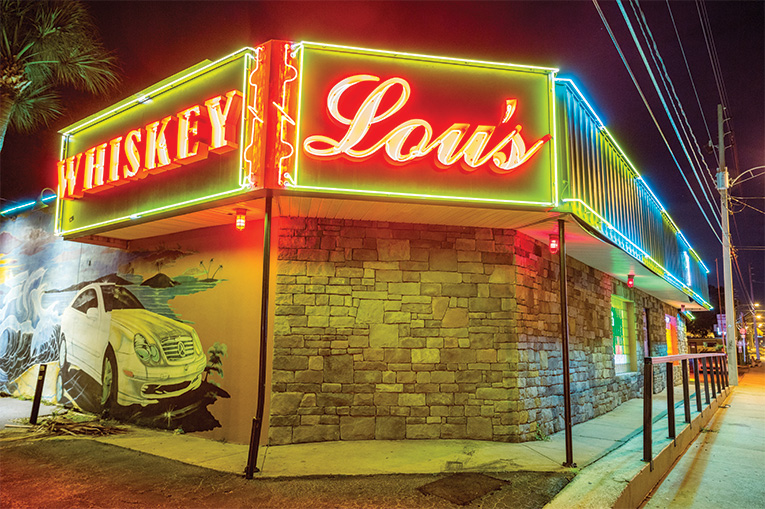 How It Started: Located in the Milk District, Whiskey Lou’s Lounge was established in the mid-1970s when Lou Waters purchased it. And that ‘70s vibe is still there. “If it ain’t broken, don’t fix it,” the staff credits Waters with saying. Since his passing in 2008, Waters’ cousin has taken over, but the same neighborhood feel that its regulars have come to call home remains.

Iconic Décor: The large neon signs make Whiskey Lou’s hard to miss. Once inside, the wide bar is like an inviting living room attended by seasoned bartenders. Let your eyes adjust to the dim lighting, then you’ll see why the life-sized Elvis and Blues Brothers statues are popular spots for photo ops and even a few wedding ceremonies. Nothing comes as a surprise to bartender Catherine Sarkisian. “Some couples have even come dressed in 1950s and ‘60s attire to get married,” she says.

Toys & Tunes: While “Elvis” and “Jake and Elwood” keep watch over the cash-only bar, there are two pool tables, quarter-game machines, and a jukebox for entertainment.

Ask the Bartender: With bartenders who have been here as long as 13 years, and patrons ranging from Mr. Nines, an elderly gentleman who arrives dressed in a dapper suit and hat, to the younger crowd wanting a taste of the past, this bar feels more like a gathering of your quirky relatives than a business. 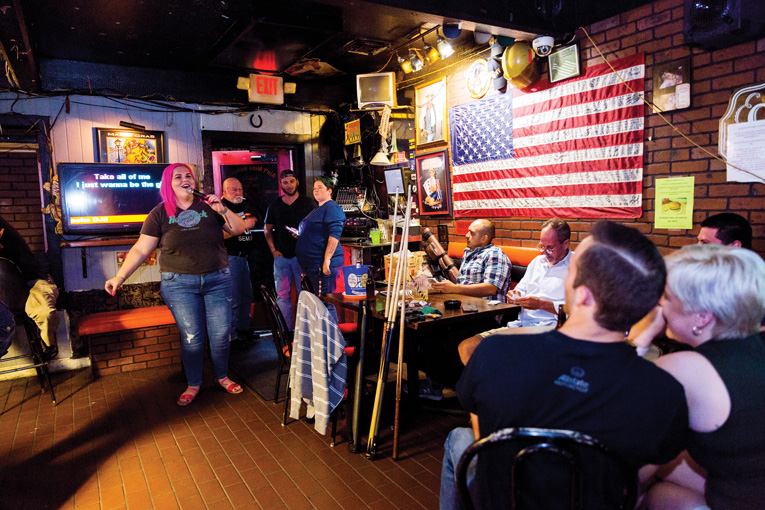 How It Started: With the vision to own a bar like the one in the movie Coyote Ugly, owner Regina Grosse opened Ain’t Miss Behavin’, located on the outskirts of Winter Park. She welcomes all types of patrons. “My motto has always been: Where family, friends, and fools come together to Miss Behave!” Grosse says.

Iconic Décor: Although Ain’t Miss Behavin’ has been stereotyped as everything from a gay bar to a biker bar, Grosse doesn’t like labels. A sign reads: “We are a PEOPLE BAR!” The bathrooms are worth a visit, with chalkboard walls and Marilyn Monroe pictures for women, pool hall décor for men.

Toys & Tunes: The jukebox belts out music until around 10 p.m. when nightly karaoke ensues. For those who aren’t blessed with amazing pipes or are just too shy to perform, two pool tables, a dartboard, pinball and Golden Tee Golf are also available for play.

Ask the Bartender: “I have a great staff; Becky is our most seasoned bartender.” She was named Orlando’s Hottest Bartender in 2016 by a local radio station, says Grosse. “She also sings karaoke while she serves up the meanest drinks in Orlando.”

Must-Order Item: One of those drinks includes Becky’s Booty Juice. Made of Three Olives Apples & Pears vodka, peach schnapps, cranberry, sour, and a dash of Sprite, it is the perfect blend of sweet and sour. 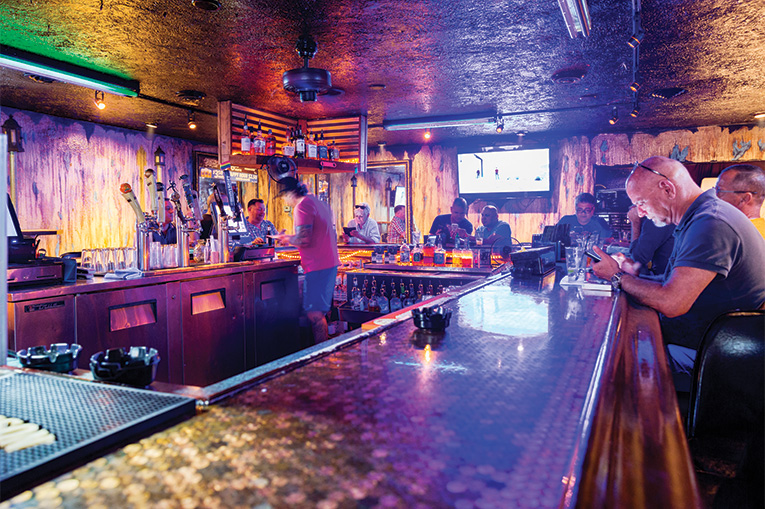 How It Started: This former ice cream parlor turned pool supply store turned bar is the spot for everyone—from local artists to 9-to-5ers looking for a cold one. “The crowd is the most diverse you’ll find in Orlando,” says Robert Henry Thompson, one of St. Matthew’s resident artists.

Iconic Décor: The bar itself is covered in pennies—$238 worth, to be exact. But what makes it even more special is the work of local artists that lines the walls and exterior. “Our art makes it fun to drive by for everyone, whether you come in or not,” says Matthew Fassl, the owner. As a nod to its former life as a pool supply store, the outdoor area and garden hold even more interesting finds below the surface: three filled-in pools and an entire Volkswagen Beetle. “The whole area is kind of like a treasure trove,” Fassl says.

Toys & Tunes: A jukebox keeps the music rolling, but the bar’s Tuesday Twisted Bizarre brings in music lovers who come for the traveling and local bands. Even better, there’s no cover charge.

Finishing Touch: Part of the seating area is composed of church pews painted by Fassl’s mother, depicting scenes from Chaucer’s Canterbury Tales. It’s not just about drinking at this little tavern, either: Every Sunday at 11 a.m., St. Dorothy Catholic Community offers an all-inclusive service.

Established in 1958 as Sportstown Billiards, this bar still rings true to its name as a mecca for gamers, with everything from eight pool tables and shuffleboard to cornhole, skee ball, air hockey, and hopscotch.

It’s hard to miss The Hideaway Bar, with one side of the building covered in art by Orlando’s own Andrew Spear. Miami Dolphins and Magic fans love The Hideaway as a place to catch their favorite teams while locals appreciate this Ivanhoe Village spot for strong drinks, the outside seating area, and the famous patty melts.

Since opening in 1954, Wally's Liquors has been a cornerstone of the Mills 50 District. Known for strong drinks and an eclectic clientele that includes blue collar workers, doctors, firefighters and lawyers, the whole town mourned the bar's sudden closing in August. Since then, new owners have taken over the property with plans to reopen in the new year. In addition to making much-needed renovations, insiders say the iconic character will remain intact, and an outdoor area is also in the works.