Now and then, some well-meaning person will try to give Celeste Headlee a compliment about her grandfather. It does not go well. They’ll say: “His music sounds just like George Gershwin to me.” And she’ll say: “Are you kidding me? It’s more like the other way around.”

Headlee is a writer, NPR commentator, and opera singer living near Washington, D.C.  Her grandfather, William Grant Still, was one of the first African American composers to create classical music in the first half of the 20th century. Born in 1895 in Little Rock, Arkansas, to two first-generation, free black schoolteachers, he began by crafting his own violins from scrap wood as a boy and would go on, in a career that took him to New York City and Hollywood, to become known as “the dean of African American composers.”

He was also party to another, more dubious first. That’s where Gershwin comes in.

Still belonged to the first—and certainly not the last—generation of African American musicians to routinely see their music appropriated, whole or in part, by white performers who turned it into mainstream success. A notorious example involves the opening chorus of a Gershwin song, “I Got Rhythm,” a vintage jazz standard first sung by a brassy young star by the name of Ethel Merman in Gershwin’s 1930 Broadway hit, Girl Crazy. 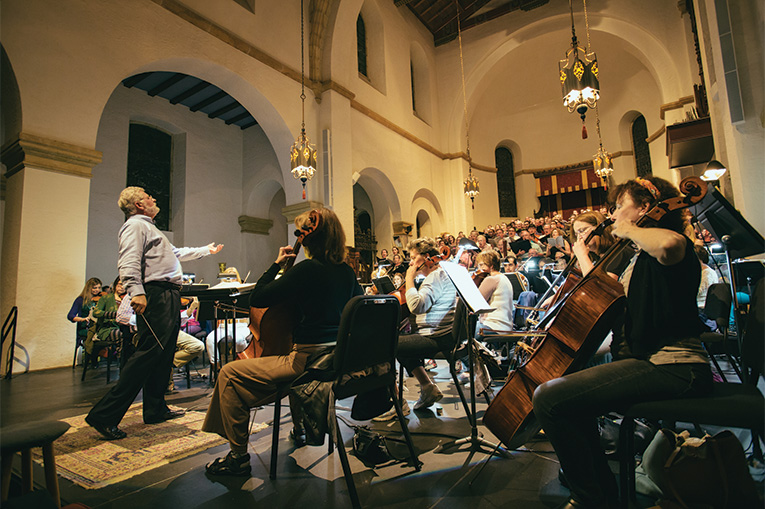 The belief among some classical music historians, and all of Still’s colleagues and family members, is that Gershwin “borrowed” that catchy, four-note theme after hearing its inventor, one William Grant Still, play it, as he often did, while warming up with his oboe as a pit musician for an earlier, long-running Broadway smash of that era, Shuffle Along, a Eubie Blake revue which was re-envisioned and revived on Broadway two years ago.

The soft-spoken Still never complained about the supposed theft. But in Afro-American Symphony, his groundbreaking fusion of blues motifs incorporated into complex symphonic conventions, he inserted the same theme at the beginning of the third movement, as if to wordlessly reclaim it as his own.

Headlee draws a measure of amusement and satisfaction from an old joke – if indeed it is a joke: “They used to say that Gershwin would go down to Harlem with a stack of dollar bills and walk around asking people:  ‘Hey. Could you hum that tune for me again?’ ”

Still is one of three pioneering and oft-overlooked African American classical composers whose works will be performed April 21 and 22 in a concert at Rollins College combining the Bach Festival and Bethune-Cookman University choirs. The concert, African-American Masterpieces: Symphonic Spirituals, is in observance of the 50th anniversary of the assassination of Martin Luther King Jr.

Like Still, both of the other composers, Nathaniel Dett and William Dawson, lived in a looking-glass world, honored for creating music in its loftiest forms while being treated as second-class citizens. They were keenly aware of a responsibility to challenge the patronizing racial stereotyping of the day by incorporating motifs from the blues and jazz—which were still dismissed by many as lowly, rough-hewn genres—into lofty classical compositions.

Dawson, best known as a composer for choral arrangements of African American spirituals, sold his bike for $6 when he was 13 years old and set off from his home in Anniston, Alabama, to the Tuskegee Institute, where he was eventually befriended and mentored by its founder, Booker T. Washington.

He also secretly earned a degree from the then-segregated Horner Institute in Kansas City, but was not allowed to take the stage at graduation for fear of upsetting the crowd. His Negro Folk Symphony, which debuted in 1934 with the Philadelphia Orchestra under the baton of Leopold Stokowski, will be performed during the Bach-Bethune-Cookman event.

Dett, born in Canada in a town founded by fugitive slaves, grew up to spend most of his musical career in the United States. He was dedicated to incorporating black spirituals into the classical concert tradition. His work will be represented in the concert by The Ordering of Moses, an ambitious oratorio fusing European romanticism with African American spiritual themes.

The oratorio was first performed in 1937 in Cincinnati, which had been a key way station in the Underground Railroad, one that Dett’s grandparents may have passed through on the way to Canada. The concert was a success, but, in an era in which white spirituals were accepted as part of the mainstream but black spirituals were not, a live radio broadcast was cut off because of listener complaints.

Of the three composers, Still was the most versatile, well-traveled and influential.

He taught himself to play the clarinet, saxophone, oboe, double bass, cello, viola and violin, which he used to serenade officers at mealtime after enlisting in the Navy during World War I.

He had a lifelong working friendship with W.C. Handy, an Alabama log cabin-born African American musician and composer who earned a title of his own, “Father of the Blues,” for helping to transform a regional genre—inspired, he liked to say, by “the sound of whippoorwills, bats, and hoot owls”—into a national phenomenon.

After moving to New York City, Still became part of the Harlem Renaissance, a surge of artistic and intellectual expression among African American professors, artists and writers. In the late 1930s, he was enrolled by two key figures in the movement, arts patron Charlotte Mason and Howard University professor Alain Locke, to compose the music for a defiant choral ballad, And They Lynched Him on a Tree.

It was originally performed by the New York Philharmonic in 1940, at a time when anti-lynching legislation was being considered by Congress. The ballad, which calls for two choruses, one white and one black, will be performed as part of the Symphonic Spirituals program.

Though family members say he rarely spoke of it, Still himself had seen a lynching in Alabama while traveling with a company of blues musicians. Over the years, nearly 200 anti-lynching bills were introduced in Congress. Southern politicians blocked them. None was ever adopted. 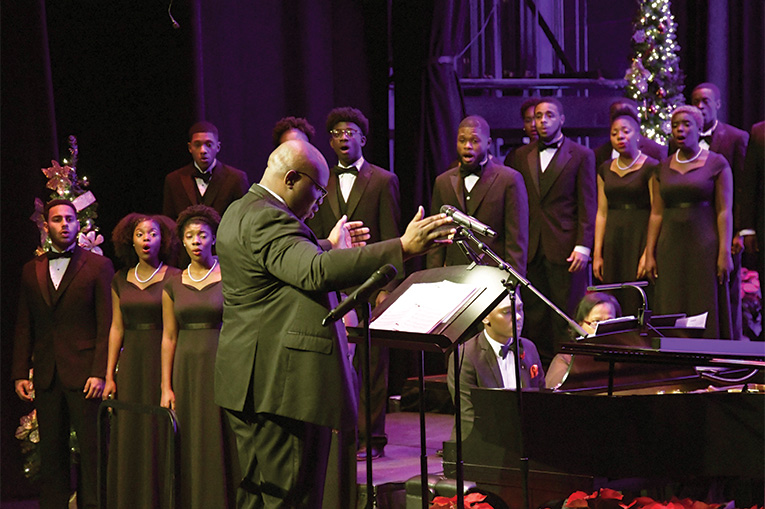 Still also collaborated with Harlem Renaissance writer Langston Hughes on an opera about a rebellion that ended slavery in Haiti. But though he was passionate about what he called his “race music,” one of his proudest moments was being chosen to compose the music to be played during the World’s Fair of 1939 in New York City.

In a letter to Locke, he wrote: “It seems to me that this must be the first time, musically speaking, that a colored man has ever been asked to write something extremely important that doesn’t have to be Negroid, and I must admit I can’t help to be proud of the distinction.”

He met and married Verna Arvey, a Jewish pianist and librettist. Because biracial marriage was against the law in the United States at the time, they had to go to Mexico to exchange vows.  They lived in a segregated section of what is now the Jefferson Park neighborhood of Los Angeles; one of their neighbors was Eddie Anderson, who played Rochester on Jack Benny’s radio and television comedy series.

Still’s daughter, Judith Anne Still, has fond memories of the visitors who would come to see her father in the home, from conductor Eugene Ormandy to actor Paul Robeson to Central Florida’s own Harlem Renaissance writer, Zora Neale Hurston.

While living in Los Angeles, where he would eventually retire, Still composed music for movies, including Frank Capra’s 1937 fantasy, Lost Horizon, and Pennies From Heaven, a 1946 film starring Bing Crosby.

His status as a musician with high-end, broad-ranging skills gave him entrée to upscale West Coast communities, often as the only person of color in sight. Once, a young boy who had obviously never see an African American before approached him, perhaps thinking he’d come upon a human being with chameleon abilities of some sort, and asked: “Can you turn green, too?”

Still’s work with the studios eventually evaporated, but not before he left one project after hearing someone, using a racial slur, wonder aloud what he was doing there.

He was awarded nine honorary degrees, but in 1947 arrived dog-tired to accept one at Oberlin College in Ohio, having found only one hotel, while traveling cross-country, that would rent out a room to him and his family.

“A policeman directed us to one place,” Judith Anne Still recalls. “It was a brothel. I remember it was crawling with bugs.”

She lives in Arizona, where she operates a small business sending out sheet music of her father’s works to orchestras and universities. When it comes to the musical legacy of her father, who died in 1978, she is fiercely protective. She says he came to her in a dream not long ago and told her that it was time for a movie to be made about his life.

“He told me I should write the screenplay myself. He said: ‘Don’t let somebody in Hollywood do it. They’ll screw it up.’ ”

Her dedication is mirrored, in his own way, by Dr. John Sinclair, the artistic director and conductor of the Bach Festival Society of Winter Park since 1990.

The concert is his brainchild. He’s been thinking about it for years. It represents a significant and symbolic departure for a choir that has focused mainly on performing oratorios by European composers since its founding, in 1935, to commemorate the 250th anniversary of the birth of Johann Sebastian Bach.

“I asked myself what kind of music, what kind of message, Martin Luther King would want,” he says. “There is no doubt in my mind that if these three composers were white, they would be household names.”

Sinclair is a dedicated student of music history. He has a hobby that dovetails nicely with that obsession: a vintage collection of the signatures of great composers.

Most are on faded letters, legal documents, notes and scores. There’s a John Philip Sousa autograph on a small card, neatly penned beneath a bar of music from his Stars and Stripes Forever. There’s a 19th century shopping list for groceries, signed by Gioachino Rossini—a source of amusement to Sinclair, who’s well-versed enough to know that the The Barber of Seville’s portly composer was something of an epicurean.

You could indulge in a silent, self-led tour of music history by sifting through the plastic laminated sheaths protecting the dog-eared scraps of paper that bear the fading signatures of musical immortals. Their works echo the joys and sorrows of ages past. Giuseppe Verdi is here. So is Arturo Toscanini. So is Giacomo Puccini. So is Camille Saint-Saens. So are Nathaniel Dett, William Dawson, and William Grant Still.

Featuring William Grant Still’s And They Lynched Him on a Tree, William Dawson’s Negro Folk Symphony, Nathaniel Dett’s The Ordering of Moses.