I’ve had the 1890s on my mind lately. Not long ago, I read an interview with comedienne Margaret Cho about how she and her husband considered themselves to be “steampunks": a subcultural movement that includes wearing Victorian and Edwardian garb (such as corsets, waistcoats, pocket watches) and a gothic fascination with machinery of yore.  Then, about a month ago while working on a fashion shoot for Orlando magazine, Lisa Smith of Orlando Vintage brought out some Victorian clothing she had aquired. She was smitten with its edgy incorporation into artsy kids’ wardrobes.
Well, gosh darn it: The New York Times published something about all this the other day. Turns out New York hipsters are so on this. 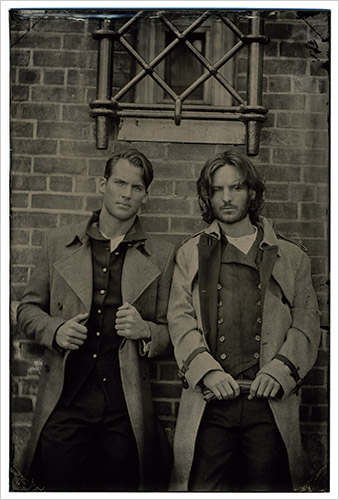 But there seems to be a similar movement here in the South. Have you noticed that it is cool these days to grow a Whitman-worthy beard? Just take a look at the indie scenesters here in town. On a recent trip to Savannah, Ga., I went into a lovely shop called The Paris Market & Brocante. Besides the charming Parisian bric-a-brac, the most interesting thing there was the girl behind the counter. She was so cool it hurt. She wore a long-sleeve black blouse with a huge lacy collar and a cameo pinned at the top. She also wore a long black petticoat, and old-fashioned boots. Tied around her waist was a long plain apron. With her shaggy hair and pale skin, she didn’t look like she was in costume but like an artsy SCAD (Savannah College of Art and Design) student, which she probably was.
A couple of seasons ago, Olivier Theyskens designed magnificent Edwardian-looking gowns for Rochas that may have been ahead of their time. 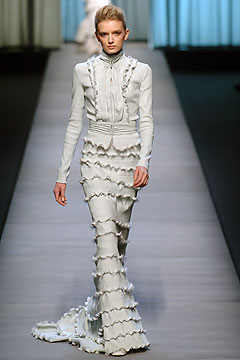 This brings me to my final musing on this. My 93-year-old grandmother passed away last year. Amongst the boxes and trunks she left behind, there was one filled with early 1900s waistcoasts, petticoats, gloves, hats and even a real bearskin coat (my family has lived in Northern Colorado for generations). My first instinct was to have my father donate it to a museum, but now I’m thinking about taking another look. It would be amazing to wear something over 100 years old that one of my pioneer relatives wore. And, if worn right, it could be very, very cool.