The new kid in town grew up fast. Here’s a look back at the stellar first year of the Dr. Phillips Center for the Performing Arts.

It’s been a year now. More accurately, a year and a month; 287 performances; 900 performing arts students in classes and camps; 22,000 volunteer hours logged and 2,200 professional actors, dancers, singers, speakers and comedians on stage to entertain more than 300,000 audience members.

The Dr. Phillips Center for the Performing Arts is the biggest show in town, and after all the decades of planning and debate, it didn’t take long to get there. Here’s a look back at some of the moments and milestones of Central Florida’s half-billion-dollar cultural showcase, along with a glimpse of what’s in store for 2016. 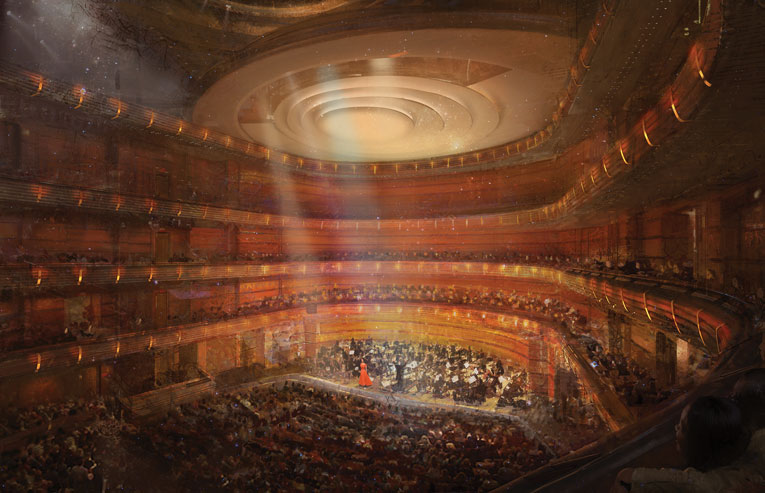 A rendering of the acoustic theater

Biggest Month: Whether it was great planning, beginner’s luck or both, a shock-and-awe February lineup included appearances by uber-diva Diana Ross, crooner Harry Connick Jr., celebrity chef Alton Brown and jazz trumpeter/composer Chris Botti; a two-man show re-creating all seven Harry Potter novels; a live-on-stage episode of the public radio current-events quiz show Wait, Wait, Don’t Tell Me; and Newsies, a Broadway musical about late 19th-century paperboys waging a crusade for higher pay. That last show was part of the Fairwinds Broadway in Orlando series, whose highlight this year will be Kinky Boots, winner of six Tony Awards for its 2013 Broadway run.

Classiest Performer: That would be Botti, who played the crowd just as subtly as he played his vintage 1940 Martin Handcraft Committee trumpet with the 1926 Bach 3 silver-plated mouthpiece when he performed with his band at the Disney Theater as part of the Jazz Roots series. He even doubled as house manager and audience educator at one point with a smooth but pointed comment directed at a group of latecomers whose timing couldn’t have been worse.

Botti has revered Miles Davis since boyhood, once saying of the legendary trumpeter, composer and bandleader: “He had the three greatest bands in history over the course of his career. I guess I’d put the Beatles in fourth place.” As it happened, Botti had just played a number made famous by his idol when the group filed into their front-row seats. He stood on the apron of the stage, trumpet in hand, and the theater fell silent as he looked down at them and said, ever so courteously:

“Welcome. Come on in. We’re not doing anything special. Just playing a little Miles Davis.”

Somehow, the boys in the band kept a straight face.

The jazz series, sponsored by Morgan Stanley, is back this season, highlighted by upcoming concerts featuring Patti LaBelle, Tony Bennett, and a Frank Sinatra tribute by Michael Feinstein.

Biggest drama: It didn’t exactly happen behind the scenes, but it did revolve around a stage that has yet to be built: a finely tuned, 1,700-seat hall, which was to be the setting for a broad range of private events and acoustical performances—and that included being home base for the Orlando Ballet and the Orlando Philharmonic Orchestra. Because of a funding lag, construction of that third theater was postponed, temporarily stranding two of the city’s most important cultural institutions when the center opened without it, which was something like buying an expensive state-of-the-art stereo system and coming home with only one speaker in the box.

The issue prompted a philanthropic power couple, Chuck and Marjorie Pabst Steinmetz, to provide a high-end kick start toward building the acoustic theater. Their $12 million donation, combined with other public and private donations, put the center within reasonable reach of the third hall’s estimated $185 million price tag. Construction is now slated to begin next year, with a hoped-for opening in early 2019.

Other than the nerve-rattling speedbump over the acoustic theater, the dollars and cents came out extremely well for a first-year operation. The nonprofit center had set aside a $2.2 million contingency fund in case revenue did not offset operating costs. As it turned out, that was unnecessary. According to a preliminary budgetary analysis, the center not only broke even but made a modest profit.

The view from here: How wonderful it was as you dressed in your finest, sipped a glass of wine and stood on the second-floor terrace of your city’s elegant new performing arts center looking out at…a big pile of dirt. It took months to clear the debris left over from the demolished “Round Building,’’ though the cityscape view through the center’s glassy façade was breathtaking just the same. It was a bit more serious when the people in the million-dollar seats inside wound up with the lousiest view in the house. For some touring shows, the sound equipment and scenery obscured the view from the balcony seats on either side of the Walt Disney Theater’s stage. Tragedy averted: When patrons complained, the Dr. Phillips staff simply arranged for them to be seated down front. 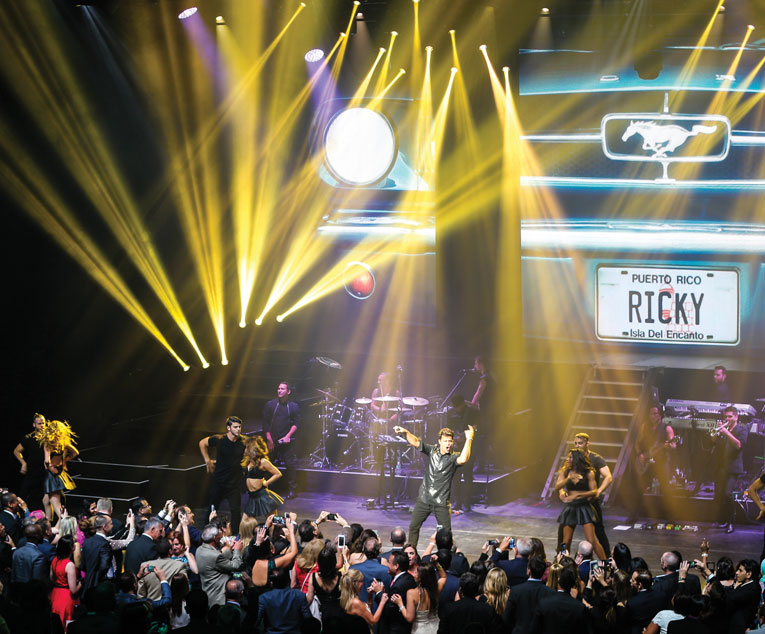 Unsung heroes: A lot of people who do good work at the performing arts center operate out of the spotlight. Sometimes that even includes performers. Kevin Spencer slipped in and out of town quietly but made a huge impact on a special-needs audience during the few days he was here. Spencer is a hybrid—part educator, part magician, with a “sensory-friendly” show that is compatible for young people with learning disabilities. For families who have children on the autism spectrum—children who can go into a panic when they must filter the sights and sounds of a public outing—it was the biggest show of the year, in some cases the only show of the year, as they enjoyed being with their children at a performance tailored to their needs. Spencer followed up his “Theatre of Illusion’’ show with a “Hocus Focus” workshop that teaches motor skills. He’ll be back with a return “Hocus Focus” engagement next April.

The center’s educational staffers also supported a stage production written by and starring students with special needs, and created a video geared toward helping developmentally challenged students learn how to adapt to social settings. The efforts were validated when the director of education, Dana Brazil, won the 2015 award for Outstanding Achievement in Education and Engagement from the Broadway League in her first year on the job.

The center is committed to this sort of work for the long haul. The connection between art and well-being is permanently imbedded in the performing art school’s DNA, thanks to an innovative partnership with Florida Hospital to explore how the arts can be incorporated into healing in a broad range of therapeutic settings for young and old.

Best free concert: The Young Composers Challenge, an annual, afternoon-long, Star-Search-type competition, brought seven teenage composers to town from all over the country and put them on stage with a professional conductor and an orchestra so they could hear their compositions. It wasn’t just a fantasy camp for the young protégés, but an opportunity just as rare for the audience of devoted music lovers, who got a candid, insider view of how a musical team—the conductor, the various sections of the orchestra, and the composer—made the pieces come to life. There was even a bit of audience participation involved as maestro Christopher Wilkins turned to the crowd now and then, like a solicitous maître d’, to see if they’d like a bit more vibrato here, a little less oboe there.

The name game: If you’re stubborn—if you’re the kind of person who still calls the hometown newspaper the Sentinel-Star— you’re going to keep on referring to the center itself as DPAC. That was shorthand for the Downtown Performing Arts Center, which is what the complex was referred to in the planning stages. The officially preferred shorthand is now the Phillips Center. In case you’re keeping a scorecard, the roll call of various private and corporate donors and partners whose donations are recognized with naming rights grew throughout the inaugural year. The third, acoustic theater will now be called Steinmetz Hall. The center’s performing arts school is now The Dr. Phillips Florida Hospital School of Arts and Wellness. The entranceway for performers, staffers and guests is now the Tupperware Brands Lobby, thanks to a million-dollar gift from that company. The Ravago Terrace Bar is so named in honor of another million-dollar gift, this from a Belgian firm that manufactures plastics products. Other names to know, all connected to major corporate or private donors: the Seneff Arts Plaza, the DeVos Family Room, the Walt Disney Theater, the Alexis & Jim Pugh Theater, and the Harriett’s Ladies Lounge, in honor of philanthropist Harriett Lake.