A New Kitchen With a French Flavor

A high-end remodel transforms a staid 1990s kitchen into a stylish space in which to entertain and cook for family and friends. 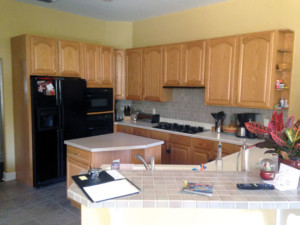 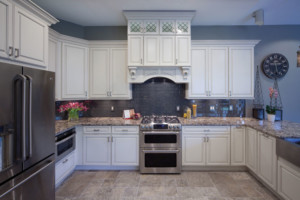 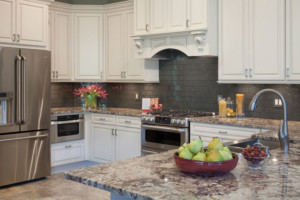 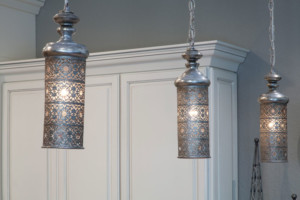 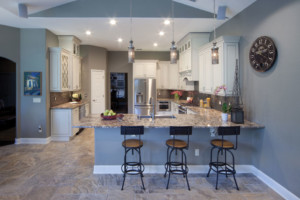 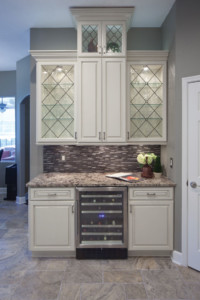 When Dan Travis and Steven Hurrell moved into their north Orlando home last year, they planned to do some remodeling to make it their own—in particular, the kitchen. The house, built in 1998, had the original kitchen design, “so it was dated and ready for some TLC,” Travis says. The couple’s big-picture perspective included an open concept that would feed into their family room and roll out to their pool and patio. They also wanted the new design to incorporate elements of their many travels to France. Travis and Hurrell hired Winter Park interior designer John McClain to help them achieve the desired look.

McClain kept the basic outline of the kitchen without removing any walls, but everything else was changed—the flooring, paint, cabinets, appliances and lighting, as well as a small center island. “I wanted to keep that area open for traffic flow and to keep the work triangle uncluttered,” McClain says. “In a small kitchen, an island is not a necessary component and sometimes can be an obstacle.” To compensate for the loss of counter space, he enlarged the countertop around the sink. “I used Bianco Antico granite—it’s the perfect granite for homeowners who want a high-end look, but don’t want to break the bank.”

Travis and Hurrell gained even more counter space when McClain reassigned the stovetop and ovens into the center of the longest wall with an all-in-one double oven and range. The move also created a new spot for a microwave drawer. The result: All of the appliances look uncluttered and aligned.  “Symmetry was important in this kitchen renovation,” notes McClain.

“Dan and Steven mentioned their love of French Country,” he says. “So I suggested an updated design that would be a modernized kitchen with the essence of French Country.” Everything from the Silverado travertine floor tiles laid in a “Versailles” pattern to the leaded-glass cabinet doors tastefully reflects a contemporary French style without being overwhelming.

McClain used traditional-style cabinetry in an off-white shade with a gray opaque glaze to give the new cabinets a look of antiquity. “The glass detail in the upper cabinets lends a custom look to stock cabinetry and adds visual interest,” he says. It also gives the homeowners a chance to showcase their collection of crystal barware. McClain emphasized the kitchen’s high ceiling by extending the center portions of the upper cabinetry, which added a bit of drama.

For the backsplash, a gray glass subway tile was chosen for the workable area of the kitchen. “The shiny glass adds a contrast between the traditional cabinetry and the matte finish of the travertine flooring,” McClain says. For the “entertaining area” above the wine refrigerator, he used interlocking porcelain and stainless steel horizontal mosaic tiles. “Basically, the subway tile will make you breakfast, and the mosaic tile will make you a drink,” he adds, with a grin.

A specific request of the homeowners was for a farmhouse-style apron sink. McClain was able to find a stainless steel version with a slightly curved front, giving this traditional-looking sink an updated twist. The Delta gooseneck faucet is functional and sculptural.

McClain made certain that lighting was both practical and beautiful. In addition to adding new recessed lighting, as well as over- and under-cabinet lighting, he chose three Moroccan filigree pendant lamps to add another layer of texture and depth to the kitchen. “They cast the most amazing light through the perforated sides; they are the jewelry of the room,” he says.

For the finishing touch, McClain used a mixture of the homeowners’ accessories, plus some new ones. “The small addition of the rose and burgundy-colored accessories brings out the various shades of the countertop, while softening and breaking up all of the gray tones,” he says. “I didn’t want the kitchen to be completely monochromatic, so these accents are an easy way to add color, variety and interest.” The rustic, utilitarian barstools add an organic component. “I introduce something organic to every design to bring life to a space.”

The kitchen remodel took about four weeks to complete, at a cost of $58,000. “The updated cabinetry, modern color palette and finishes gave the room a fresh, yet comfortable look,” says McClain. Overall, it’s a dramatic, positive change from the original, and now the homeowners have a stylish, comfortable space where they can entertain family and guests.

“This is our dream kitchen,” says Travis. “The renovation gives us the space and functionality we wanted, while providing the high-end finish we desired. It also brings us back to the French feel that we hold dear.”

Giving Back and Saving Money
Since the kitchen was original to the house, “the cabinets were the usual culprit of bad 1990s design—oak—and the countertops were Corian,” says McClain. But they were in good condition, so rather than trash them, the homeowners decided to donate them. McClain learned that Habitat for Humanity would come out to remove the old cabinetry, countertops and appliances. Travis and Hurrell were able to support the organization by making a donation, and they got a tax deduction.

This article appears in the October 2014 issue of Orlando Home and Garden.
Categories: Makeovers