How Gabriel Preisser creates opera that is accessible and relevant in the 21st century. 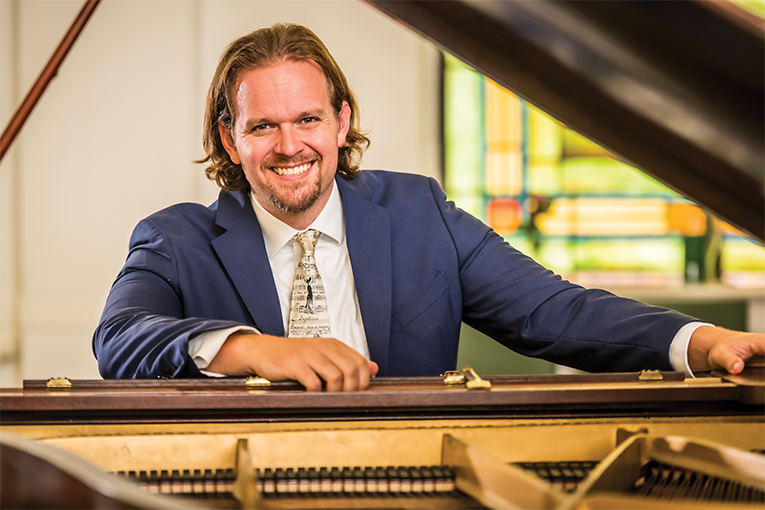 We all have aspirations and dreams growing up. The fortunate ones have nurturing parents who push the right buttons. Gabriel Preisser is one of those fortunate ones.

To understand Preisser’s world today, you need to go back to his days at West Orange High School, where he was the kid who sang the national anthem wearing football pads prepping for a game.

Preisser’s musical muse would eventually win out, a contrarian approach for a kid who grew up as the youngest in a household of five boys and one girl, most with a sports-leaning attention span.

“I always thought that I was going to go to Florida State and walk on and play football,” he said. “Florida State was the team back then. It was early 2000s. Luckily, I got a music scholarship and I did not get killed, although my football dreams got killed.”

Over the years, the music plays on. As CEO and general director of Opera Orlando, Preisser faces the daunting task of making opera appealing and accessible to all. Opera gets a bad rap, much like broccoli on the dinner table.

Preisser fully acknowledges those challenges, but instead of force-feeding that musical brand of broccoli, he has come up with creative ways to give it a sexier appeal.
“That stereotype is very much out there,” he said. “And it’s kind of our mission to, no matter what production we’re doing, to make opera accessible, make opera relevant.”

At 38, Preisser brings the right mix of experience and youthful exuberance to Opera Orlando. He wears the proverbial two hats, as artistic director and a performer with a rich baritone vocal range.

Preisser has more than 50 operatic and musical theater roles to his credit. People have noticed. He has been praised by Opera News for his “handsome voice, charismatic energy, and timbral allure.” The New York Times called his performance as Lt. Gordon in Kevin Puts’s Pulitzer Prize-winning “Silent Night,” “wonderful.” He has also picked up a Grammy along the way.

But his focus these days is very much on the business side. Along with a name change (formerly Florida Opera Theatre), the company has seen a significant uptick under Preisser’s charge. The company jumped up over the $2 million mark in revenue this past season, a significant bump from the $1.2 million mark the previous year.

Of course, a nasty spell of COVID-19 impacted those numbers (although Florida remained open for business during much of that time), but still, there is a palatable difference in the way Opera Orlando is doing business these days.

“I think my muse and my inspiration has been this community,” he said. “In many ways, getting to come back home and do something, create something, grow something in the community where I grew up is very satisfying, it’s very fulfilling.”

There’s also a nice family artistic vibe at Opera Orlando. Grant, one of his brothers, is the artistic director.

“It’s a passion for both of us,” Grant said. “Our skill sets balance. We are very much in sync in terms of what we like about opera. It is everything I love about the arts all wrapped up into one. I love the complexity of it. And it’s a true collaborative art form.”

He was hooked from the get-go.

“I kind of saw it as music theater on steroids because there’s no microphone,” explained Gabriel. “So you have to learn how to belt out and project your voice, have to learn this unique technique.”

It all dates to his formative years growing up in Apopka as a son of educators. His mom required all the children to take up an instrument. Preisser chose piano, but he found his voice to be his most powerful instrument.

It has served him well. Preisser’s rich voice has allowed him to travel throughout the country. His musical soundtrack includes leading-man roles for various companies, including Minnesota Orchestra, Colorado Symphony, and Opera Tampa.

But his most significant mark is the Grammy that hangs on his mantle. He won it in 2020 as part of a team honored for best opera recording category for “Fantastic Mr. Fox,” a 1998 opera. Preisser missed the awards ceremony in Los Angeles because he was performing “Silent Night” in Salt Lake City. He found out backstage just before the performance.

The Grammy from The Academy of Arts and Sciences was mailed to his home. “My kids open it up and they’re like, ‘Oh daddy, I didn’t know you were a scientist.’”

Gabriel and his wife Christina have two children: Grayson, 8, and Cora, 5. They met in high school while both were involved in theater. She went on to become a nurse, giving Gabriel a stable foundation “to pursue this crazy opera theater career.”

They live in Winter Garden now. Central Florida still has the comfy cozy feel of home. All those business trips throughout the United States with one coming up for a performance in Italy, remain nice perks.

“It’s one of those things where as long as people still want to hear me sing or they still enjoy the productions that we’re doing here, I’ll do it for the rest of my life,” he said. “I just love it.”

This article appears in the November 2022 issue of Orlando Magazine.
Categories: Performing Arts
Tags: Gabriel Presser, in focus, Opera Orlando, performing ards
Want to read the whole issue? Download and read this issue and others on Magzter.