A Hunger for a Better World

The top of an oak dining room table hangs on the wall at the Longwood headquarters of Feeding Children Everywhere, a family's memories carved into its grain. The tabletop is an enduring representation of the charity's values of family, community, the power of a shared meal, and what happens when people come together to combat hunger.

It is this tabletop, belonging to founders Don and Kristen Campbell of Sanford, that provided fodder for the launch of the Longwood-based worldwide hunger organization in 2010. That was roughly 62 million meals ago.

“He was a part-time youth pastor in Sanford, so he always had people over.  He would invite people who didn’t have food from his neighborhood. They would eat around this table,” explains Dave Green, who took over as CEO in 2016 when Don Campbell stepped aside into an advisory role.

The 2010 earthquake in Haiti moved the Campbells to action, and Feeding Children Everywhere was born. The concept is simple: Partner with corporate sponsors to provide a nutritious, protein-rich meal that can be sent anywhere in the world at a cost of 25 cents a serving. The secret is to use a free labor force of diverse volunteers with a common cause.

A large bay on the other side of the reception area comes alive for a monthly event as 300 volunteers—parents and children, millennials, students and baby boomers—form assembly lines to pack meals of lentils, rice, dehydrated vegetables and Himalayan sea salt. Energetic music booms, people dance and laugh, and teams compete to see who can package more meals. The goal for the day: 40,000 meals, all designated to meet emergency needs.

Event lead Krystal Rivera, a bubbly 23-year-old, cheers on the rows of free laborers, many of whom repeatedly give up weekend mornings or evenings to serve at the monthly on-site hunger projects, events where meals are packaged.

“These meals could end up on plates as early as tomorrow evening or in six months, depending on the need, whether it’s kids who are declared homeless in the school system or a local church or even Haiti or Hong Kong,” Rivera says.

She and six other event leads oversee hunger projects around the world. They range from team-building events at companies to projects held overseas—in areas such as London, Hong Kong or parts of Africa—to simplify worldwide distribution.

“I think it’s important you take everything you’ve been blessed with and pay it forward,” Lane says. “This is important to me. As a child, I grew up in the late ‘50s and early ‘60s. There were times when we didn’t have food growing up. Anything I can do to make a difference to help, I’ll be there.”

Sometimes those who show up to pay it forward end up on the receiving end. Green says, “We’ve gotten people who will show up at a church hunger project and say, ‘This is my second year of packaging meals. But I have to tell you, this time last year I was living in my car. I lost my job. My family didn’t have food. I took some food from you last time. Now things are great.’ Even somebody who’s struggling right now can be part of the solution.”

Bob Kyle, an owner-operator of Chick-fil-A restaurants in Winter Springs and Orlando, has hosted a dozen hunger projects with his team members, resulting in about 236,000 packages toward a goal of 1 million meals.

“The day of the event is a blast,” Kyle says. “We create a high-energy, fun atmosphere with a DJ and the Chick-fil-A cows dancing and cheering on the participants. Young and old alike high five each other as another box is filled and sealed for shipping to hungry children locally and around the world.”

Originally focused on international needs, Feeding Children Everywhere now is more focused on U.S. food deserts—communities like Parramore in Orlando. In November, it launched a “Fed 40” app, available free through the App Store and Google Play.

“It essentially empowers somebody who lives in a food desert to go online or go to the mobile app, and they can request meals by just filling out a form, and within a business day, a package of about 40 servings of our healthy meals shows up at their front door,” Green says.

The service, available locally, will eventually be available in 25 U.S. food deserts, some of which will be home to new regional offices for the charity. But the end goal is to decrease demand for meals as communities are built up and empowered with resources such as community gardens and grocery stores.

Next Steps
If you want to host a hunger project as a team-building exercise or charity event, or to volunteer at a hunger project, visit feedingchildreneverywhere.com. To speak to a Feeding Children Everywhere representative, call 888-891-6447. If you live in an Orlando-area food desert, you can download the “Fed 40” app from the App Store or Google Play.

A good time Giving Back 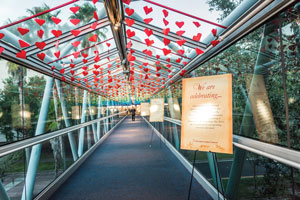 Orlando magazine’s Generocity aims to build a bridge between individuals and nonprofits.

Call it a “Party With a Purpose.’’

Orlando’s inaugural Generocity event, sponsored by Orlando magazine, promises to be a night of food, fun and celebration—as in celebrating the dozens of local nonprofit groups that make a difference in countless lives.
The event, scheduled for April 26 at the Orlando Science Center (photo above), is geared toward connecting young professionals with nonprofits looking for their support and involvement. It promises to be a fun evening of learning about how to give back in areas ranging from feeding the hungry to helping with children’s causes.

“You’ve never been to a party like this before,’’ says Catherine Walters, marketing and circulation director for Orlando magazine. “We are taking a unique approach to connecting nonprofits with eager Orlandoans.”

Generocity Orlando, which runs from 6 to 8:30 p.m., will feature delectable cuisine from Central Florida restaurants and food trucks, along with specialty cocktails and live entertainment. Among the sponsors are Unicorp National Developments, Masters Realty and the Orlando Science Center.

For additional information or to purchase tickets for Generocity Orlando 2017, go to www.orlandomagazine.com/generocity