For LGBT youth who face rejection because of their sexual orientation, the Zebra Coalition offers real-world support.

Mark I. Pinsky,
Tony Shamro has had many challenges in his 21 years. Some were familiar and common, like frequent family moves and parents who divorced when he was 4. Others were of a different magnitude: a cleft lip and palate from birth, requiring 13 jaw and facial surgeries, and years of bullying in school because of the way he looked and spoke. And, from the time he was 6, knowing that he was gay. Through it all, his optimistic, resilient personality kept him going. After he graduated from high school—where he started a club to educate others about people with cleft palates—he took theater courses at Seminole State College. But in the last year, a relative he was living with became angry when he reached out to others for support, and threw him out.

Fortunately for Shamro, and other Central Florida young people who have been bullied or made homeless because of their sexual orientation, there is a safety net—and a newly refurbished one at that. Since last December, the Zebra Coalition House at 911 N. Mills Ave. has provided an afternoon drop-in center, mental health and drug counseling, educational and employment support, and a 24-hour crisis hotline (1-877-90ZEBRA/1-877-909-3272). Most critically, it provides six beds off-site for short-term housing, and referrals for others who need a place to stay.

The renovated 1,400-square-foot, two-story headquarters, with five full-time staffers and professionals from a variety of social service providers, includes bright areas for lounging; laundry, shower and kitchen facilities; as well as a computer center and counseling rooms for intake and assessment sessions. 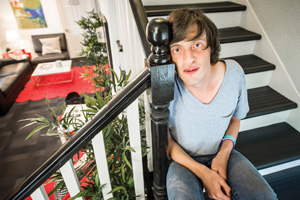 “It makes me feel like I have a family that accepts me for who I am,’’ Shamro says of the organization. “It keeps me on the right track. It motivates me. I see a very bright path.’’

The idea for the coalition came from Jefferson Voss, senior director of the Tavistock Group, and Dr. Philip Toal, of the Center for Drug Free Living, in 2008. It was officially formed in 2010, its sponsors say, in response to a growing number of lesbian, bisexual, gay and transgender youth, ages 13 to 24, experiencing homelessness, bullying, physical and sexual abuse, and isolation from their families. The network was joined and supported by area government agencies, public schools, colleges and universities, and social service providers, including the Coalition for the Homeless and Harbor House of Central Florida.

Rather than using the more familiar rainbow associated with gay pride, the Zebra name and logo were seen as a more neutral symbol. “We work with youth of a different stripe,” quips Dexter Foxworth, the coalition’s director, who is a former event management consultant for Disney and Cirque du Soleil.

There is clearly a need for such a group for members of the LGBT community. National studies show dramatically elevated rates of suicide, homelessness, alcohol and drug abuse among youths in the gay community. 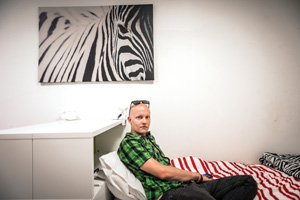 Nicholas Mele, 22, was headed down that road—jobless, homeless and addicted to heroin. After in-patient detox, he landed at the men’s residence at Orlando’s Center for Drug Free Living. There, a counselor felt that given his age and sexual orientation, as well as his apparently serious intent to change his life, Mele would be a good candidate for the Zebra Coalition House. Fortunately, the staff agreed and there was a bed available.
So far, it has been a good match. Mele goes to AA meetings seven evenings a week, and is comfortably ensconced in his small,
simple IKEA-designed room with his roommate, keeping it clean and taking turns doing the laundry. He spends his days looking for work and participating in an array of support and counseling groups at the Mills drop-in center. A high school graduate, Mele says he would like to attend college to study physical therapy for children.

The Zebra Coalition, he says, “has given me a certain amount of structure and accountability. I don’t wake up sick anymore and I don’t wake up worried about what my next move is going to be.” From the staff and peers, he says, “I feel the love. They care about me.”

The Mills house has had some fortunate timing, opening its doors just when there appears to be a sea change in America—and Central Florida—in attitudes toward the LGBT community, from church membership to gay marriage. Exodus International, the Orlando-based organization dedicated to “reparative therapy,” which claimed to be able to change sexual identity from gay to straight, announced with an apology last summer that it was closing its doors, admitting that it was misguided. 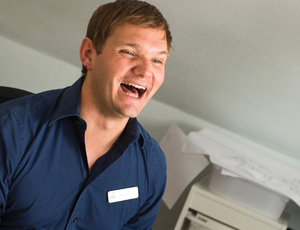 “More people know somebody in the gay community—a friend, a family member or a co-worker—which makes it more of an emotional connection,” says Scott Bowman, chairman of the board.

Funding for the coalition has come from a variety of sources, chiefly a $500,000, eight-year grant from the Bryce L. West Foundation, and $50,000 from the City of Orlando. But support has also come from corporate heavyweights like Disney, Universal, SeaWorld and the Orlando Magic, as well as from local groups like the Metropolitan Business Association, in the form of cash, in-kind and volunteer support. IKEA Orlando provided $10,000 worth of furnishings and design services, while Microsoft in The Florida Mall donated electronics, including laptops, tablets and Xboxes.

Not everyone who comes to the Zebra Coalition is there because of a disastrous situation. “We do receive calls on our hotline and drop-ins at our center from youth who do not have supportive families,” says Foxworth. “For them, we try to assist with planning conversations with their families, and we will work with their school counselors and at times make attempts to meet with their family members. We also focus a lot on safety planning with these youth as we know coming out to non-supportive family and friends can at times lead to violence and abuse.”

The coalition has also developed an anti-bullying campaign for middle and high schools in the Orange County system, providing anti-bullying posters and community resource posters, and offering prevention education for faculty, counselors and others in the school system.
From the schools to the streets, the coalition has in the last 10 months had 2,000 young people visit the house, while serving 5,000 individuals through resources, street outreach, the hotline and prevention education.

For Tony Shamro, there is no question that the group is fulfilling its mission. Most days he is out looking for work, volunteering in the community or participating in Zebra Coalition activities. In April, he testified at a Lake County School Board meeting in support of gay-straight alliance clubs in middle schools. He knows he can succeed in life: “I’m not going to let anyone stand in my way.”

This article appears in the November 2013 issue of Orlando Magazine.
Categories: Community