Rural yet refined, Tallahassee is a town of many faces.

Does Tallahassee make you think of buttoned-down senators and stately government buildings? That’s partly true, but our capital isn’t all work and no play. With Florida State University and Florida A&M, demographically it’s the state’s youngest city. And as any parent knows, you can’t keep youthful energy down. It bubbles up in craft breweries, sizzles in food trucks, and riffs in rock clubs. It grabs attention in art districts and frolics among natural wonders.

“Tallahassee’s redevelopment is connecting the universities to a revitalized downtown and entertainment district. In the process, it’s becoming more pedestrian- and bike-friendly,” says Byron Burroughs, founder of Proof Brewing Company, located midway between both college campuses. 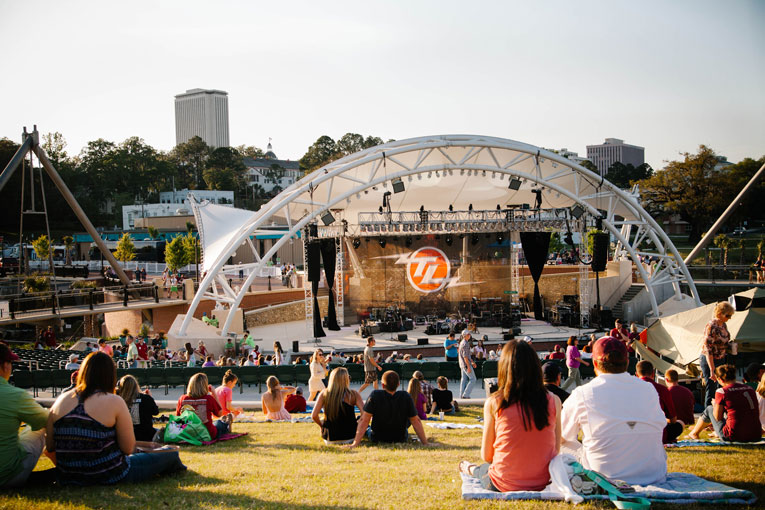 Cascades Park is a hub for Tallahassee’s lively music scene.

Unlike many cities, Tallahassee hasn’t abandoned its agrarian roots in its quest for sophistication. You can sip martinis with city folks at a rooftop bar or gossip with good old boys on a country store’s weather-beaten porch. Politics prevail in the capital, but rural landscapes keep it real.

Established in 1824, Tallahassee means “old fields” in the language of the native Apalachee Indians. Located on a trade route between St. Augustine and Pensacola, it was a natural choice for the state capital.

Depending on your tastes, you can approach this destination from several angles: historical, cultural, musical, natural, or all of the above. If you stay downtown, start your capital city countdown at the Chain of Parks. On Saturday mornings, the Downtown Marketplace draws artists, crafters, musicians, farmers, and food vendors.

In this city of parks, Cascades is a star, with fountains, cultural events, and light shows on weekend evenings. Take a picnic or dine at The Edison, the city’s hottest new eatery. Find politics distasteful? The sandwiches at Andrew’s Capital Grill & Bar will change your mind. They’re named after legislators, many of whom lunch here.

Nearby, the Florida Historic Capitol Museum journeys through the state’s political timeline from 1824-2000, with a restored 1911 Supreme Court Chamber and governor’s office. Standing in graceful contrast to the current 1970s-era capitol towering over it, the iconic old capitol building still hosts gubernatorial inaugurations.

To explore Tallahassee’s origins, visit Mission San Luis, Florida’s only reconstructed Spanish colonial mission. The dusky interiors of the Apalachee council house and Franciscan church are cocoons of quiet in this college town. They deepen your understanding of Florida’s earliest residents, as do the fort and colonial homes.

Musing about simpler times, you may dread returning to the modern age. Don’t worry. A time capsule known as Goodwood Museum & Gardens awaits. Cell phones seem superfluous on this 19th-century estate sequestered among live oaks and gardens. You’d agree to wear a hoop skirt if it meant lazing away each day sipping bourbon on the porch. Inside, Goodwood feels like a Left Behind episode where the occupants suddenly vanished. The possessions of five families still remain. 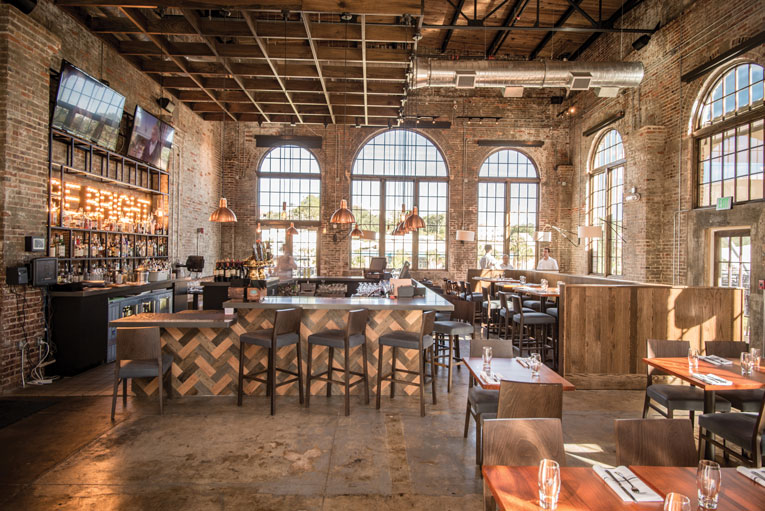 The trendy Edison restaurant is housed in a restored 1920s electric plant.

Like any self-respecting college town, Tallahassee has a lively music scene. The free Rhythm Route Trolley runs Friday-Saturday, 6 p.m.-2:30 a.m. Relax—it’s not all keggers and kids, however. FSU’s College of Music brings classical and jazz artists to local venues. For a dose of Delta, hunt down Bradfordville Blues Club, Florida’s only spot on the National Blues Trail. Bring a full tank of gas and a sense of adventure to find this backwoods juke joint.

The “BBC” is off Centerville Road. One of nine tree-canopy roads, it leads to another Tallahassee tradition. Since 1927, Bradley’s Country Store has been a destination for wood-smoked sausage and grits so rich they’d beat pudding in a creaminess contest. As Bradley’s employee Tyrone Morris drawls, “There ain’t nothin’ quick about ‘em.” He’s talking about the grits, but could be describing the carefree feeling you get just sitting on Bradley’s front porch.

Can’t bring yourself to leave the wide open spaces? Pick up a paddle and kayak Wacissa River, a scenic 15-mile waterway south of town. Teenagers in tow? Let ‘em fly tree-to-tree on Tallahassee Museum’s zip line while you stroll a nature boardwalk. Living on Tally time, you’re relaxed and recharged. And isn’t that what travel is all about?

One part country, one part cosmopolitan, Tallahassee is a getaway for travelers of all tastes.

Mad Men fans will enjoy Hotel Duval, a restored 1950s-era establishment. The minimalist interiors and rooftop bar recall Don Draper days. Prefer a Downton Abbey vibe? Check into The Park Avenue Inn, a gracious yet comfortable mansion. Both places are walking distance to downtown restaurants, attractions and a short drive to activities outside of town.

Tallahassee’s dining scene is surprisingly diverse, encompassing everything from food trucks and neighborhood cafés to elegant eateries. The city’s proximity to farmlands and the Gulf of Mexico inspires many chefs to create menus around the region’s rich resources. Gulf shrimp paired with Bradley’s grits is a staple on many local menus.

The comprehensive information at visittallahassee.com helps maximize your Tally time. Locate nature trails at trailahassee.com and tap into events at tallahasseearts.org. For FSU campus tour information, go to visit.fsu.edu