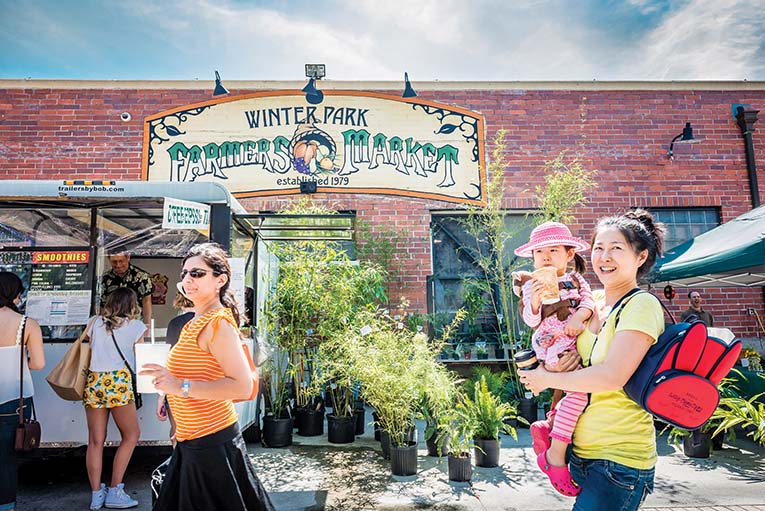 A delicate balance of old and new defines the Winter Park of 2020: seasoned residents who have lived here for decades with an appreciation for the town’s historic offerings and young families moving in with bright ideas about its future.

Looking back, one could say that Winter Park was well planned—a timeless design—as it made its transition from a frontier settlement that began in 1858 to a winter resort attracting wealthy Northerners, and now a vibrant neighborhood, rich with culture, entertainment and community spirit that’s coveted by both residents and visitors.

In the late 1880s, real estate tycoons Loring Chase and Oliver Chapman along with civil engineer Samuel Robinson created a town plan, starting with a park and main street for commercial real estate. A railroad passenger depot, an emporium and a hotel were among the first structures to shape the town. And to this day, a railway that serves Amtrak and SunRail runs through the heart of Winter Park and the depot sits on the edge of Central Park, home to a rose garden and a fountain topped with a bronze peacock (the city’s symbol). The downtown, including its main street now known as Park Avenue, became a hub that welcomed a bakery, watchmaker, icehouse and blacksmith. Today its tenants are trendy restaurants, sidewalk cafes and fashionable boutiques.

Pristine lakes—Maitland, Killarney, Osceola and Virginia—dotted the area along with fragrant orange groves. Homes were constructed and actually painted, which wasn’t the norm in Florida at the time, but definitely set a stylistic standard for Winter Park, one that is still embraced by today’s residents.

For Heidi Gearhart, who moved from Gainesville to Winter Park last March, it was that attention to style and architecture that convinced her to live here. “I love unique architecture and in many Florida towns all you see is the same stucco houses when you walk through the neighborhoods. That is not the case in Winter Park. It feels like you are in a town from the Northeast with traditional, contemporary, Tudor and many more styles built. Some old and grand, some new and sleek. Every street is different,” she says.

Education became another pillar in the formative years of Winter Park. In 1885, the Congregational Assembly of Florida started Rollins College, now considered the oldest institution of higher learning in Florida. Its lush campus on Lake Virginia boasts Mediterranean-style architecture and shady oak trees. A hub for culture and learning, Rollins serves the community as well as the student body and is home to the Cornell Fine Arts Museum and the Annie Russell Theatre.

In 1935, the Bach Festival Society of Winter Park was founded at Rollins College and still maintains a partnership with the school; musical performances are held in the historic Knowles Memorial Chapel. In 1942, Jeannette Genius McKean founded the Charles Hosmer Morse Museum of American Art in a tucked-away gallery on Rollins’ campus. She named it after her grandfather, a Chicago industrialist who maintained a seasonal home in Winter Park and advocated for the preservation of the town’s charming character. The museum moved in 1995 to its present Park Avenue location, where a collection of Louis Comfort Tiffany glass art is showcased.

Although the early years of the 20th century may have been the beginning of Winter Park’s cultural focus, it only grew stronger with modern times. For example, the Winter Park Sidewalk Art Festival that debuted in 1960 is now one of the city’s most popular signature events. 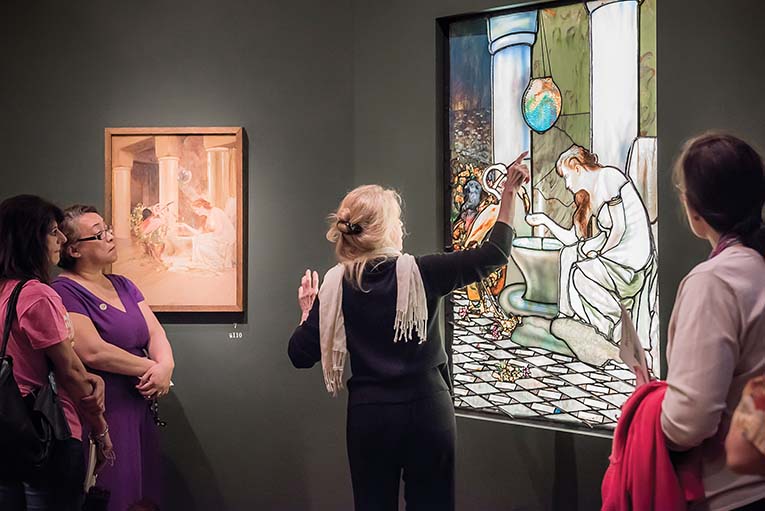 “The city of Winter Park has an eclectic vibe. It can feel artsy and chill and then very urban and upscale. The restaurants and bars can feel more classy and ritzy at night, but during the day the seating outside makes it feel homey and alive,” elaborates Gearhart.

Longtime resident Sandra Powers has called Winter Park home since 1992 and has seen changes, particularly Park Avenue where upscale chain stores have replaced several local indie shops. “The independent boutiques like Tuni are still my favorites. We even have an independent bookshop [Writer’s Block Bookstore], which I love,” she points out. “I’ll forever miss Jacobson’s. I bought my mother-of-the-bride dress there and clothes I still wear.”

In the last 10 years as Winter Park has progressed, and its population and needs changed, Mayor Steve Leary says, “I think we have responsibly built on the foundation. We have been true to our core: an upscale old village.” It’s the blend of new and old that helps make Winter Park a great place to live, he points out.

Among recent investments to further enhance the community, Leary lists: the purchase of 55 acres of wetlands in the Howell Branch Preserve, the restoration of Winter Park Country Club municipal golf course, the building of a library and events center, the revitalization of Hannibal Square and the installation of a fiber optic network.

Going forward he says, “We are catering to younger families, the average age is 44 now. Even the old-timers think it’s a good idea to welcome young families into the community.” After all, they are the future of a city that began 162 years ago.

This article appears in the July 2020 issue of Orlando Magazine.
Categories: News and Features
Tags: great neighborhoods, Orlando, Winter Park
Want to read the whole issue? Download and read this issue and others on Magzter.