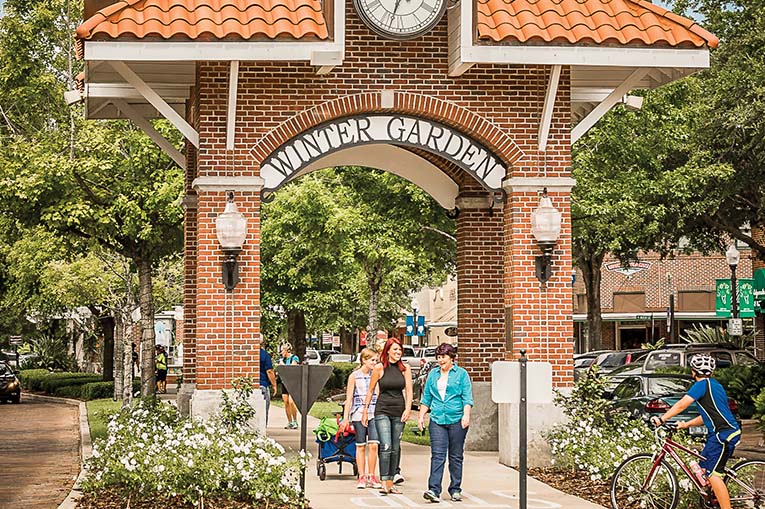 The scenic 22-mile-long West Orange Trail, which passes through historic downtown Winter Garden, is ideal for anyone on two feet or two wheels (ROBERTO GONZALEZ)

There was a time when Winter Garden, with its location in far western Orange County, seemed distantly removed from Orlando proper. But these days, the pleasant town—small city, really—is just a quick toll road drive away from downtown and continues to draw both the thousands of people who are moving to Central Florida as well as local day trippers. Wooing these new residents and visitors are myriad charms, including a reverence for the area’s heritage, celebration of the outdoor lifestyle, and a pride of place that’s not always easy to find in Greater Orlando. In a sense, Winter Garden offers a delightful contrast to other suburban communities, from its hilly topography to its preservation of history.

The area, located along the southern shores of Lake Apopka, first drew settlers in the 1850s who were eager to farm the fertile soil. Citrus groves and vegetable crops thrived, and 30 years later, the Orange Belt Railway built through this part of the state provided a convenient way to ship all of that glorious produce north. Settlers continued to flock to the region and in 1908, Winter Garden was incorporated as a city.

From then, the area boomed. When fire wiped out most of the town’s wood frame buildings, the city rebuilt with the iconic red brick that can still be seen today throughout the historic downtown area. The building boom continued through the 1920s, when the Edgewater Hotel opened to serve the burgeoning tourism industry. While the citrus business was still king, Lake Apopka also began drawing wealthy visitors looking to fish its plentiful waters. Indeed, Florida’s fourth largest lake emerged as the East’s “largemouth bass capital,” reportedly enticing celebrities of the day such as Humphrey Bogart and Clark Gable for a stay at the Edgewater.

While development continued through the first half of the century, things began to slow in the 1960s, as Lake Apopka’s once pristine waters suffered the effects of pollution from nearby farms. In addition, the construction of major highways curbed traffic through the area.

A group of concerned citizens decided they weren’t going to let the city go down without a fight, however, and the 1990s ushered in a time of stewardship and rejuvenation for Winter Garden.

Around the same time, the State of Florida began taking steps to clean up Lake Apopka. It would be a long process, which included reducing the amount of phosphorus going into the lake by purchasing surrounding farmland and restoring the natural wildlife balance. The multi-year, multi-step approach has drastically improved the health of the lake over the past 20 years. 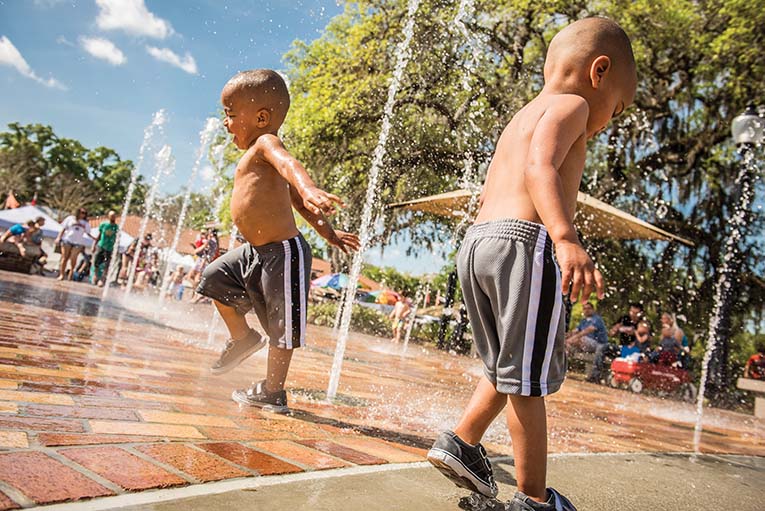 With buildings protected and the restoration of Lake Apopka well underway, the focus shifted to the West Orange Trail. The 22-mile long paved trail, completed in 1999, parallels old rail lines from Apopka southwest to Lake County and runs right through the center of the historic district. Visitors and locals who come to bike or walk the trail often enjoy a stop at local shops and restaurants, and even stay in the Edgewater Hotel, which was restored and reopened 2003.

Since 2000, Winter Garden has continued its transformation into one of Orange County’s hippest locations. The Winter Garden Farmers Market, which takes place every Saturday from 9 a.m. to 2 p.m., is an area favorite, drawing residents as well as fans from other zip codes. The market takes over the pavilion in the city center and radiates out from there, with plenty of locally grown produce as well as booths offering everything from flowers and honey to baked goods and dip mixes. Live music is a staple of the family- and dog-friendly gathering too, which gives it the feel of a weekly festival.

Plant Street Market is another point of interest, and a favorite local gathering spot. Anchored by Crooked Can, a local craft brewery, the food hall offers a wide array of prepared foods and staples from 20 different vendors. Grab a beer and relax on the patio with a slice from Michael’s Ali Coal Fired Pizza. Add a decadent side of pasta from Mac’d Out, or indulge in a taste of the Alpine with Raclette at Morthan Cheese. Cruise the vendors to take home proteins for the evening from The Local Butcher and Market, sweet treats from David Ramirez Chocolates and so much more.

During its fairly short history from incorporation until today, Winter Garden’s story has been a dynamic one. The city that burned bright and then faltered for a bit during the late 20th century is poised to move forward full speed ahead. And with surrounding orchards giving way to the master-planned community of Horizon West, which seems to be taking style cues from its elders, the future continues to look bright for the picturesque town that’s located a short drive from Orlando’s biggest tourist attractions.

This article appears in the July 2020 issue of Orlando Magazine.
Categories: News and Features
Tags: Orlando, plant street, west orange trail, winter garden
Want to read the whole issue? Download and read this issue and others on Magzter.