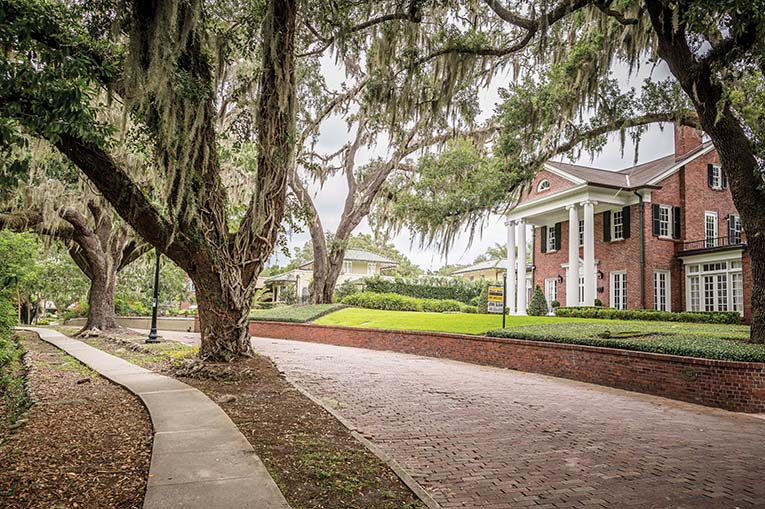 No cookie-cutter architecture here: The homes in Delaney Park and its adjacent neighborhoods each have a singular style, from stately Colonial to quaint bungalow (ROBERTO GONZALEZ)

When Orlando pioneer and merchant James Delaney was ready to build his family home in the late 1870s, he purchased 40 scenic acres near two lakes just south of downtown. History proved him to be a savvy real estate investor. More than a century later, the neighborhood now known as Delaney Park is still a highly desirable place for families, couples and singles to set up house.

Delaney Park and the surrounding neighborhoods of Lake Davis, Lake Cherokee, Lake Weldona, Lancaster Park and Wadeview Park are a harmonious collection of quiet residential streets with picturesque parks and lakes in close proximity to busy shopping districts and major cultural venues. The area is framed by the 408 Expressway to the north and Orange Avenue to the west, providing easy access to almost anywhere in Central Florida.

A focal point of the community is Delaney Park itself, one of Orlando’s oldest. Just about any day of the week, local residents are out running, playing softball or tennis, or spending time with their kids on the playground under the shade of giant spreading oaks.

Resident Doug Robinson can frequently be found walking his dog, Oscar, through the park’s cool grass. Robinson works in Downtown Orlando and likes the community because “it’s quiet, yet close enough to downtown to walk, bike or take transit to work.”

Tom and Marie Shumilak, who both work in creative fields, often take their easels and acrylics to the park to unwind and practice their plein air painting skills. “We’ve met other artists this way,” Shumilak says. “We’ve discovered there are some very talented people living in the area.”

The Shumilaks were just starting married life when they bought their 1930s modernist-style home here in 1996. “Delaney Park is so idyllic with its red brick streets and old oak trees,” Shumilak says. “We like the architectural diversity and especially the historic homes around the lakes.”

It’s a common refrain among residents who have lived here for decades, and for newcomers looking to move into the neighborhood. The area’s distinctive homes depict a range of architectural styles, from Mediterranean to Tudor Revival to Colonial, that span decades, mostly from the 1920s to the 50s.

Lake Davis resident Rose Beiler moved into her vintage 1940s bungalow in 2001. “I ended up in this neighborhood as a house sitter and fell in love with it,” says Beiler, a professor and historian. “I chose to live here because of the people, the architecture, diversity and the lifestyle. I didn’t want a development where all the houses looked the same.”

Another draw for her was the green space and wildlife—Lake Davis is nearby—and, on the flip side, “I can walk 15 minutes and have access to downtown culture.”

More importantly, Beiler feels a genuine sense of community. “People talk to one another and help each other here,” she adds. Ten years ago, Beiler and her neighbors revived their neighborhood association so they could start work on getting a permit and grant for a community garden, which eventually broke ground in 2013.

In the past decade, development in Downtown Orlando and along Orange Avenue has been a boon for these communities, increasing their appeal to potential home buyers. Since the Dr. Phillips Center for the Performing Arts opened in 2014, the city’s most dynamic performance venue has presented a steady stream of Broadway hits such as Hamilton and Mean Girls and brought world-class artists like Diana Ross and Willie Nelson to town. This cultural gem on the south side of downtown is within walking distance to residents of Delaney Park, Lake Davis and Lake Cherokee. 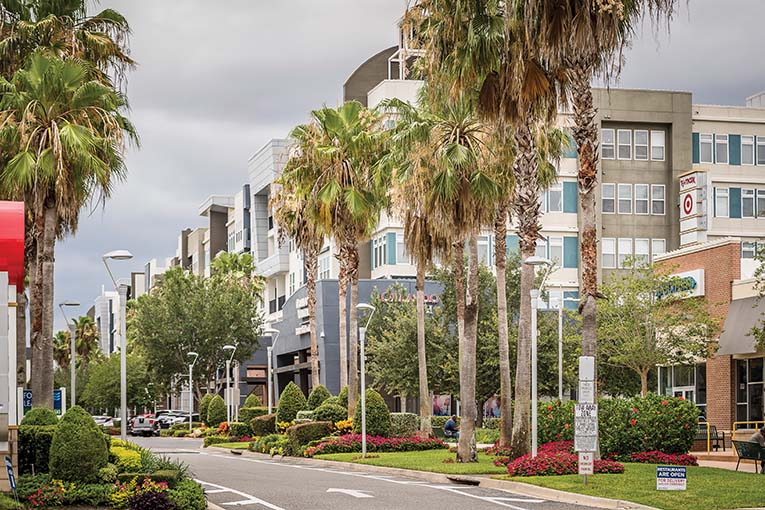 The SoDo District has revitalized the Orange Avenue corridor with a savvy mix of retail, restaurants and residential. (ROBERTO GONZALEZ)

Another major transformation began to take place along Orange Avenue, south of the 408 Expressway. Known at the time as Downtown South, this once-industrial area was designated an Orlando Main Street District and received a hip, new moniker: SoDo (South of Downtown). Since 2010, SoDo has developed into a thriving business region with trendy boutiques, major retailers like Target and TJ Maxx, stylish restaurants like Delaney’s Tavern, and modern, high-rise apartments.

The SoDo District “works in partnership with the neighborhood improvement district of the City of Orlando to improve the street landscape and roadways, recruit new businesses to the area and support existing businesses,” says Linnette Boldig, executive director. Going forward, the organization’s next big step is the revitalization of Division Street, which runs along I-4. “Our goal is to add a bike trail, art and sculptures within the next two years,” Boldig says.

A vital part of the neighborhood’s evolution is Orlando Health’s sprawling medical campus and the Pulse Memorial, which honors the victims of the 2016 brutal attack. Behind the medical complex sits Orlando’s historic train station. Built in 1926, the Mission Revival-style structure has been preserved through several major renovations. Today, it serves passengers of Amtrak and SunRail.

The creation of the SoDo District has been a welcome addition to the area with great shopping and eateries, but it’s the residential communities that people love. Says Shumilak: “We like to ride our bikes 10 miles in any direction and get different experiences. Once we get back home, though, it always feels like the best spot. It’s so beautiful here.”

This article appears in the July 2020 issue of Orlando Magazine.
Categories: News and Features
Tags: delaney-park, great neighborhoods, Orlando, SODO
Want to read the whole issue? Download and read this issue and others on Magzter.