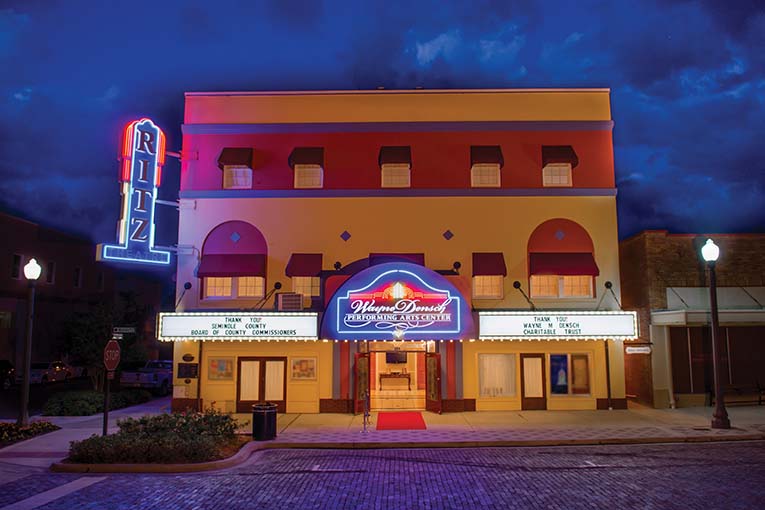 The St. Johns River links with Lake Monroe as it flows northward along the shoreline of Sanford. Just as it was important for settlers who in 1837 traveled the waterway to Central Florida, the river continues to define Sanford’s character today. Although in modern times, it serves more for recreation than as a mode of transportation. Sailboats fill slips at the Monroe Harbour Marina, which welcomes transient boaters and liveaboards as well as local sailors. From the city’s RiverWalk, pedestrians and bicyclists enjoy unspoiled views of the azure waterway.

It was the river that propelled city founder Henry Shelton Sanford in 1870 to plan what he called “The Gate City of South Florida,” a transportation hub for all of southern Florida. Sanford wanted to develop citrus crops; however, Central Florida’s winter frosts doomed the orange groves, and farmers turned to growing vegetables, particularly celery—which explains Sanford’s nickname, “Celery City.” By the early 20th century, a huge vegetable shipping center had evolved, and produce was moved by both water and rail, just as Sanford had envisioned.

Ask any resident what makes the city special and their answer is the river, or more specifically, the RiverWalk—evenly tied with the city’s ever-evolving Historic Downtown.

Denny Gibbs, who has lived in her 1917 bungalow in Sanford’s Historic District for the last 20 years, says, “We walk and ride bikes on the RiverWalk. It’s enormously popular and packed on weekends. Someone should open an ice cream shop there.”

A breezy stroll on the RiverWalk includes a stop at one of several gazebos with hanging swings, perfect for resting and watching boat traffic. A series of plaques called Pathways to History document Sanford’s past and are installed along the wide sidewalks; it continues to Veterans Memorial Park, where memorial bricks honor by name those who have served our country. Sanford’s military ties run deep, dating back to World War II when a United States Naval Air Station was built here. From 1942 to 1969, it was used off and on for military operations; today it is Orlando Sanford International Airport.

A few blocks from the water is First Street, the heart of Historic Downtown and home to well-preserved structures housing restaurants, bars, antique stores, galleries and even an old-school barbershop. Noteworthy buildings include the First National Bank, erected almost 100 years ago in 1922, and nearby the Wayne Densch Performing Arts Center, constructed in 1923.

Gibbs remembers the days when, she jokes, “We used to ‘bowl’ down the streets of downtown, but now on a Friday night there are traffic jams.” Meander First Street and its arteries and you’ll find places like Celery City Craft where a younger crowd sips craft beers on a tree-lined patio and munches on rolls and pot stickers from the Sushi & Seoul food stand. An older crowd looking for something quietier might go to Imperial, a bar tucked into the back of Washburn Imports. “They have a fabulous cocktail menu, and it’s not loud,” she points out.

Continuing, Gibbs says, “You can’t go wrong eating anywhere in Sanford.” Smiling Bison, known for bison burgers, and The Tennessee Truffle, a tiny Southern-inspired place, are on her radar. New on the scene is the food hall, Henry’s Depot. The large gray-painted building with a big back deck sits on the site of one of Florida’s first railroads run by entrepreneur Henry B. Plant. Among the local vendor offerings are cocktails, craft pizza, tacos, gourmet sandwiches and ice cream, plus entertainment. 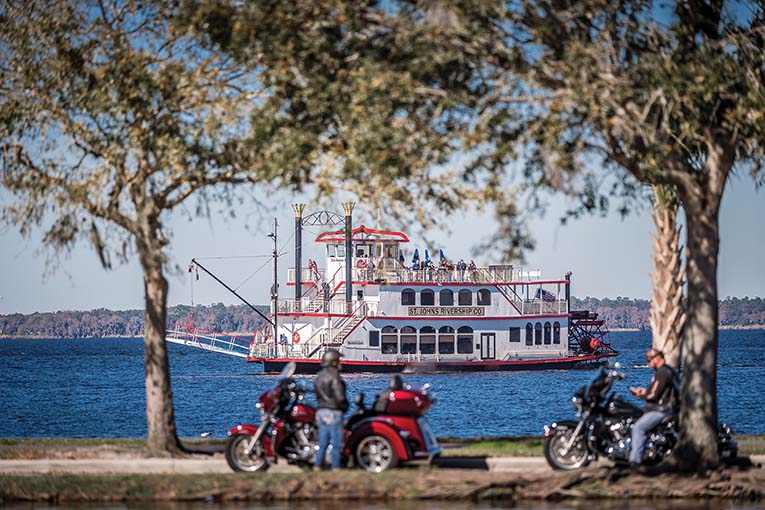 “There’s been a huge renaissance in Sanford, especially in the downtown corridor,” points out former mayor Jeff Triplett. (Triplett recently resigned as mayor to run for Seminole County Property Appraiser.) “We put a lot of money into First Street with brick streetscapes and lighting—beautification—about 10 years ago.” Although there were only a handful of businesses at the time, Triplett explains that it served the business community to come in and redo the buildings. “This administration got out of the way of business,” he says. The result was a resurgence created by the private sector through community events, eclectic shops and savvy marketing. “They [business owners] did a great job of being the mouthpiece for the City of Sanford,” he adds.

Meanwhile just south of the downtown, residents were busy restoring vernacular homes in a neighborhood complemented by pocket parks, old churches and sprawling oak trees. “So many of the homes in the historic district have been renovated, and we’re seeing lots of young families move in. We’ve actually become a trendy destination for owner-operated restaurants, live music, theater and lots of creative events,” notes longtime resident Margie Chusmir, who has lived in the Historic District for 22 years.

Looking to the future, the city is making plans for Phase 3 of the RiverWalk. Upon completion in late 2021, it will be five miles long and extend to Interstate 4 where it will connect with the Florida trail system. The RiverWalk will also complete the 26-mile loop around Lake Monroe made up of several scenic roads and trails.

“We can hold marathons and triathlons around the lake—we’ll just clear out the alligators for the triathlons,” Triplett says with a smile. “That’s going to be huge for us from both the social side and the healthy side of being outdoors.”

This article appears in the July 2020 issue of Orlando Magazine.
Categories: News and Features
Tags: Orlando, Sanford
Want to read the whole issue? Download and read this issue and others on Magzter.